TV Eye: Zeroing in on a ZIP Code

Filmmaking brothers turn a camera on their hometown in 45365

This is the time of year when thoughts of family, friends, and faith come to the forefront. Pop culture teaches us that this season is either full of idyllic wonder or something to morosely trudge through. The truth, I suspect, is somewhere in the middle. Which is why I'd like to nominate 45365 as another of the must-watch films during this holiday season: It hits all the notes about home and family and place just right. The independent film – by first-time directors and brothers Bill Ross IV and Turner Ross – screens as the next Independent Lens feature on PBS.

No, there aren't any sleigh bells ringing or angels visiting the small town of Sidney, Ohio, the Ross brothers' hometown and the centerpiece of their film (the title of which is Sidney's ZIP code). Most of all, there is no droll voiceover or pushy score to remind us how we're supposed to feel. All we receive are images and ambient sound. People do speak – with amazing candor, it seems – which is a testament to the insider access the filmmakers had with the people and places of their hometown. But it's what's said in the silences that makes the film so incredibly fascinating, funny, magical, and ultimately moving.

Filmed over nine months, the Ross brothers take their camera all over Sidney, capturing what some might call the unseemly (there's a straight-out-of-Cops moment in which a bare-chested man is arrested), alongside the congenial (as when a gathering of elderly women at a nursing home discusses their needs and likes in men – and I don't think they're talking about having someone around to open a stubborn jar or kill a spider). All the subjects are treated with evenhanded respect and dignity.

There are many familiar and endearing images for anyone who grew up in the Midwest; the film takes flight when the camera settles its gaze on the otherwise ordinary and reveals another layer, and then another. I suspect these moments occur for viewers at various places, but I know that my first moment came when watching children flying through the air on a carnival ride at night. Magical! Another moment was listening to the bare-chested man in the back of the squad car, speaking to the cop who'd just arrested him. I can't even tell you why it's touching – it's something like when a distant relative or stranger is able to reveal his truths to you but is unable to articulate the same to his intimates. That the Ross brothers captured these moments is nothing short of remarkable.

45365 won the 2009 Documentary Feature Grand Jury Award at the South by Southwest Film Festival as well as the Chaz and Roger Ebert Truer Than Fiction Award at the 2010 Independent Spirit Awards. "[T]his achingly beautiful film ... evokes what Winesburg, Ohio might have looked like as a documentary," Roger Ebert of the Chicago Sun-Times wrote. I couldn't have said it better myself.

Later this month, PBS broadcasts The Calling. I've only seen the first part of this two-part event, and I can't wait for more. Unlike the well-meaning but turgid God in America (which you can watch online at www.pbs.org), The Calling follows seven contemporary Catholic, Protestant, Jewish, and Muslim Americans who have heard the call of their faith and are determining the best way to follow their individual paths.

"The United States is one of the most religiously observant and spiritually diverse countries in the world," the film's press materials point out, "yet mainstream media has surprisingly underrepresented the significance of faith in the U.S. Pluralism has been explored almost exclusively in terms of race and culture, while explorations of faith often focus on scandals or extremism." Very true, which is why this nuanced, intimate, and sincere film is so enormously engaging.

More on this two-part, four-hour screening in next week's "TV Eye." 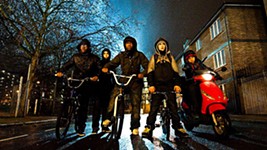 The Place Is the Thing
Crescent City connection: 'Tchoupitoulas'