There's a certain unbendingness to film criticism, at least the kind of criticism that codas in a star rating or letter grade. But Roger Ebert – co-originator of that most famous of movie reviewer shorthands, the thumbs-up and -down – isn't embarrassed to admit when he got it wrong. In this third collection of his "Great Movies" essays (previously published on the Chicago Sun-Times website), Ebert reassesses classic films, which sometimes means redressing wrongheaded early reads (Killer of Sheep and Last Tango in Paris' Maria Schneider, for instance, are both rehabilitated here). That's a rare quality in a film critic, but that term – its exclusivity – doesn't begin to contain the kind of writer Ebert has blossomed into since post-surgery complications in 2006 rendered him unable to speak. Since then, he's become an indefatigable blogger, producing sprawling think pieces – intimate without the ickiness of the confessional – on everything from Darwinism and the defense of elitism to alcoholism and, somewhat famously, the questionable quality of video games. Film scholar David Bordwell, who writes the foreward to Great Movies III, gets the closest to articulating Ebert's evolution into a cultural commentator: He calls him a "man of letters." Besides having the pleasing ring of the Algonquin Round Table about it (and one suspects Ebert could easily hold his bon-mot own with that crowd), "man of letters" also gets at the expansiveness of Ebert's interests and the nuts-and-bolts precision of his craft. His retelling of Meryl Streep's comic high point in Adaptation, in which she "ingests an obscure Indian drug, wriggles her toes, and does a phone tone duet," is as delightfully spry as the scene it describes, and he shows Wildean wit with his estimation of Audrey Hepburn in My Fair Lady: "That Hepburn did not do her own singing obscures her triumph, which is that she did her own acting." His has a deceptively conversational style – the kind you might call readable if that word didn't now whiff of dismissiveness. Scrap readable, then; substitute vibrant and vital.

David Thomson is another titan in the field, albeit a far more curmudgeonly one. Indeed, one of the great pleasures of The New Biographical Dictionary of Film is its author's prickliness. (He ruthlessly dispatched Wes Anderson in the 2002 edition thusly: "Watch this space. What does that mean? That he might be something one day.") For this fifth edition (the first one came out in 1975), Thomson has updated the 1,000-plus pre-existing entries and added 130 more. Yes, Anderson warrants more than 14 cutting words this time around. But the omission of key women in film, especially contemporary artists, continues to rankle. Notably absent: Lisa Cholodenko, Nicole Holofcener, Catherine Breillat, Tamara Jenkins, Barbara Kopple, Deepa Mehta, and Julie Taymor. And though the rightfully lauded editor Walter Murch gets an entry, his contemporaries Dede Allen (Bonnie and Clyde) and Thelma Schoonmaker (Scorcese's longtime collaborator) don't make the cut. Gripes aside – and, truly, Thomson himself is a griper par excellence – The New Biographical Dictionary of Film is indispensable, not to mention legitimately fun for any cineaste. It's a rabbit hole kind of read, wherein a quick skim of, say, Frederic March's filmography will send the reader capering over to check out his Dr. Jekyll and Mr. Hyde director Rouben Mamoulian, who's two entries away from Joseph Mankiewicz, who wrote A Letter to Three Wives, and that might get a person thinking about Max Ophüls' Letter From an Unknown Woman ... until two hours later you find yourself glassy-eyed on Peter Ustinov's page, gorged on film. But what a feast.

Barbarians at the Box Office
AFS Documentary Tour: 'For the Love of Movies' 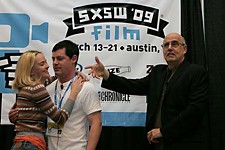 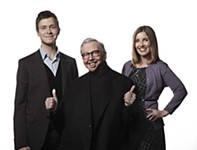