Is 'Carnival Magic' the weirdest movie ever made for kids? 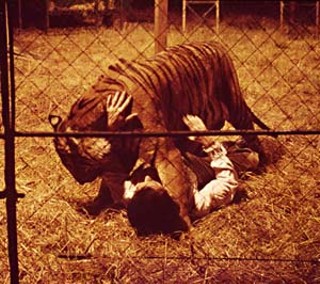 A trainer gets mauled in Carnival Magic.

In the beginning, circa 1981, Carnival Magic was supposed to be a "kids' film:" whimsical, entertaining, semiprofitable. In the end, Carnival Magic screened barely at all; those who saw it were, shall we say, permanently nervous in the company of chimpanzees; and the film's director, Al Adamson, went missing, along with the film. Adamson wasn't known for his facility with children's films. He was a gutter auteur prone to cranking out drive-in and grindhouse fodder with rock 'em, shock 'em titles like Psycho a Go-Go, Satan's Sadists, and The Naughty Stewardesses (not to mention its follow-up, Blazing Stewardesses).

After trading his cinemania for a more prosaic life in real estate following the lukewarm-to-nonexistent reception of this, his one and only kids' film, Adamson was later found murdered by a building contractor, his corpse entombed in cement beneath a new Jacuzzi. It was an ignoble end to an already spectacularly weird career, and the only existing print of Carnival Magic was presumed lost as well.

"I didn't know about the movie until I already owned it," explains Alamo Drafthouse programmer Zack Carlson, who, as he says, stole a print of the film from his then-workplace, a fourth-run, dollar theatre in Olympia, Wash., that was closing. "Actually, my friend Jarod Warren, the projectionist, took it. It was an entire movie on one giant reel, and written on the side of it, in Sharpie, it said 'Carnival fucking Magic.'"

Cut to a month or so later: Carlson and friends screen the one-reel wonder for a handful of friends. "It completely decimated everyone. We couldn't understand what the movie was, because although it's made under the guise of a children's film, it features domestic abuse, vivisection, and, even more uncomfortably, it just has this pervasive air of stale, alcoholic uncles. It's the most quietly inappropriate kids' movie ever made. You can tell it was made by people who have never spent any time around children."

Elvin Feltner, the film's producer and the man who penned its inscrutable five-page story treatment, is one of those people. Feltner, then as now the Florida-based owner of the largest independent film copyright library in the world – including such non-42nd Street fare as Frank Capra's Meet John Doe and Merchant Ivory's The Bostonians – considers himself a force for family entertainment in a world where G- and PG-rated films are no longer the norm – hence his involvement with the innocuously titled Carnival Magic. (As it turns out, Feltner has nine other prints of Adamson's film, a fact which has done nothing to diminish Carlson's enthusiasm.)

"Some magazines in the Eighties called me the 'best new force for family entertainment,'" Feltner says, adding that he has "tried to do that all along. I think there's enough garbage in the media. It's kind of nice to have a film that's kind of uplifting and fun to enjoy."

Carnival Magic, like counting carnies' teeth and riding Tilt-a-Whirls on Robitussin, is nothing if not fun. (Film Chest/Vigil Films & Entertainment will release Carnival Magic on DVD and Blu-ray on Jan. 25.) Populated by a ramshackle cast (including Maniac Cop 2's Joe Cirillo and Guiding Light stalwart Don Stewart) and possessed of a scuzzy, desperate undertone that's at once awful and awe-inspiring, this just might be the strangest film Adamson ever made.

"I had planned on making a sequel," Feltner explains. "I was going to use the same cast and make something along the lines of Babe: Pig in the City, but with a chimp. It didn't happen."

"It's really a special movie," Carlson adds. "It's stunted and outrageously limited in many ways, but all the better for it. It's a beautiful example of somebody doing the wrong thing."

Carnival Magic screens Wednesday, Dec. 15, 11:55pm at the Alamo at the Ritz (320 E. Sixth). Producer Elvin Feltner will be in attendance.