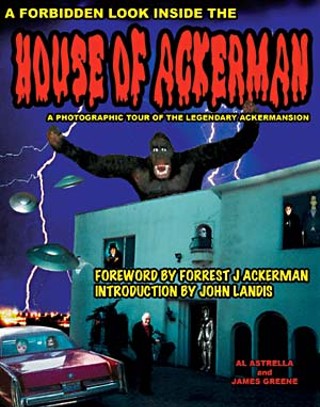 A Forbidden Look Inside the House of Ackerman: A Photographic Tour of the Legendary Ackermansion


Arriving alongside the recent announcement that Austin's king geek, Harry Knowles, of Ain't It Cool News, will be taking over the editorial reins for the online version of the recently reincarnated Famous Monsters of Filmland magazine, this pictorial peek behind the creaking doors of fabled FM founder Forrest J Ackerman's overstuffed abode is well-timed if not exactly a paragon of punctilious publishing aesthetics. To wit: This one's for the fan-addicts, the monster kids who came of age during FM's heyday during the mid-Sixties to early Eighties, and those mad for the minutiae of monster world ephemera. Design majors, on the other paw, will shriek and fork the evil eye before bursting into columns of green flame when seeing the fanzine-esque whirlwind of less-than-fantastique layout choices on view. The table of contents alone is enough to drive publishing perfectionists mad, mad I tell you, but authors Astrella and Greene have come to praise Ackerman, not to bury him (been there, dug that), and thus the cheapo look of this pricey book can be forgiven. More than anything else, this is a labor of love, and it shows in every grainy, four-color snapshot. House of Ackerman is, in essence, a bold attempt to re-create, via photos (some blurry, some poorly lit, but many downright amazing), the experience of visiting Ackerman's beloved horror and science-fiction-film-themed home, the Ackermansion in "Hollyweird, Karloffornia," which the owner regularly opened to fans, friends, and tourists alike from 1951 until shortly before his death in 2008. A brief word of – as the late, pun-happy Ackerman would so cuttingly put it – axeplanation for those unfamiliar with Ackerman's lengthy, genrefied curriculum vitae: This is the man who coined the phrase "sci-fi," palled around with best friends Ray Bradbury and Ray Harryhausen, and influenced everyone from Stephen King to Joe Dante, John Landis (who provides a heartfelt introduction) to Steven Spielberg. In short, the man who made the men who made the monsters. Visual treasures abound: photographs (with accompanying explanatory text) of the cape and oh-so-pointy dental prosthetics Lon Chaney Sr. donned in the legendary lost film London After Midnight, the ornate signet ring Bela Lugosi wore in Tod Browning's Dracula, an early – and rejected (oh, the ignominy) – manuscript tossed over the transom by a hopeful teenage Stephen King, and pioneering stop-motion animator Willis O'Brien's original, articulated model for King Kong, which currently resides in another, presumably equally splendid, household – that of Steven Spielberg. House of Ackerman is a droolworthy tour for the boys and ghouls who never got the chance to make the actual pilgrimage to Uncle Forry's manse on their own. And if it's a bit rough around the edges, is somewhat overstuffed, or even occasionally threatens to slip over the edge into headache-inducing aesthetic fanarchy, well, so much the better. After all, you did axe for it, didn't you?

Forrest J Ackerman, Inside the House of Ackerman: A Photographic Tour of the Legendary Ackermansion, Famous Monsters of Filmland