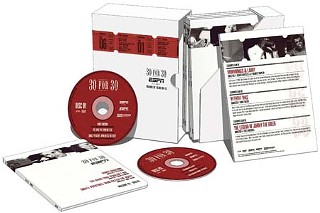 
Inspired by its own 30th anniversary in 2009, ESPN tasked 30 (or so) accomplished filmmakers to document a sports story from the past 30 years that had a lasting and significant impact on their lives. These films have been airing on ESPN since October 2009, and many have been screened at prestigious film festivals, including Austin's own South by Southwest. The six-DVD box set 30 for 30: Volume 1 captures the first 15 films of the now-completed series along with plenty of bonus footage for second- (or third-) time viewers, although, disappointingly, some of the films' bonus footage is limited to the directors' statements which aired during commercial breaks on ESPN.

Whether you're a sports fan or not, there is no denying the impact that the games and the athletes who excel at them have upon our society, and the amazing group of directors assembled here share stories that will have even the most ardent sports-hater in your family/crew fully engaged. Peter Berg's Kings Ransom starts off the series with the tale of Wayne Gretzky's move from Edmonton to Los Angeles, when "The Great One" bolted from the land of hockey for Hollywood, and the effect this had on both cities and the popularity of the sport in general. In The Band That Wouldn't Die, Academy Award-winner Barry Levinson (Rain Man) documents the dread of a city and the resilient marching band that was left behind when the Baltimore Colts literally snuck out of town in the middle of the night. The swagger of the 1980s Miami Hurricanes' college football dynasty as retold in The U is a highlight at 102 minutes (most of the films run 51 minutes) and is deserving of the added length: What was once a college football afterthought, the Hurricanes of the Eighties and their star players (Michael Irvin, Vinny Testaverde) and coaches (Jimmy Johnson, Howard Schnellenberger) created a dynasty by focusing on stellar homegrown Florida talent that brought a bluster to the game heretofore unseen. Former N.W.A rapper and actor/director Ice Cube's Straight Outta L.A. tells of the time when gangsta rappers wouldn't be caught dead without a Raiders lid and when the players on the then-L.A. Raiders were as frightening as some of the lyrics coming straight outta Compton. Run Ricky Run shares the fascinating story of Ricky Williams' "lost years" when he stepped away from football (and a lucrative contract) and into a world free of material and societal restraints. He allowed director Sean Pamphilon almost complete access, which enabled the filmmaker to capture his many contradictions while still painting the soul-searching star running back with a sympathetic brush. Other highlights include No Crossover: The Trial of Allen Iverson from brilliant doc filmmaker Steve James (Hoop Dreams) and Muhammad and Larry from the legendary Albert Maysles (Gimme Shelter). It might be ESPN's birthday celebration, but it's given us the holiday gift with this set.