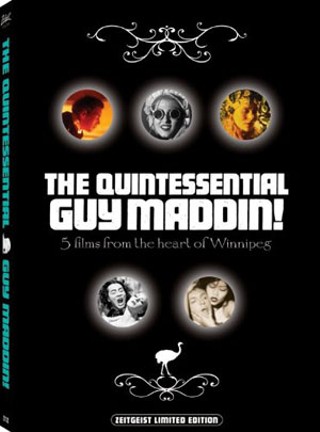 The Quintessential Guy Maddin!: 5 Films From the Heart of Winnipeg


The Quintessential Guy Maddin! box set, which will be released Dec. 14, crams as much fog, snow, hiss, and crackle into four discs as possible. And while providing an indispensable survey of one of the most creative directors working today, it also offers a through-line of his obsessions and neuroses – sometimes hilarious, sometimes gruesome (often both simultaneously), and nothing less than pure spectacle.

It's no accident that two corners of the love triangle at the heart of Archangel (1990), Maddin's first feature, are amnesiacs. (Nor is it surprising that they're both men, as refuted masculine desire, either scorned, registered impotent, cuckolded, or internalized to the homoerotic, figures prominently in the Maddin cannon. Sissy Boy Slap Party, anyone?) It's also in Archangel's tale of a peg-legged Canadian grunt shipping back from the front that we see the trappings that will come to define his work: silents-era World War I conflict, Canadian identity politics vs. those of decidedly more exotic locales (wonderfully utilized in his 2003 breakout, The Saddest Music in the World), and, above all, the sometimes suffocating bond of family.

That topic is deconstructed with a perverse, giddy glee in 1992's Careful, the set's harrowing peak of familial and sexual hang-ups. Despite Careful's avalanche of Oedipus and Electra complexes, the tragedy of two Alps families is buoyed by tongue-in-cheek narration and titling; silents-aping, self-consciously stagey direction; and, of course, those timeless smeared sepia visuals. But even these consciously distancing devices, like humor, lend the film momentum – the fascist Butler School that brothers Grigorss and Johann attend initially plays for laughs, until it's apparent their buttoned-down demeanors exemplify the repression that propels the murderous plot forward.

Maddin attempts to transplant his delirious, melodramatic exaggeration into more traditional avenues with Twilight of the Ice Nymphs, trading in his forgotten film stock for Techicolor hues. Operating outside his comfort zone, what could have been magical instead feels restrained. His next full-length effort, Dracula: Pages From a Virgin's Diary, instead takes a hairpin turn from such concessions, being an entirely silent retelling utilizing the Royal Winnipeg Ballet to hypnotic, timeless fashion.

Produced between Saddest Music and Brand Upon the Brain!: A Remembrance in 12 Chapters (two further refinements of Maddin's style not included in the set), Cowards Bend the Knee is a fitting coda, focusing on the romantic exploits of hockey-playing Canadian everyman ... Guy Maddin. Entirely silent but untethered from the familiar Dracula narrative, it relies on indelible visual sequences, like a hair salon that doubles as an abortion clinic. Developed as a museum installation piece with each vignette viewed through a separate peephole, it's a perfect representation of the high art/low brow confluence of Maddin's sensibility and the function it, like any other art, provides – to change the way we look at things. 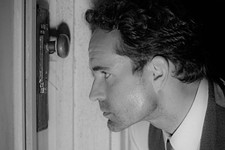 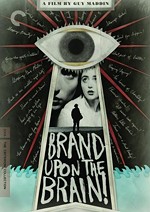 Brand Upon the Brain!
Another ambitious, audacious entry in the canon of Canadian auteur Guy Maddin