TV Eye: No Matter Where You Go, There You Are 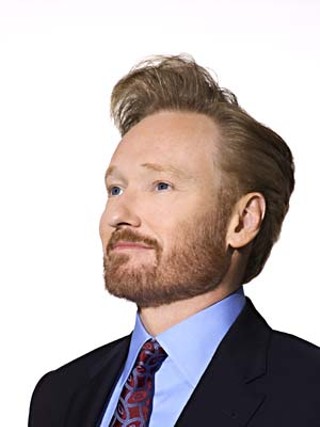 I adore Conan O'Brien and am so glad to see him on TV again. This week's premiere of Conan, O'Brien's new late-night talk show on basic cable network TBS, following his very public dissing by NBC last year, has been the source of much speculation, gossip, lore, and lip-flapping among those who follow these kinds of industry dramas on a regular basis. As for the general public, and especially those who identify themselves as members of Team Coco, I suspect they're just happy to find the funnyman on the air (and online) again. At last glance, the Conan O'Brien Presents: Team Coco page on Facebook had more than 344,000 fans – and that's not even counting followers on his Twitter account, the Team Coco website, and other related online media.

As luck (or karma) would have it, the week before Conan premiered, Late Show With David Letterman (CBS) drew higher ratings than long-time late-night ratings winner The Tonight Show With Jay Leno – the show at the center of the O'Brien drama. But even that bit of ratings news had an extra karmic spin: The Daily Show With Jon Stewart over on Comedy Central out-performed both Letterman and Leno, something unheard of in the old world of TV. Note the use of the word "old."

On his opening night, O'Brien was as funny, energetic, and irreverent as expected. He poked fun at the late-night debacle he found himself at the center of, but even he had a moment of clarity when he admitted to his enthusiastic audience that what it really came down to was that he refused to take a job that would have him working at midnight. O'Brien expressed much appreciation to all his online fans who made his new appearance on TV possible, leeching as much self-effacing humor from the situation as he could. What he did not (and perhaps never will) concede is that when it comes right down to it, The Tonight Show really doesn't matter anymore.

In the old days, when it was all about the big three broadcast networks, the Tonight Show gig was the one all comedians sought. In the Johnny Carson years, it was a big deal when Carson invited a comedian making his first Tonight Show appearance over for some talk time on the guest couch. Prior to Carson's much-publicized retirement, all were abuzz over who would take the helm. At the time, Letterman seemed to be the heir apparent, so when Leno got the job, there was a mild uproar. Leno gleefully took the reins, Letterman eventually ended up at CBS, and other late-night programming began to appear. But that did not dampen the allure of The Tonight Show among viewers – that is, perhaps, until now.

The numbers for Conan's premiere were terrific – he beat Leno, Letterman, and Comedy Central's The Daily Show and The Colbert Report – but high viewer turnout was expected, especially in the show's inaugural week. What O'Brien and his people surely understand by now is that Team Coco did not emerge because O'Brien was ousted from The Tonight Show. It emerged because he was ousted from a berth on TV. Sure, there were lots of yuks drawn from the fact that Conan is now on basic cable. So what? If he were still on The Tonight Show, I'd watch him there. If he were on Late Show, I'd watch him there. If he were on BBC America, I'd watch him there. I follow him on Twitter. I'm a fan. I don't care where he is – as long as I can find him, I'm happy. Here's hoping that O'Brien finds happiness and satisfaction in his new gig and follows his own good advice from an interview in Playboy's December issue, when the magazine asked him to comment on his tumultuous year: