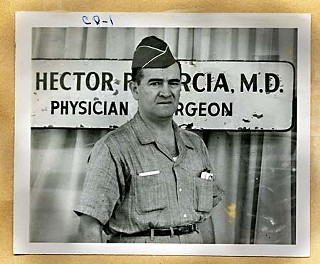 All good students of American history know who Lyndon Baines Johnson, John F. Kennedy, and Martin Luther King Jr. are. But given the shortsightedness over what is included in Texas history textbooks, students may know nothing about Dr. Hector P. Garcia, the Corpus Christi physician and civil rights activist who helped launch the American GI Forum. Even fewer know about Felix Longoria, a soldier from Three Rivers, Texas, who was killed in action during World War II. When Longoria's widow, Beatrice, sought to have her husband's wake in the town's only funeral home, she was told that no Mexicans were allowed. Beatrice Longoria then called the only person she thought could help her, Dr. Hector Garcia. That phone call was like the shot heard 'round the world for Mexican-Americans. Garcia sent angry telegrams to then-Sen. Johnson, President Truman, local newspapers, and others, after which, Felix Longoria was laid to rest in the Arlington National Cemetery with full military honors. But that's not the whole story, as filmmaker John Valadez reveals in his documentary The Longoria Affair, the next documentary in the Independent Lens series airing next week on PBS.

Valadez's carefully crafted documentary relates the stories of Garcia, Longoria, and even the Three Rivers funeral home director, Tom Kennedy, through first-person accounts from surviving relatives, historians, and other eyewitnesses. Garcia is given his due as a Mexican-American hero. He not only helped a fallen soldier receive justice but leveraged the Longoria incident to help usher in sweeping civil rights legislation that, among many things, eliminated poll taxes that kept the poor from voting (mostly black and brown voters in the South). To his great credit, Valadez does not shy away from the dark side of Garcia's ambition. And it would have been easy for Tom Kennedy to be cast as a flinty-eyed, mustache-twirling bigot. Instead, Valadez treats him with supreme compassion. Also a veteran, Kennedy was trying to make a new start in South Texas, after surviving a harrowing war injury that may have left him less able to cope with the harsh criticism thrust upon him when the Longoria story broke. By doing this, The Longoria Affair becomes a more complicated telling of history, a history that is not reduced to the good guys vs. the bad guys. But what the film does so well, perhaps unintentionally, is reveal the deep, systemic culture of denial that makes looking at racism from the personal perspective so difficult. Most can agree on what racism looks like on a national stage. But confronting one's own internalized bigotry is far less easy and an ongoing challenge.

Lost Sparrow (Nov. 16, 9pm). Filmmaker Chris Billing gets to the bottom of a long-held family secret to discover why his adopted siblings, two Crow Indian brothers, decided to run away from their small upstate New York family home, only to meet an untimely end. Why were the circumstances of their deaths kept secret? What were they running to? More importantly, what were they fleeing? An unflinching look at interracial adoption and the ghosts of family secrets.

Deep Down (Nov. 23, 9pm). Two close friends find themselves on opposite sides of the coal mining debate in this documentary based at ground zero of the controversy: the Appalachian Mountains of eastern Kentucky. While Beverly May is organizing her friends and neighbors to stop the destruction of the mountains she and her family call home, on the opposite side of the mountain, Terry Ratliff is on the brink of signing away mining rights to his backyard. Mining offers much-needed jobs, access to health care, and food on the table in this economically depressed area of the nation. But what does it mean when lives are cut short and much-needed health care is devoted to treating illnesses caused on the job? Just who is benefiting from the destruction of some of the most picturesque land in pursuit of the new black gold? Co-directed by filmmakers Sally Rubin and Jen Gilomen.