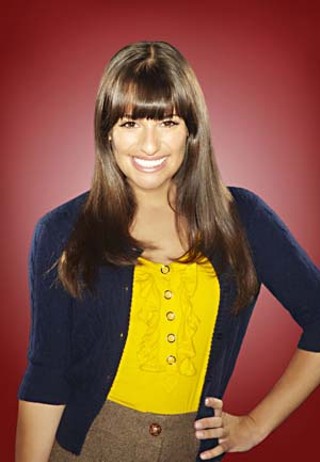 Totally Safe for Work. The GQ spread? Not so much.

I didn't see it coming. All those naughty photos of Glee cast members Dianna Agron, Lea Michele (pictured right, far more chastely), and Cory Monteith published in the November issue of GQ magazine were all over entertainment television and the Internet last week. In the photos, I saw lots of licking and pouting and caressing and the widest crotch shot of a panty-clad Michele that I would ever not want to imagine. The images were omnipresent because, well, that's what entertainment television and the Internet trade in, but even more so because the Parents Television Council made a stink about it. So, thank you, PTC. If it hadn't been for your tireless efforts, I might have never known those photos existed. Well, I suppose the word would have gotten out, but I would have had to search for the images. In other words, I would have had to make an effort to find them.

It's clear from the volume of PTC press releases, both on- and off-line, that it has considerable resources. The PTC seems to take the old "throw it at the wall and see what sticks" approach to media advocacy. When it doesn't stick, it moves on to the next "cause." Prior to the Glee spread (no pun intended), the PTC was worked up about $#*! My Dad Says, the CBS sitcom starring William Shatner. Although it appeared that no one at the PTC had actually seen the series yet, there was much fearmongering about it. The series opened to rocky ratings but has weathered the season premiere storm and continues. It's not the best thing on TV, but sometimes it's quite funny, in that old-timey, lob-and-hit joke-telling way. And look, the sky didn't fall. So the PTC moved on to the next project, which appears to be expressing horror over the Glee gals featured in racy photos.

According to PTC President Tim Winter, in an official press release: "It is disturbing that GQ, which is explicitly written for adult men, is sexualizing the actresses who play high school-aged characters on Glee in this way. It borders on pedophilia. Sadly, this is just the latest example of the overt sexualization of young girls in entertainment. ...

"By authorizing this kind of near-pornographic display, the creators of the program have established their intentions on the show's direction. And it isn't good for families."

"Overt sexualization of women"? Yes. This is an old issue and one that I could get on board with until the PTC then argued that the photo shoot establishes the creators' "intentions on the show's direction." Really? That leap in logic is as strained as saying that I want to open a brewery because I drink a beer.

Apparently, recent episodes of the "family friendly" series have put conservative media watchers on edge, including the Madonna episode, the tribute to Britney Spears, and Tuesday's Rocky Horror Picture Show homage. Glee airs early in prime time, when children are supposedly most likely to watch. But honestly, hasn't the PTC or any related organization heard of DVRs, Hulu, or streaming Internet video, all of which make it possible to watch TV at any time of the day? Prime time is nearly a misnomer now, as viewers are no longer chained to the set to watch their favorite shows at an assigned time. Maybe the PTC took him seriously when Glee series creator Ryan Murphy quipped (according to PTC press materials):

"It's tough to get that sexual point of view across on television. Hopefully I have made it possible for somebody on broadcast television to do a rear-entry scene in three years. Maybe that will be my legacy."

Murphy's tongue must have made an enormous dent in his cheek when he said that, don't you think?

Instead of creating dust storms, I wish the PTC would use its resources to tell its followers what it recommends and why. Perhaps the PTC could widen its scope. TV isn't the only means of entertainment. And when something so horrendously offends PTC members, they can do what the rest of us do: turn off the set, put down the magazine, or walk out of the theatre and do something else.

TV Eye
Music for the Masses