How classic horror movies made misfits out of these rockers

There are a lot of us out there this time of year – the monster kids. We've been biding our time, waiting for the dark carnival to arrive in the October country of this near-perfect autumn. Waiting for it to blow chills into the air, accompanied by the crackling susurrations of dead leaves dancing across dusty back roads and the hollow castanet rattle of boneyard creepers. It's going to be a black Sunday indeed, especially if you're hanging around Emo's Downtown.

For the second time in as many years, long-running Misfits tribute outfit Children in Heat is teaming up with horror-movie-influenced, femme-fatale cabaret/performance troupe Dolls From the Crypt (just don't call them "burlesque"; they've got killer smiles and matching blades, and they won't hesitate to unsheathe either) for their annual Halloween night horror-a-go-go.

It's all deep-dark-rooted in a shared, overlapping love of horror movies, Misfits, and the season of the witch.

For Voodoo, a San Diego transplant with Bettie Page bangs, a pale white feline face, and a marrow-deep appreciation of the cinematic art of fear, the skeleton key to the metaphorical ossuary originated in a latchkey youth spent glued to late-night horrorthons – a TV casualty who dug spinal remains. But she's not just Elsa Lanchester and screaming mimis: "I loved The Signal and End of the Line, a really low-budget film that gets it just right and some of the more recent, sort-of horror comedies like Black Sheep and Severance."

As for Children in Heat's resident Danzig (aka former Fabulous Thunderbird/current Flash Boy/Austin icon Nick Curran): "The first Misfits album I owned was Legacy of Brutality, and I'd listen to that every day, all day, until I knew every word. I've always loved the fact that the Misfits were so, like, pop songs and pretty-sounding, but then you'd listen to the lyrics, and it was like ... whoa!"

Granted, it's not just an Austin thing, although it does sometimes seem like every day is Halloween here in Spook City, USA, Danzig's much-maligned feline foray be damned. We dig Mario Bava year-round, we can name-check Ardeth Bay, and we've got Vincent Price's autograph sitting atop our moldering stack of Sixties-era Famous Monsters of Filmlands. We can tell Vampira from Elvira, and we like Vampira better. We don't just sport the Crimson Ghost on our biceps and gear; we've seen it (Republic Pictures, 1946).

"Speaking of Halloween," says Voodoo, "I miss trick-or-treating. Remember when people literally tried to scare the shit out of kids? They don't do that anymore."

"I used to love to go out in the dark and stay out late," adds Curran, unsurprisingly. "When I was 10, I went as Freddy Krueger, and I actually made a glove with knife blades, as real as possible. I used to go all-out."

"That's a good point," notes Voodoo. "Back in the day, you made your own costume, if you were creative and didn't go to Kmart to buy one of the pre-made costumes. And that's the thing that's cool about Halloween. It makes you stay young. Which is the secret to life, really, whether you do it through music or movies or whatever. You've got to embrace the things that most people are scared of because otherwise you're not really living life."

That's, like, 6 feet deep, Voodoo. Kids in the crypt: They're coming to get you, Barbara Steele. 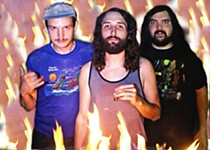