TV Eye: Anarchy in the UK

A British import brings the horror 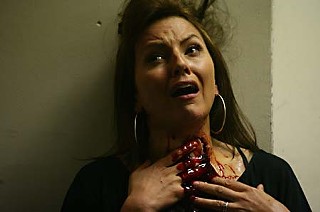 Back in the day, zombies were creepy flesh-eaters that attacked their human prey with the speed of a drippy faucet. Contemporary audiences are much less patient. Zombies now have speed to match their ravenous appetites, as in the newest, perhaps most unique series to hit U.S. television – and just in time for Halloween! – the UK-made Dead Set.

Has there ever been a true horror TV series? There was Dark Shadows, but that was more soapy than horrific. The Addams Family and The Munsters were sitcoms. There have been sci-fi/fantasy dramas, from Lost in Space to Star Trek (in its seemingly endless iterations) and then on to Battlestar Galactica, as well as spookier thrillers like The Night Stalker and The X Files. You could throw in modern favorites like True Blood and The Vampire Diaries, but really, they're all about the love triangles, aren't they?

In this tidy little horror series by The Guardian media critic Charlie Brooker, we find ourselves on the set of Big Brother: UK (the most popular and longest-running reality show on British TV). It's elimination night, an event made even more hectic because the show is broadcasting live. It's bustling backstage. (The ragged camerawork more than drives that point home and makes the process of the viewer getting her bearings more confusing than it needs to be.) Fortunately, the hustle and bustle is somewhat stabilized by the calm perspective of our heroine, a low-level production assistant named Kelly (Jaime Winstone, Boogie Woogie). The Big Brother contestants are also busy preening for the perpetual camera. Being voted out of the house means losing the big prize, but the upside is one-on-one camera time with actual Big Brother: UK host Davina McCall. Outside the Big Brother house, rabid fans have gathered, creating a carnivallike atmosphere. Elimination night means there are plenty of last-minute annoyances to attend to, including catering to the demands of Patrick (Andy Nyman), the obnoxious producer of the series. What everyone, except the viewing audience, is oblivious to in the beginning are the strange events happening outside their insular world. What first looks like civil disobedience by a few soon evolves into full-blown street riots. The turmoil eventually captures the attention of the crew, igniting talk that the show will be aborted. Patrick waves it all off as political nonsense that will be covered during the evening news. His show must go on.

Perhaps because Dead Set is only five episodes long, the series jumps into action at a head-spinning pace. Or maybe it only seems that way because viewers understand what's happening long before the characters do. When the zombies finally infiltrate the set, it's frightening, it's gory, it's full of tension, but it's also deeply, darkly funny. And this is part of the reason that keeps viewers glued to this highly unusual series. A 2009 British Academy of Film and Television Arts award nominee for Best Drama Serial, Dead Set also delights with insider references that horror movie fans will recognize.

As the zombies quickly outnumber the living, Dead Set mimics the reality show that serves as its backdrop by following small groups of survivors as they discover how to maneuver through the apocalyptic meltdown – a true challenge for the actual Big Brother contestants, who had been chosen specifically because of their potential to antagonize one another.

One thing that occasionally kicks you out of the show are the unclear rules of this zombie world. Speedy zombies are now de rigueur. But how and when does a person become a zombie? When they're bitten and "infected"? That sounds familiar. But how come some victims merely die while others are dead and reanimated within minutes? And what's the deal with zombies panicking in small pools of water? Small questions, yes, but enough to make the group I was watching the series with stop the DVD player to discuss. Still, if you're looking for something delightfully ghoulish and spine-tingling, Dead Set delivers. Watch with the lights off ... if you dare.

Dead Set premieres Oct. 25 and continues nightly through Oct. 29 at 11pm on IFC. A marathon of the entire series airs on Halloween night starting at 6:30pm. Check local listings to confirm airtimes.