It's not uncommon for an actor to have two films arrive in theatres – or your local video store – within the same month, but it is rare when a lead actor plays roles as diametrically opposed as those Edward Norton has in the upcoming Stone and Leaves of Grass, which was released on DVD Oct. 12. Even more notable is the fact that, in Tim Black Nelson's Leaves of Grass, Norton plays identical twins, one a laid-back (way laid-back) Oklahoma pot entrepreneur named Brady and the other an uptight classics professor at Brown University. Add to this Norton's forthcoming turn in Stone, in which he plays a feverishly complex inmate and long-ago murderer attempting to win his parole via a dangerously off-kilter Robert De Niro, and it's safe to say that the Oscar-nominated Norton has covered all his actorly bases for the next year or three.

The Austin Chronicle sat down with Norton during his recent stopover in Austin for Stone's regional premiere at Fantastic Fest.

AC: Both Stone and Leaves of Grass are perfect examples of the transformative powers of filmmaking. You couldn't pick three more dissimilar characters, and yet you fully inhabit all of them to a depth that is, frankly, remarkable.

EN: I found my way pretty quickly with getting a vibe on [Leaves of Grass'] Brady. With Stone it was the complete opposite. Five days before shooting, I really felt at a loss. It was probably the closest I've ever been to rolling on a film and going home at night with this creeping sensation that I am not there yet.

AC: How did you resolve that? What was the key to playing Stone?

EN: I was meeting prisoners at this prison in Jackson, Michigan, and I met the guy who started the Crips gang in Detroit. He gave me some really great verbiage that made its way into the film, but more importantly he introduced me to another inmate, who, as soon as he walked through the cell block door, I knew that he was the key, for me, to figuring out the character of Stone.

EN: He had literally the exact quality that Stone has in that first scene. It was this intense sensation of agitation coming from a person who was very focused on [his] need to be out of this environment. He had this really strange, sandpapery voice, and he had a spiritual matrix that was cobbled together from just bits and pieces of all these things. He had a jittery, intense energy, and yet when he spoke of how his life had changed, he seemed so earnest and real. I brought [director John Curran] to meet him, and when we left John said, "If you can get 50 percent of that, we're golden." And there are so many gems in the film that came about as a direct result of my conversations with this inmate. Every other line in the film came from that. You just can't make that stuff up, and that changed everything for me. I got it, and I remember being really psyched once that happened. You know, those reference points, they're like cars: Once you've got it, you can get in it and just drive. 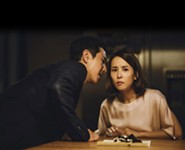 The Movie Bug
Touching down at the Toronto International Film Festival