Anne Helen Petersen takes her readers beyond the blind item 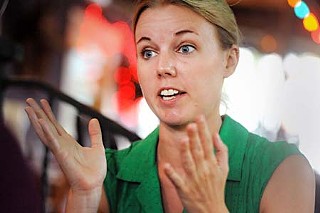 Back in the 1920s, journalist Walter Winchell invented the gossip column while at The New York Evening Graphic, peppering his work with references to celebrities' abortions, unsavory friendships with gangsters, illegitimate children, and rifts in romantic or marital relationships. His ability to harness the power of the media enabled him to break down the walls between the common man and the rich, famous, and powerful; according to Winchell's biographer, Neal Gabler, celebrity gossip is about the empowerment of outsiders and a leveling of the playing field.

But as the decades passed, the nature of celebrity gossip shifted. During Hollywood's golden age (the late Twenties to the late Fifties), gossip columnists and bitter rivals Hedda Hopper and Louella Parsons helped the studios perpetuate the constructed images of stars like Greta Garbo and Cary Grant and earned the ire of celebrities who failed to appreciate being the subjects of the dreaded blind item. (Spencer Tracy notoriously kicked Hopper in the hiney after she published something about the leading man and longtime lady love Katharine Hepburn.)

The McCarthy era saw professional gossips beginning to specialize in stars' transgressive behaviors (think here of Danny DeVito's gossip columnist in L.A. Confidential, who had the dirt on who was gay, etc.) and spawned magazines like Confidential, which departed from the old-school fan magazines and focused entirely on sleaze. The tenor of the times was all about dragging the famous kicking and screaming into the spotlight over alleged homosexuality, pedophilia, or Communism.

Which brings us to contemporary gossip. The longstanding Page Six is a marriage of old-school celebrity worship, dirt-dishing, and salacious schadenfreude, whereas TMZ.com takes voyeurism to new, uncomfortable lows (the live footage of Heath Ledger's corpse being wheeled on a gurney from his apartment building into an ambulance was particularly galling). There is DListed.com, catty and callous with its "Hot Slut of the Day" feature. And, of course, no discussion of mainstream celebrity gossip blogs is complete without a mention of the odious PerezHilton.com, which traffics in bitchy, childish takedowns of enemies and painfully transparent attempts to snuggle up to objects of admiration.

So what is the thinking consumer of celebrity gossip to do when she finds the choices before her simply too distasteful and shallow to consider? Enter Anne Helen Petersen, a doctoral candidate in Radio-Television-Film at the University of Texas and author of AnneHelenPetersen.com, better known as Celebrity Gossip, Academic Style. In it, Petersen shares the fruits of her research on the history of celebrity gossip from 1948 to the present, with a smidgen of commentary on contemporary cultural products (Glee, Mad Men) on the side.

The more academic pages of Petersen's blog construct a matrix that harnesses the discourses of cultural studies, feminism, domesticity, postmodernism, and globalization. One recent post argues the parallels between Michael Cera's star persona and that of Buster Keaton's. Another situates Emma Stone (lately of Easy A) along the spectrum of "It Girls" that spans from Clara Bow to Rita Hayworth to Julia Roberts. Petersen's blog is both a dissertation-process blog that is simultaneously inspiring and encouraging for identification-seeking academics, as well as a whip-smart treasure trove of pop-culture commentary ("What Is a Justin Bieber?") for gossip hounds who simply cannot stomach another rumor about John Travolta's alleged dude-kissing ways, Jennifer Aniston's perpetual bump-watch, or Lady Gaga's penis.

"I wanted to do something more historical because I think that a lot of the contemporary sighs and moans about celebrity culture lack a lot of history and don't take into account that this is a culmination of many, many things that came before," explains Petersen. "All the way back to the 'Teens and Twenties, people were saying that people only care about scandal and celebrity and dirty things. Because it's so cyclical and there's that lack of historicism is part of why I wanted to do this, both with my blog and my dissertation."

Petersen's methodology is informed by Richard Dyer and star studies, the subgenre of cultural studies he spawned with his 1979 book, Stars. In it, he argues that stars are constructed images to be consumed and that we make meaning out of the way that we consume them. "The thing with stardom and celebrities," says Petersen, "is that we don't know who they really are. The only thing we know is their image. Whether Michael Cera – the real person goes to sleep at night and eats cereal – is actually a dick, we don't know. All we know is what gets mediated about him. So the fact that it was reported that he was a dick to Joseph Gordon-Levitt [at Sundance in 2009] or refused to do the Arrested Development movie, maybe there's some other industrial reason why he can't or won't do it. All we know is that it looks like he's refusing to do it; it looks like he's an asshole. That sort of thing is really interesting to me."

So, why consume gossip? Petersen has some compelling ideas about what the study of celebrity gossip can tell us about ourselves as a culture. "It is a way for us to talk about or to fight about things that are challenging in a particular cultural moment. Gossip allows us to say the unsayable, to talk about things that we're not otherwise comfortable talking about. Like, is homosexuality OK? Instead, you say, 'Am I OK with the fact that Ellen [DeGeneres] is gay?'"

Petersen goes on to explain that star images not only encapsulate ideological ruptures, like the virgin/whore dichotomy represented in the figure of Marilyn Monroe, but they also cover that rupture and divest us of the need to talk about it. Take, for example, the wedding of Ellen DeGeneres and Portia di Rossi, which scored the cover of People magazine. "Part of the critique of Ellen is that she is so heteronormative in her gayness," says Petersen. "When they got married, [DeGeneres] wore a very nice tailored white suit and [di Rossi] wore a very beautiful huge cupcake dress, aping the signifiers of traditional marriage. I think that for a lot of people who are otherwise not OK with gay marriage – because to them gay marriage is ugly, it is different or weird – this is a way of putting a wedge in there that keeps the door open.

"Even though some may say [that to have a gay wedding that co-opts the signifiers of traditional marriage] is heteronormative or not progressive, it's still opening that wedge to have that depicted on People magazine, which is the most conservative of the fan magazines out there," says Petersen. Because DeGeneres had long been out publicly as a lesbian and had won the hearts and minds of the soccer-mom set, the sight of her gay wedding on the cover of a fan magazine both reveals and covers the cultural rupture that is the issue of gay marriage.

Of course, celebrity gossip isn't all rainbows and progress. "It's also a means of social policing; it can be repressive, especially with bodies," Petersen asserts. "Gossip that is focused on women's bodies is a way of saying: 'Her body is not what we say a body should be. She's too fat, or she's too thin.' Both of these are extremes, and by gossiping about that body, we close in on what is normal." So while the female reader may identify on one level with features that crow "Stars! They're just like us," seeking validation that even famously beautiful women are not immune to cellulite, food babies, and spotty faces, those same features may very well inform a deeper-seated self-loathing. Madame Bovary, c'est moi, and all that.

Ultimately, if celebrity gossip is the great equalizer between the rich and famous and the commoners, then Petersen and her blog are the agents of egalitarianism for the gossip consumer and the business of gossip. Petersen pulls back the curtain on the gossip industry by making historical and contextual connections that aren't always intuitive but are consistently insightful. To understand the way we make meaning out of consuming star images is to better understand the zeitgeist. But don't expect cool academic objectivity from Petersen, who is both a feminist and an avid consumer of the Twilight franchise, when it comes to a certain celebrity couple that is frequently the topic of gossip.

"I love Brangelina. I'm endlessly fascinated by them," she gushes, a bit sheepish. "Part of it is that I buy them, things that they say; I really am a fan. Part of why I admire them is because they play the game so well." 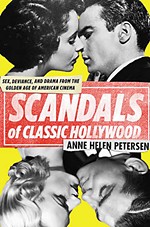