It's a Wrap: A Life in Front of Dad's Camera 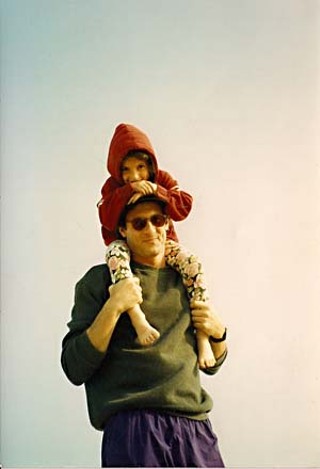 Baby boomers who experienced huge chunks of their kids' lives while squinting through a viewfinder will certainly grok Doug Block's latest film, The Kids Grow Up. Obviously for a filmmaker, the imperative to capture – forever – the evanescent adorableness of one's own flesh and blood can be irresistible, and Block found himself with 17 years of footage of his supremely articulate, self-possessed, and photogenic only child, Lucy, with much of it annotated with an ongoing conversation between the two of them, as the camera ran. Predictably, as the years went by, Lucy's enthusiasm for being in front of Dad's lens waxed and waned, though she remained mostly a good sport to the end.

The film came about when Block found himself increasingly gloomy over the prospect of Lucy's leaving home for college. She would not only be literally moving out of the frame; he also dreaded the inevitable changes in their relationship. So, much as in his last film, 51 Birch Street (2005), in which he worked through unexpected revelations about his parents and their marriage, Block decided to deal with his sense of impending parental doom by filming Lucy's last year at home while, at the same time, seeking succor and enlightenment from those close to him, like his hyperrational, unflappable wife, Marjorie; his sisters; and his aging father, whose removed, aloof, old-school style of parenting was touched on in 51 Birch Street and, subsequently, acknowledged and renounced by Dad himself.

The nondefensive, self-questioning candor of Block's voiceover narration is pitch-perfect and frequently comic. He can barely – and hardly tries to – conceal his annoyance with the annual five-week-long visits of Roman, the non-English-speaking boyfriend Lucy met during a year in France. And we can't help but pick up on some provocative exchanges between Block and Marjorie. (Fodder for Block's upcoming film on marriage?) But this film is about Lucy and her dad, a point adeptly made by repeated cross-cuts of scenes of young Lucy with the latter-day one. It shows us that while Dad knows how well she's turned out, he'd give anything to be able to hit "rewind." Making this film is the best he can do.

Austin Chronicle: So how did Lucy feel about the finished film?

Doug Block: Mixed feelings. On the one hand, she thinks it's a really good film, and she's a tough critic. But she's a pretty normal kid with no desire to be the center of attention and certainly no desire to be famous on any level. And there's one scene in particular that still embarrasses her.Unfortunately, it's the one that always gets the biggest laughs from the audience – though they're not directed at her.

I think it's helped a lot for her to be three years removed from the filming and to have gained some perspective from being older. She saw it at Silverdocs this past June for the first time with an audience and seemed fine with it.At the Q&A afterwards, she said she knows she'll appreciate having this document of her family and childhood even more as she gets older.Which was a huge relief for me to hear, of course.

AC: And your wife, Marjorie?

DB: Marjorie was bemused, as she usually is, by being fodder for my art or grist for my mill, or whatever you'd call being taped at odd moments by your husband on his digital camcorder only to know it will eventually be shown publicly, on big screens and small, all over the world.Since this is the third film of mine that she's been featured in, she clearly trusts that I'll present her ina flatteringlight.Which, I have to say,doesn't take much work on my end. I'm always blown away by how honest and emotionally present she is when I point the camera at her.

But with The Kids, I think I've ruined her. She comes across way too well in it. After every screening the unanimous reaction has been: "Your daughter is so beautiful, and your wife is so wise, so amazing."She jokes that I've blown it for myself for affairs and calls the film my ball and chain.What can I say? It's the first rule of personal documentary filmmaking: Make your wife look really good.Especially if she earns more money than you do.

AC: Did either of them have veto rights?

DB: Both Marjorie and Lucyhad the right to not only veto footage but veto the project. I was neverconcerned that Marjorie would do that, but it was disconcerting to give Lucy that power. On the other hand, there's no way I would force Lucy to let me release a film that she thought might impact her life negatively. So just before I set out to raisesome serious money to finish the film, I showed her about 30 minutes of representative scenes, including all the toughest ones, and said, "Now's the time to let me know one way or the other."Luckily, she gave it a thumbs up and signed her release form. Next to her signature, I should add, she drew a picture of a pile of poop and wrote, "This is what I think of your film."

AC:Can you talk about the challenges of bifurcating your roles – on the one hand, as a dad and husband, on the other, as a docmaker – particularly during the more revelatory, emotional scenes which as a filmmaker you might have been ecstatic about ... if you hadn't also been a blood relative? Did you pull any punches that you might not have otherwise?

DB: This question certainly goes to the heart of the difficulty of making personal documentaries, especially when the filmmaker is the one holding the camera. This is where my 30 years of professional experience as a cameraman is invaluable.

I can shoot pretty decently without having to think about it, which means I can listen closely and be "in the moment" in terms of engaging with my subjects.While shooting, I try not to think too much about how things will play out in the finished film, though I certainly can get a feel for it.

As far as filming Lucy went, I did my best to navigate my sometimes competing roles as both father and filmmaker. Butthe bottom line was always that I'm a father first.So any time Lucy didn't want me to film, I didn't.If she let me film but then asked me to stop, I'd stop.Particularly in the weeks leading up to her departure for college, when Lucy was feeling particularly stressed, I did my very best to shoot only what I absolutely needed to get.So, I have to admit, it got me pretty stressed, too.

In addition to my roles as filmmaker and dad, I had a third role, as well – husband.And as hard as some of the scenes were to shoot with Lucy when she was emotional or angry, nothing came close in degree of difficulty as shootingMarjorie in bed during her episode of depression. Even though I only shot for a few minutes, pointing a camera at her in that conditionwas the toughest thing I've ever had to do in my professional life.The only way I could do it was knowing that destigmatizing depression is such a mission for her.And that, of course, she would later have the right to see the scene first and have it cut out, no questions asked, if she wanted.Happily, she's very proud of the film and eager to have mainstream audiences see a story that's not at all about depression, but where one of the characters becomes clinically depressed and then recovers beautifully without making a big deal of it. It's a powerful message to get out there, and all the more effective because it's not a message movie.

AC: And, in the end, what have you concluded about the experience of sending your one and only off to college?

DB: It's not like Lucy died, but having your child leave home – and especially your only child – is a kind of mini death.It's the death of the family unit as we knew it and lived it every day for 18 years.Life moves on, and Lucy and I have a great adult relationship now that I treasure, but it was a very difficult adjustment period and shouldn't be underestimated.

AFS Documentary Tour presents The Kids Grow Up on Wednesday, Oct. 13, 7pm at the Alamo Drafthouse at the Ritz (320 E. Sixth) with filmmaker Doug Block in attendance. Tickets are $6, general admission; $4, AFS members and students with ID.