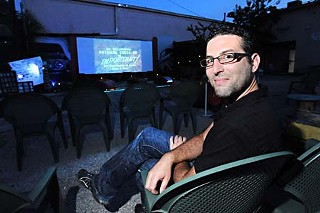 – The Statler Brothers, from the 1976 film Drive-In

Despite that fact that here in Austin we, the cinematically chosen, have a veritably endless 24-frames-per-second smorgasbord of movie mayhem and filmic wonders unspooling around us virtually year-round, there is one key element of this movie-mad town that's been missing for far too long: We have no proper drive-in theatre. Back at their peak in the 1950s, some 400 drive-ins could be found in the Lone Star State, but the advent of the multiscreen cineplex, the birth of VHS, and endless urban sprawl combined to effectively knock these glorious open-air theatres of rebel youth out of the running.

Today, there are a handful of drive-ins operating between Austin and Houston, Austin and Dallas, Lubbock and Amarillo, but when all's said and done, the stars at night are slightly less big and nowhere near as bright as they used to be, deep in this heart of Austin.

Tucked away behind an unassuming frontage just one block east of Juan in a Million, Frank's cultural hub combines Austin's holy trinity – art, food, and film – in a way that's never really been done before, but judging from the sellout crowds Starving Art and the Blue Starlite have been attracting since its opening/expansion two months back, it's an idea whose time has clearly arrived.

"When I was offered this lot eight months ago," explained Frank, "I knew I wanted to put in a trailer park eatery that had something to do with art. The idea was culture and food. [Eventually] it struck me that I could fill the adjoining building with artists and put galleries in there. And then, because we have a huge back lot attached, the idea of a mini drive-in just seemed natural."

Blue Starlite isn't even a quarter of the size of the Alamo Drafthouse's mammoth inflatable outdoor screen – and at the time of this writing, there's only room for 12 carloads – but what it lacks in size it makes up for in retro aesthetics and genius programming. Frank scoured eBay for actual car-speaker posts from the drive-in's golden era, painted a screen on an adjoining wall, added a phalanx of folding chairs up front, and is in the process of restoring a permanently dry-docked runabout for use as a concession stand. (Not that that's completely necessary, seeing as how trailer court concessionaires Along Came a Slider, Iggi's Texatarian, Phoebe's Mud, and Old School BBQ are already on site and feeding the slavering masses.)

But why a mini drive-in in the middle of a residential area? Why not? This is Austin, after all, and, taking a cue from San Francisco-based mobile drive-in DIYers MobMov.org, Frank has programmed a list of upcoming feature attractions that'd make any Byron Orlok (that'd be Boris Karloff's character in Peter Bogdanovich's drive-in-centric Targets) howl at the moon. Recent entries include sold-out screenings of Paul Wegener's silent classic The Golem (featuring an original score from the Pixies' Black Francis), a kiddie-mobbed Star Wars (under the stars, natch), and a monthly slate of archetypal drive-in spook shows from the incomparable American International Pictures and king of the B's Roger Corman.

"Ultimately," says Frank, "[Starving Art and the Blue Starlite] came out of the fact that, as a writer, [I] spend a lot of my time on my computer or locked away or in a cafe with headphones on, sort of disconnected. This is my way of becoming more involved with the community and creating something that's never been attempted before, kind of my own little cultural chemistry set."

The drive-in dead? Not even. To paraphrase Colin Clive's Victor Frankenstein: "It's alive!"

Starving Art and the Blue Starlite's schedule and reservations can be found at www.austinstarvingart.com. 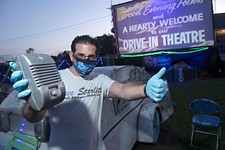 There Is a Light That Will Never Go Out at Austin's Drive-In Theatres
Theatres may be shuttered, but the in-car cinema experience still shines bright