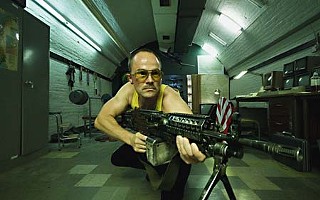 Velkommen, filmmakers of Norway! This year's spotlight nation at Fantastic Fest may not have the cinematic cachet of some of its Scandinavian neighbors (hey, Sweden, not everyone gets an Ingmar Bergman), but if you think its contribution to film ends with subbing for Hoth on The Empire Strikes Back and providing moose jokes for Monty Python and the Holy Grail, it's time to reconsider the icy nation's cultural possibilities.

Of course, smart genre-watchers have anticipated a mini-invasion coming for a while. Some point to 2006's Cold Prey (Fritt Vilt) as the breakthrough Norwegian horror, adding the frigid terror of the Jotunheim mountains to the serial killer genre. Other gorehounds give the bloody nod to Dead Snow (Død Snø), 2009's contender for best Nazi zombie comedy-horror. Both films prove that Norwegians are among Europe's toughest bastards (few films contain so much auto-surgery), but there's also a display of the nation's dry and earthy humor. As one soon-to-be-victim in Dead Snow comments, all the good jokes involve pee, poop, and semen, and while Fatso is short on the pee and poop, well, it makes up for it with what's behind door No. 3. Pumping some new blood into the limp schtick of the sex comedy, the film belongs to Nils Jørgen Kaalstad. As schlubby, painfully shy protagonist Rino, his simple life of drawing comics and compulsively masturbating is interrupted when his father imposes new roommate Malin (the elfin Josefin Ljungman) on him. There's something of the young John Candy about Kaalstad – the constant twitching, the discomfort in his own skin, all offset by a warmhearted charm – that sticks with the audience long after the Fleshlight gags have been rinsed away.

More familiar to American audiences will be the reigning king of Scandinavian cinema, Swedish-born Stellan Skarsgård, reunited with director and longtime collaborator Hans Petter Moland for A Somewhat Gentle Man (En ganske snill mann). However, this is a long way from their previous work together on either 2000's intense family drama Aberdeen or 1995's blood-flecked frontier drama Zero Kelvin. The recently translated trailer indicates a dark gangster comedy, with Skarsgård as a paroled hit man for the Norwegian mob.

Don't look for even a trace of social realism in Norwegian Ninja (Kommandør Treholt & ninjatroppen). Adapting his 2006 satirical novel Ninjateknikk II: Usynlighet i Strid 1978, Thomas Cappelen Malling's directorial debut looks like a simple spoof on old grindhouse-friendly martial arts flicks (with added fjords). Dig a little deeper and it's a snow-covered, spin-kicking answer to Confessions of a Dangerous Mind, a berserk fictionalized rewriting of the true story of convicted Soviet spy Arne Treholt. How true? It's unlikely that Norwegian diplomats ever shot lightning from their hands. Although that could just be another thing you don't know about Norway.