Behind Bars, But Bucking the System

Inmates find redemption in the doc 'Sweethearts of the Prison Rodeo' Growing up in suburban Oklahoma, Sweethearts of the Prison Rodeo director Bradley Beesley had never been incarcerated or straddled a bucking bronco. "So the fact that I've made a prison rodeo movie is quite a surprise," he said.

In 2006, on a whim, Beesley headed east from San Francisco with a camera to catch some footage of the annual Oklahoma State Prison Rodeo, where inmates with minimal training risk life and limb against rampaging livestock for a paying audience. As a child, Beesley read about it in the local papers. "It was always this mystical, gladiator-type event." By luck, he attended the first time in the event's then 66-year history that women were allowed to compete. After showing his initial footage as a documentary short at South by Southwest in 2007, he returned to capture the inmates' struggles as they prepared for the next year's event. 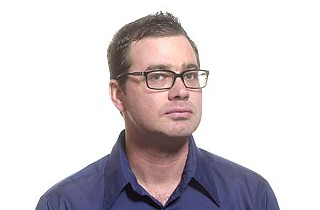 Austin-based filmmaker Bradley Beesley returned to his native Oklahoma to shoot Sweethearts of the Prison Rodeo. (Photo by John Anderson)

Access to the prisons wasn't too much of an issue (it helped, he admitted, that the head of the Oklahoma Department of Corrections was a fan of his 2001 film, Okie Noodling, about the arcane hobby of bare-handed catfish hunting). However, Beesley quickly had his presumptions about life behind bars and in the saddle overturned. He said, "After I saw Stir Crazy, the Gene Wilder film with Richard Pryor where they escape from the prison via the prison rodeo, I just assumed that the only reason you would be in it was to try and escape." If the inmates were looking for some form of escape, it was less literal than what he'd expected. Oklahoma holds the nation's dubious honor of having the greatest number of incarcerated women per capita, many for minor drug charges. Apart from one woman, he said, "all 12 other inmates featured on the team were in for meth – dealing, cooking, doing, living with a guy that's dealing, cooking, doing." Beesley quickly realized that the bonding experience of the practice sessions was what really attracted the women. He said: "If it was skydiving, I think they'd be into that. Just anything to break up the monotony of prison life."

While the documentary concentrates on the female inmates, one male prisoner is featured throughout: Danny Liles, a 14-year veteran of the rodeo serving a life sentence for his role in a murder. Beesley dubbed him "the Morgan Freeman character, the old wise sage on the yard who could chime in for us so we didn't have to use a voiceover." Like the female inmates, Liles was eager to be part of the film. Beesley said: "He enjoyed speaking to us about photography, art, philosophy. More than anything he was eager to speak to anyone who wasn't 'the man.'"

The big payoff for Beesley and the inmates was the trip to the arena at the Oklahoma State Penitentiary for the rodeo itself. "I enjoyed getting down there in the chutes," Beesley said. "You're almost shaking because it's so intense and you're scared for this person that you've been following around for the last two years." With gorings and stompings caught on camera, there's little doubt about how dangerous messing with a few thousand pounds of charging bull can be. Not that the prisons were always safer: During one day of shooting, Beesley said, "One of the guys we featured in the 2006 rodeo bit another guy's ear off. At that point, they said, 'Eh, time to leave,' and we were like, 'Yeah, I think so.'"

Beesley and his crew have since returned to those prisons, including the women's team's home at the Dr. Eddie Warrior Correctional Center, for special screenings. He said: "We had 700 women out there in the yard. They loved it; they cheered. It was total Johnny Cash-style." After the Oklahoma Department of Corrections saw how he handled working behind bars, he said, "They've invited me and my crew to make a film about mental health in prison." However, one person isn't totally happy. While he loves the film, Beesley said, "Danny told me that he's still pissed off because of the name 'Sweetheart.'"

Sweethearts of the Prison Rodeo screens at the Alamo Drafthouse South, Sept. 17-23 and will be released on DVD Oct. 25.