Texas Preps for Its Close-up 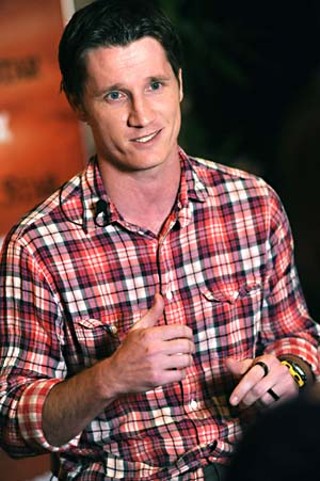 If you think Texas has been appearing on network television a little more than usual lately, you would be correct. As Friday Night Lights (NBC) and The Good Guys (Fox) go on hiatus, two new series come to the fore, joining the small but memorable ranks of TV series that have some aspect of Texas in their loglines – be it setting, character, or some intangible aspect of what it means to be Texan. This fall TV season, all eyes are on My Generation (ABC) and Lone Star (Fox), two radically different series set deep in the heart of Texas.

Local interest is focused on My Generation, which was created by Austin transplant Noah Hawley (The Unusuals). Based in Austin, it follows a group of childhood friends 10 years after their high school graduation. Or, as TV Guide's Matt Roush tweeted of the premise Aug. 1: "MyGeneration is mock-documentary sequel to a high-school docu that never aired. Take a cue, ABC, and keep this on the shelf." Ouch! But seriously, those words may reflect Roush's age more than the potential success of the series.

Filmed in and around Austin, the show includes glimpses of the city, with small amusements found in the fictional high school that serves as the kids' alma mater (Greenbelt High). However, if there is anything intrinsically Austin in this series, it was not evident in the pilot episode, screened for a small but enthusiastic audience at the Paramount Theatre in mid-August. But does it have enough oomph to be noticed beyond Austin – and especially in the thick of premiere week? Final verdict: Being set in Austin doesn't help or hurt this prime-time soap. Not as sly with the documentary format as The Office or even Modern Family, and certainly not as annoyingly filmic as the film Cloverleaf, this new series has baby teeth that could have some bite with time.

When it comes to buzz around drama series, Lone Star may be the winner. With an ambitious premise, strong writing (by Austin-based writer Kyle Killen), and a powerful cast (including Friday Night Lights alum Adrianne Palicki, David Keith, and Jon Voight), this series about powerful Texans rips a page from the Dallas playbook and (thankfully) dignifies it.

Lone Star features a clever and charismatic con artist (played by James Wolk) who is leading a double life in Houston and Midland. In Houston, Bob Allen (Wolk) is the devoted husband to Cat Thatcher (Palicki), the daughter of a powerful Texas oil tycoon (Voight). Bob has garnered the favor of his flinty father-in-law, much to the annoyance of his brothers-in-law. As it becomes clear that Bob may be the heir apparent to the family empire, the brothers begin to seek ways to upend him. The easiest way would be to reveal his other life as Robert Allen in Midland, where he keeps house with Lindsay Holloway (Eloise Mumford). The draw is to see how long Bob/Robert can keep up the scam.

Does Lone Star capture the Texas imaginary? Yes, in the same way Friday Night Lights is about so much more than football.

"Bob desperately wants to turn a corner," Killen said at an interview following a public screening of Lone Star in August. While Bob/Robert may have initially been driven by greed, the pilot reveals his desire to please not one, but two father figures: the con artist who taught him everything he knows (Keith) and the oil baron who has seen his potential and welcomed him into his family. And the women in his life? Bob says he loves them both.

"I'm okay with characters who do wrong if their trajectory shows they're aiming for something higher," Killen said, referencing Breaking Bad's Walter White, when speaking of Bob. Final verdict: J.R. Ewing may not appreciate Bob's ultimate motives, but with two beautiful women and enough money (at the moment) to keep the worlds from colliding, he would sure enjoy the ride. Viewers will too.