Nine years after Robert Rodriguez first tagged Danny Trejo with the Machete moniker in Spy Kids and three years since the actual character made his outlandishly kickass debut in a Grindhouse faux film trailer, Machete – about a Mexican federale-turned-vendetta-happy avenger – is finally arriving to blow minds and burn down theatres for real. Co-directed with longtime Troublemaker editor Ethan Maniquis, Rodriguez's incendiary nod to his self-created "Mexploitation" genre is bristling with blacker-than-hell gallows humor (check out that gutsy "red band" rated-R trailer!), enough edged weaponry to restage the conquistadors' entire bloody history, and, yep, Robert De Niro as the senator. You'll want to bring a pair of spare eyeballs with you because chances are the ones you're using now are going to explode. (In a good way, that is.)

We spoke to Rodriguez while he was in Los Angeles working on the fourth Spy Kids installment and learned the secret of reverse engineering an ethnicsploitation film that 42nd Street would be proud to call itsown, if only 42nd Street were still around. ¡Viva Machete!

Robert Rodriguez: I came up with the Machete character back around Desperado, and I told Danny back then the idea of following up that film with other Latin-themed action movies. The character was supposed to be a Mexican federale who was uncorruptible and who would go up against the drug cartels, have his family killed, and then hide out in the U.S. as a day laborer. That was always the story. Danny and I talked about that for years, but we never got it going, and so five years later, when I was doing Spy Kids, I decided to code-name Danny's character "Machete" as a nod to this project we couldn't get off the ground.

AC: And then the fake trailers in Grindhouse resparked the idea?

RR: Yeah, mainly because it worked really well in that Grindhouse fashion. Actually, the movie is based more on the trailer than it is on the original story. If you look at the original Grindhouse trailer, it looks like there could be a normal movie under there somewhere, a movie that was just being sold in an exploitation-movie way. But of course I wanted Machete the movie to live up to Machete the trailer, so the finished movie is pretty wacky. It's way out there, you know? He does get all the women, and he does kill all the bad guys. Everything you see in the trailer is in the movie. It delivers the goods, which is actually great, because usually it's the reverse: The trailer is usually much better than the film.

AC: Did you have any trouble matching up the Grindhouse trailer shots with the new footage? I'm thinking the skyline has changed considerably in the five years since you shot the original trailer in Downtown Austin ....

RR: Not really. We managed to include every shot that's in the trailer. Literally every shot, so that you see the build up to that shot, the shot itself, and then the movie goes on. We tried to match continuity as much as possible, but the main thing was to include all those shots. It was a pretty fun way of reverse-engineering a movie.

AC: How did Robert De Niro get involved in the project?

RR: He had heard from [George] Clooney that working in Austin, with me, had been a good experience and [De Niro] should check it out sometime. He was actually on the From Dusk Till Dawn set on the day that Salma [Hayek] did the snake dance, which was my birthday, so I'd met him way back then. When I was breaking down the trailer, I thought that one of the characters that could've been played bigger was the senator character, so during casting I said, "Let's just start at the top, with De Niro, and then when he says no we'll go to the next person down the line." But he loved the trailer, he loved the irony of the character, and he went for it. Plus, he'd worked with Danny before. He put a bullet in his head in Heat.

AC: You're sharing directorial credits on Machete with Ethan Maniquis. How and why did that come about?

RR: Ethan's been working with me since Desperado, and, at the time, I was doing a lot of producing – Predators and this other movie I had going, Nerveracker – and wasn't sure how much time I'd have to put into Machete. He was my original choice to do the movie, which we had to do because so many people came up to me after Grindhouse to ask if I was really going to do it, even more people than asked if I was going to do Sin City 2. Ethan was one of the project's biggest cheerleaders. He'd keep bringing me ideas, and I'd say we didn't have time to do it, but, you know, it got to the point where we had to make it, in any way, shape, or form, even if that meant going straight to DVD. As soon as I rewrote the script and it began attracting these bigger actors, we realized it was definitely going to be a theatrical movie. Now people can start asking me about something else. 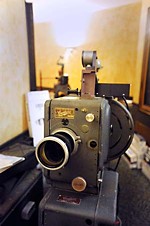 What's the Rumpus, and Where Can You Find It?
A peek at our upcoming coverage of aGLIFF and Machete