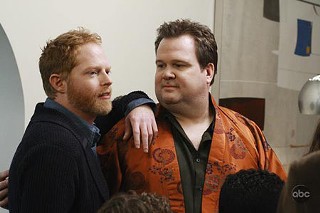 Modern Family is TV Eye's pick to win for Outstanding Writing for a Comedy Series.

The Emmy Awards will be handed out on Aug. 29. As always, I ponder the writing nominations, first and foremost.

It's always a good sign when a series has two or more nominations in a category, as with 30 Rock. Of its two nominations, I would give the Emmy to the "Anna Howard Shaw Day" episode penned by Hubbard just for the wacky dream sequence at the end when Liz Lemon (Fey), still high on pain meds (after having oral surgery), hallucinates that all of her past lovers are Jamaican nurses gathered in a doctor's office. But the "Niagara" episode of The Office is endearing and funny, half of the doubleheader that was the Pam and Jim wedding. Glee is red-hot right now, but I think when it comes right down to it, I would give it to Modern Family. Refreshing, funny, and sometimes snarky, this freshman series always pleases and is often surprising. The pilot episode is nominated, and it was a great start to a solid season for this ABC comedy.

Interesting omissions: No love for Community (NBC)? I admit it took me a while to warm up to this series, but I'm on board now. The Middle (ABC) is consistently funny and underappreciated, as is the off-kilter Bored to Death (HBO). I wish the Emmy folk would create new categories to reflect television beyond broad fiction and nonfiction categories. No one ever knows where or how to celebrate dramedies like Nurse Jackie (Showtime) or Weeds (Showtime) or genre fare like Eureka (Syfy) (a charming sci-fi comedy) or the more serious Caprica (Syfy). That day will probably not come until it's realized by the official governing body for the Emmys (the Academy of Television Arts & Sciences) that "television" as the Academy defines it has become something else.

Outstanding Writing for a Drama Series: Two episodes of Mad Men (AMC) have been nominated, recognizing three of the series' writers, including series creator Matthew Weiner, Robin Veith, and Erin Levy. Other nominees include Michelle King and Robert King for the pilot episode of The Good Wife (CBS), Rolin Jones for Friday Night Lights (DirecTV), and Damon Lindelof and Carlton Cuse for the final episode of Lost (ABC).

Well, of course I have to root for the hometown favorite Friday Night Lights, but it's up against some stiff competition in Mad Men and the final episode of the inexplicably revered Lost. The dark horse in this pack is The Good Wife. Essentially another law drama, it rises above the same-old, same-old, in part because of the touching performance by lead actress Julianna Margulies. But the other reason this series shines is because of its overarching theme – a weekly meditation on the idea of justice distilled through the eyes of Margulies' Alicia Florrick. As a woman publicly embarrassed by her philandering husband, she now struggles to make a name for herself beyond the "wronged woman" badge she is now forced to wear, witnessing or participating in situations that exemplify the adage that the right thing to do is not always the thing that feels most right.

I usually don't care about nominations in the Outstanding Writing for Nonfiction Programming, but this year the esteemed food writer Anthony Bourdain is among the nominees for his series, Anthony Bourdain: No Reservations, on the Travel Channel. He is the clear winner in my mind. I also don't pay much attention to the Outstanding Writing for a Variety, Music or Comedy Special, but among the typical award-show nominees is Wanda Sykes for her brilliant comedy special, I'ma Be Me, which aired on HBO. I've watched it at least a half a dozen times. It's that funny – far funnier than her hit-and-miss late-night talk show that aired on Fox.

Next week, a look at the Emmy-nominated series.