Can We Have Your Attention? 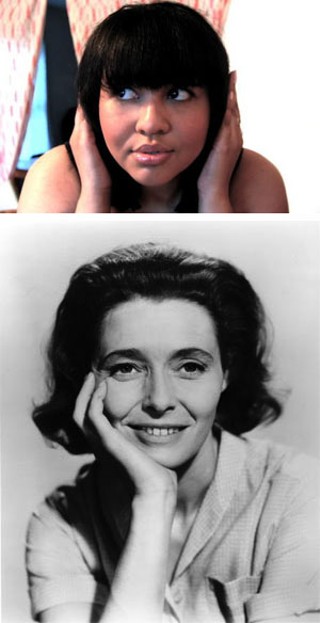 The span from short attention to long: MTV anointed Gabi Gregg its first-ever Twitter jockey the day after Patricia Neal – an actress who demanded patience and close attention – died at the age of 84.

Maybe small things easily fascinate me, but once again I found myself intrigued by two seemingly unrelated things occurring at once. The first was the death of actress Patricia Neal. The second was the announcement a day later that MTV had hired its first TJ – that's Twitter jockey, for those of you who know who Patricia Neal is and think "twittering" is something you will do around the house once you retire.

Passing on Sunday at the age of 84, Neal had a long and turbulent life both on and off the screen. She appeared or starred in many classics of the U.S. cinema: Hud (for which she won an Academy Award in 1964), Breakfast at Tiffany's, A Face in the Crowd, and The Fountainhead are only a few titles from her impressive filmography. But I was first introduced to her in the 1971 made-for-TV movie The Homecoming: A Christmas Story. This precursor to the TV series The Waltons is a lost treasure, one of the few TV movies that actually had some weight. Neal played Olivia Walton, the matriarch of the Walton family (Michael Learned would play the role in the TV series). The story was simple: Set during the Depression, a woman and her brood await the return of her husband (Andrew Duggan) on Christmas Eve. He's left them to seek work, and everyone is looking forward to a holiday reunion. But when news of bad weather and a bus crash with several fatalities arrives through the radio, their only means of communication with the outside world, Olivia and her eldest son, John-Boy (Richard Thomas), begin to fear the worst.

I knew very little about Neal's storied life and career when I saw The Homecoming, but I was instantly mesmerized by her. She was not conventionally beautiful, but her husky voice commanded attention. Her performance was deceptively spare. With little dialogue (Ma Walton didn't want to worry the children), Neal had to wordlessly convey the growing sense of anxiety she felt as each hour ticked by with still no word from her husband. After an agonizing day of waiting, worrying, and fearing the worst, the story ends well. I will never forget the final scene: It's just Olivia and her husband sitting on the couch. After much excitement, the children have been sent to bed. Olivia is holding the flowering plant her husband managed to bring her for Christmas. And they begin to kiss. It's not a contemporary love scene – they remain fully clothed, but there is heat. Their exchange is tender and delicate, infused with desire, affection, and relief, as Olivia and her husband are reunited after a long separation. But what was most memorable of all was how Neal was able to express both the feeling of desire and the pleasure of being desired. Her performance in that small TV movie was large, and the depth of it required you keep your eyes on her. You wanted to keep your eyes on her. I have tried to think of a contemporary actress who comes close to Neal's ability, and no one comes to mind.

It's just a coincidence that Neal's death came on the day before MTV announced that 23-year-old Gabi Gregg would be the network's first Twitter jockey. She was selected in a nationwide competition, and it's now her job to report on pop culture for the network through social media. Now I know it's become popular to decry social media, especially Twitter, for limiting our attention span, and I imagine that since Gregg's role is named after Twitter, she was good at short and pithy. But I can't help but notice how someone like Neal, whose work demanded patience and attention, could be considered dull and anachronistic to those fueled by the constant go-go-go of contemporary media. I know there are no absolutes in our changing media climate, but the loss of the ability to appreciate the work of someone like Neal is, well, a loss. And yet I'm intrigued with Gregg, the blogger behind Young, Fat and Fabulous, and her potential star power. Maybe, just maybe, there's still room for both.