Austin's zombie girl taps into vamps for her third feature "Hi," she says. "My name is Emily Hagins, and I'm really excited about my new movie called My Sucky Teen Romance. It's ... about these geeky kids who go to this sci-fi convention every year, but this year's a little bit different because when they go they meet these real vampires who show up at the con dressed as fake vampires. And so the kids have to use what they know about vampires and pop culture and everything that they can draw from to stop these bad vampires from taking over the con."

The shot is tight, the camera jiggles now and then, but it's a smart, professional movie pitch. The walls backgrounding Hagins are covered with readily identifiable movie one-sheets – Sin City, Team America: World Police, Land of the Lost, There Will Be Blood, Iron Man – but off in the lower left-hand corner of the frame, you can also just make out a cluster of pink, orange, and teal Care Bears plush toys.

"I'm 17 years old now," Hagins continues. "I'm about to graduate high school, and I feel like I've made a lot of things, and I just want to take everything I've learned from those projects and put it towards this film and make it the best it could possibly be.

"I really hope that's enough to convince you to help make our project possible by contributing a donation. I think we have some interesting perks for you guys, and thank you for taking the time to watch my video. And have a good day."

That's Austin-based teen filmmaker Emily Hagins' video pitch for her third feature film, as posted on the IndieGoGo.com independent film-funding platform. IndieGoGo, similar to other new-paradigm funding websites such as the equally popular Kickstarter.com, is part of a new wave of Internet-indigenous funding sites that allow filmmakers to shoot their own pitches for potential investors, place them online with accompanying relevant information and particulars about the upcoming productions, and then, essentially, try to meet a capped amount of donations in a given amount of time. (IndieGoGo and Kickstarter vary on certain aspects, such as the percentage they take – or don't take, if the time limit expires before the funding cap is met, in the case of Kickstarter – but they're both working toward the same goal: namely, helping microbudgeted indie filmmakers get enough seed money to at least begin production on their films.

Hagins' My Sucky Teen Romance, then, is officially green-lit, not by a studio but by herself and her longtime (well, since she was 12) production company, Cheesy Nuggets Productions (www.cheesynuggets.com). As Hagins informs me, this initial $8,000 is slated almost entirely for the film's art department – another IndieGoGo funding project will be initiated once principal photography, which began in mid-July, is completed by the first week of September. Which, of course, is when classes begin again for Hagins, who attends LBJ High School's magnet school, the Liberal Arts and Science Academy. Summer goes by so quickly when you're a kid, doesn't it?

If the name Emily Hagins is new to you, then chances are you haven't been attending the past half-decade's worth of Fantastic Fests. That's where, in 2009, the documentary Zombie Girl: The Movie premiered locally, having already brought home a Spirit of Slamdance award from that year's fest. Directed by Austinites Erik Mauck, Justin Johnson, and Aaron Marshall, Zombie Girl provides a handy backstory to Hagins' debut feature, Pathogen, a bloody good (caveat: bloody good for a 12-year-old) zombie-infestation flick shot with the assistance of friends and family that she wrote/shot/cut in 2005.

It's rare if not completely unheard of that an audience and filmmaking community such as Austin's gets the chance to witness the maturation of a filmmaker from puberty onward, but, remarkably and inspiringly, the ongoing saga of Emily M. Hagins – teen filmmaker, guts 'n' gore-drenched zombie fan, and Care Bears connoisseur – provides just that.

Asked about how he's seen Hagins grow as a filmmaker from his days documenting the often scattershot, on-the-fly production of Pathogen, Zombie Girl's Erik Mauck says: "The weird thing is that Emily today is almost the same as the Emily that made Pathogen. Not in the technical sense – she's grown by leaps and bounds since then, obviously – but because even when she was that awkward 12-year-old girl, she was able to describe to you exactly what she wanted. It was almost like talking to an adult filmmaker."

Hagins' girlish poise behind the camera and in interviews belies her earlier, noncomedic subject matter: Pathogen featured enough wet red stuff to make Evil Dead-era Sam Raimi proud, and even Hagins' admittedly troubled sophomore feature, the relentlessly downbeat family-curse melodrama The Retelling (loosely based on the old Japanese folk tale Hoichi the Earless, best known in the West as part of Masaki Kobayashi's eerie classic Kwaidan), had a surplus of splashy bullet hits and even (spoiler alert) outright matricide. This from a then-15-year-old girl whose high school yearbook photo probably has the tagline "Most likely to be really sweet 4-ever."

So what, exactly, were the formative filmic experiences that led her down this darkened cinematic path stalked by zombies, ancient curses, and bloodsucking freaks? George A. Romero's Dead flicks? Operatic Lucio Fulci goregasms peeped on the sly? Devil Times Five?!

"Um ... I know I watched The Muppet Movie over and over again from the time I was around 6 months old," Hagins explains. "And I saw Spy Kids, like, eight times when it came out."

Okay, granted, you probably weren't expecting her to cite Orson Welles or, thank goodness, Andy Milligan, but The Muppet Movie?! (Hang on there – wasn't Vincent Price a guest host on The Muppet Show? Ah, but alas, Hagins wasn't even born when Jim Henson's genius variety show went off the air in 1981.)

Obviously, she's matured since then, in all ways.

"Pathogen and my second feature, The Retelling, were very different experiences for me. Pathogen was on the fly, all the time. We were just trying to figure out what to do the next day while we were shooting. With The Retelling, the technical aspects improved a lot: The sound is good; the picture is clear, for the most part; and it was just a more professional-looking film. We lost a lot of footage night-shooting, and there were times when it was just not a fun experience."

Now, with Hagins beginning work on her third feature at the still-tender age of 17, you really have to ask: What's the secret to Hagins' unheard-of five-year run as a teen filmmaker? How, when most kids her age would have hung up their boom mics and lavaliers ages ago to focus on more traditional teenage girl pursuits – like, say, boys or hanging out at the mall – has she managed to script, cast, shoot, edit, and release not one, not two, but – fingers crossed – three feature films, all before the ancient age of 18?

Hagins pauses to think before answering, and then says: "I think the best advice that anybody ever gave me was just to persevere and never give up, no matter what happens, because those accidents and problems along the way can turn into happy accidents. You never know. And I've followed that advice on every film."

Sage advice. Can we ask from whom?

"Did you ever see that Raiders of the Lost Ark adaptation?"

You mean Raiders of the Lost Ark: The Adaptation, the shot-for-shot remake of Steven Spielberg's Raiders, by Eric Zala, Jayson Lamb, and Chris Strompolos? (See "'Lost Ark,' Resurrected," May 30, 2003.)

"That's the one. I was there when they screened that at the Alamo when I was 10 years old, and during the Q&A I asked them what advice they would give to a young filmmaker. That was their reply to me: 'Never give up.' And now I'm giving that same advice to young filmmakers who come up to me saying: 'This is hard! What do I do now?!' Hey, I've been in that boat."  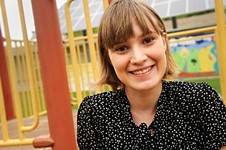 Growing Pains
Emily Hagins became a household Austin name for her work as a teen director, but what happens when that novelty wears off?