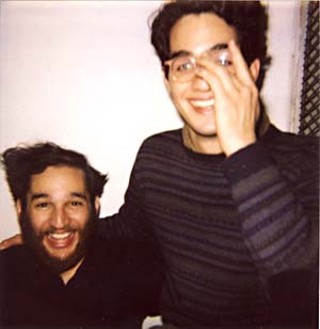 When Dad is just a big kid himself, what becomes of his children's upbringing? That's the question that filmmakers Josh and Ben Safdie explore in this semi-autobiographical work. Basically a three-character study, Daddy Longlegs looks at the relationship between adult Lenny and his two young sons, Sage and Frey, as the boys try to negotiate the residue of feelings they have for this irresponsible yet spontaneous grownup. The film is both a critique of Lenny's parenting skills and a love letter to their own father, who taught them a great deal about living in the moment and the illusiveness of reality. "He planted a seed of reflection in us," says Josh in a phone conversation.

The Safdies' chaotic childhood is concentrated into the film's two-week period, during which the boys stayed with their divorced father every summer. As witnessed in the film's opening scene, the fictional Lenny turns the act of getting three ice cream cones into a complicated (and ultimately flawed) tactical maneuver. Even though Lenny loves being a father, his many shortcomings as a parent are obvious. Yet the real Safdie père, Alberto, is probably responsible for igniting the filmmaking bug in his sons by shooting hundreds of hours of home movies of them as children.

"When we were going through all this trauma as kids," says Josh, "we were always told as a comfort, 'Well, one day this will make a great movie.' Ever since then, we've been flirting with the idea of reality. We were the only constant in each other's lives. We developed our own language that was kind of intuitive. From the beginning on we were stealing our father's camera and constantly shooting little things and working with each other. I tend to romanticize a situation, and Benny can be very critical. We're both very interested in the mesh of those two things and how they complement each other. We've been making films together for a long time."

Ronald Bronstein, who plays Lenny, was instrumental in helping the filmmakers translate their personal impressions of their father into a fleshed-out fictional character. Bronstein is also a filmmaker (his challenging feature Frownland premiered at the 2007 South by Southwest Film Festival, where it won a Special Jury Award). In fact, the existence of Daddy Longlegs is a testament to the influence of the Festival: It is where the Safdies and Bronstein first met. Attending the awards ceremony, Josh recalls how "Bronstein gave an amazing speech about anti-careerism," which struck a chord in him. "Afterward, someone who worked for South by Southwest grabbed me and took me over to Ronnie and said: 'You two need to know each other. You will both enjoy each other's movies.'" Turns out that hunch was right. "Ever since then," says Josh, "he, me, and my brother have been best friends." And collaborators, too.

Daddy Longlegs screens at the Alamo Drafthouse at the Ritz July 18, 19, & 21 as part of the SXSW Presents series. See Film Listings, for showtimes.