All Shades of Black

How do you define film noir? 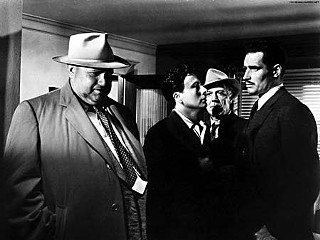 In a couple of weeks, Olive Films will release three mostly forgotten films from the Fifties – Union Station, Appointment With Danger, and Dark City. Ordinarily, these films might have never been released on DVD, but the distributor has cannily packaged the discs as film noir, which gives them genuine commercial potential. Are they legitimate film noir? The answer is mostly no. What is interesting is how sexy film noir has become in terms of marketing.

Film noir has had a long, tortured, and continually debated existence. In the years of its most classic period (1941-1958), no filmmaker deliberately set out to make a film noir. He may have been interested in incorporating many, if not most, of the philosophical, narrative, and visual elements that would come to define film noir. Still, even after the term came into usage it was more descriptive than proscriptive.

Film noir, which originated with French film writers, translates as quite literally "black film." It refers to a style shared by certain American studio films. During World War II from 1941 until 1945, most of France was occupied or controlled by the Nazis in one way or another. Among the lesser consequences of the tens of thousands that resulted from this situation was that, not surprisingly, American Hollywood films were not seen in France for most of half a decade. When they began to be shown again in 1946, the French noticed that a number of these films seemed darker, more fatalistic, less optimistic, and more psychological than prewar releases. Almost all the films were crime and mystery films often featuring a femme fatale and a private detective protagonist, usually of the hard-boiled variety. These films not only shared narrative and thematic traits but stylistic ones as well.

But in the United States, it really wasn't until the late Sixties and Seventies that film writers and retrospective programmers really began to deal with film noir. The films, both individually and in multifilm packages, began to increasingly show up in repertory film programming on college campuses and at arthouses. Scholarly studies and film histories also began to address noir, discussing both what films the term covered and the cultural and sociological implications of these films. There has been an ever-accelerating academic and programming interest in noir since. In a time of accessible home entertainment, noir has gone from being a much-debated theoretical term to a regularly and aggressively used marketing tool. In a way, the DVD release of Union Station, Appointment With Danger, and Dark City clarifies where that journey is currently.

Most agree that the term "film noir" generally refers to certain films released in the period between John Huston's 1941 adaptation (the third) of Dashiell Hammett's The Maltese Falcon and Orson Welles' Touch of Evil in 1958. Films almost universally acknowledged as noir classics include Murder My Sweet, Double Indemnity, Laura, Phantom Lady (1944); Detour, Scarlet Street, Mildred Pierce (1945); The Big Sleep, The Postman Always Rings Twice, The Killers (1946); Crossfire, Lady in the Lake, Out of the Past (1947); The Big Clock, Force of Evil (1948); Criss Cross, Gun Crazy (1949); Where the Sidewalk Ends, The Asphalt Jungle, D.O.A., In a Lonely Place (1950); and Angel Face (1952).

"By 1949 American movies were in the throes of their deepest and most creative funk," wrote Paul Schrader. "Never before had films dared to take such a harsh uncomplimentary look at American life, and they would not dare to do so again for twenty years." Schrader was one of the earliest and most persuasive champions of film noir. As editor of Cinema, he published other film writers on noir. He also wrote and edited a landmark epic consideration of Joseph H. Lewis' Gun Crazy that heavily influenced subsequent critical considerations about B-movies and noir. Schrader lasted only a year (1970) as editor at Cinema. Consequently, his seminal essay "Notes on Film Noir" was published in Film Comment in 1972. (Schrader would soon graduate to authoring screenplays, co-writing the script for Sydney Pollack's underrated 1975 film The Yakuza, followed by screenplays for such films as Taxi Driver and Raging Bull, and in the late Seventies he started directing his own films, which include Blue Collar, Cat People, and Affliction.) 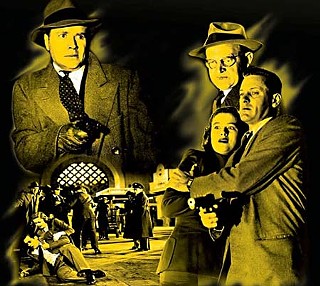 What exactly constitutes film noir – is it a style or a genre; does it designate a historically specific period, or is it universally applicable – has been debated since the term was introduced. The term has been applied to many foreign films as well as Hollywood releases. It's been used to describe films released from the silent period through the present. Chronicle Publisher Nick Barbaro once argued that almost any black-and-white film was noir.

In his essay, Schrader goes for a definition that is not as expansive as many others but instead is very limited. "Film noir is not a genre. ... It is not defined, as are the western and gangster genres, by conventions of setting and conflict, but rather by the more subtle qualities of tone and mood. It is a film 'noir,' as opposed to the possible variants of film gray or film off-white.

"Film noir is also a specific period of film history, like German Expressionism or the French New Wave. In general, film noir refers to those Hollywood films of the Forties and early Fifties which portrayed the world of dark, slick city streets, crime and corruption. ...

"Almost every critic has his own definition of film noir, and a personal list of film titles and dates to back it up. Personal and descriptive definitions, however, can get a bit sticky. A film of urban nightlife is not necessarily a film noir, and a film noir need not necessarily concern crime and corruption. Since film noir is defined by tone rather than genre, it is almost impossible to argue one critic's descriptive definition against another's. How many noir elements does it take to make a film noir noir?

"Rather than haggle definitions, I would rather attempt to reduce film noir to its primary colors (all shades of black), those cultural and stylistic elements to which any definition must return."

The American film community's start and stop, jerking forward and backward focus on film noir finally evened out by the late Seventies. Still, it wasn't until the Eighties that the definitive books on noir were published, including Barry Gifford's 'The Devil Thumbs a Ride' & Other Unforgettable Films (1988). A leading scholar and writer on the topic, Alain Silver edited several of the most important works including Film Noir: An Encyclopedic Reference to the American Style, Third Edition, co-edited by Elizabeth Ward (the first edition came out in 1979), and Film Noir Reader, co-edited by James Ursini (1996).

Over the years the popularity of noir has remarkably and consistently grown. In our age of DVDs, cable, and movies on demand, more and more titles that really shouldn't be are described as such, with an almost unimaginable generosity (or is it just consumer-tempting mispackaging?), are now labeled noir. As Barbaro once argued, one can almost hear the packager saying, "Well it is in black and white." There are sets of noir Westerns (a misnomer to begin with, but the selections are beyond ridiculous), and noir comedies can't be far behind.

Appointment With Danger and Union Station are lots of fun to watch. They are both urban mysteries/crime films, in black and white and with night scenes. If that is enough to make them film noir, then I suppose they are, but by most reasonable standards that's beyond a stretch. William Dieterle's Dark City (starring Charlton Heston) is more of a noir, but in the ways that term is descriptive rather than qualitative. I could offer reviews of all of these films, but they were all programmers when released and remain programmers now. Not a bad way to kill some time, but just don't expect any revelations, especially those so common in the really great noir films.

Film noir is a historically restricted style. Since so much of this style – urban setting, mystery or crime, lots of night shots or ill-lit settings – is shared by other Hollywood films of the same period, it is hard to hammer out a definition that is quantitative and always applicable. In the end, the argument is that what separates a noir film is tone and attitude, one often dependent on the unique talents of a director, actors, and cinematographer, sometimes with one dominating and sometimes as a team. It may seem like cheating, but the most definitive answer is on the screen. 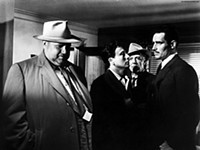 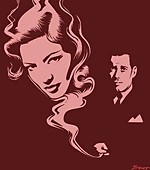 Letters at 3AM: In a Lonely Place
Film noir is a cinema of failure