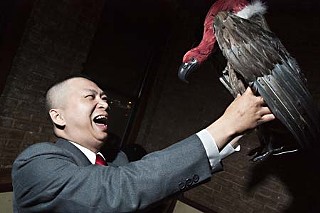 "Director James Nguyen is a Moviehead! Also known as Master of Romantic Thrillers. He has extensive experience in the film industry. In 1998, he founded Moviehead.com [sic]. In 2001, he produced and directed Julie & Jack – a romantic thriller about love and spirituality. ... Julie & Jack stars Ms. Tippi Hedren (Hitchcock's The Birds). In 2004, he completed a second film: Replica – a romantic thriller. Recently, James completed directing Birdemic: Shock and Terror, a romantic thriller about a platoon of eagles & vultures attacking the residents of a small town. Currently, James is working on the sequel, Birdemic: The Resurrection."

I had a friend named Wren who was terrified of birds. Whenever we'd be hanging around outside, say, at the lake, or even just sitting outside on her South Austin apartment's stoop, she'd always eye the sky warily, peering upward through her thick blue-black mop of hair and worrying about feathers and talons and the beating of wings against her face.

It was cute, in a weird, mid-1990s, South Austin sort of way, until the day a couple of crows – I think they were crows; their iridescently dark wings nicely complemented Wren's ivory-goth pallor, anyway – dropped out of a pale blue October sky one day and flew into her head while we were drinking wine out of chipped coffee mugs on her balcony. She screamed bloody murder and leapt up off her chair, dousing us both in cheap Merlot and almost going over the railing in the process. I realized immediately, subconsciously, that the beaky pair were probably performing some aerial mating display or chasing down stolen food or whatever. What they weren't doing was attacking Wren, surely. But I screamed bloody murder, too.

I blame Alfred Hitchcock, in large part because I'd grown up watching The Birds over and over again on television or at revival houses in upstate New York.

So does James Nguyen, the Da Nang-born director of Birdemic: Shock and Terror, a strangely affecting "romantic thriller" that's superseded Tommy Wiseau's strangely icky The Room as the most reverently bad/good/awesome midnight draw around. Multiple showings of Birdemic at the Alamo Drafthouse have sold out the house, partly because, as Patton Oswalt said of Birdemic's laffy-taffy, freakout vibe to The Village Voice, "It's like everyone in the world escaped from that lodge in Twin Peaks. The cars behind them and the clouds in the sky move at a regular pace, but they're not moving at a regular pace. It's at odds with reality." Accurate.

The plot, as Nguyen readily and frequently admits, is lifted in equal parts from three primary sources, only one of which is Hitchcock's The Birds.

"Another inspiration for Birdemic: Shock and Terror was An Inconvenient Truth," said Nguyen from his home in San Jose, Calif. "You know, in his presentation from the stage, Al Gore did mention about global warming harmfully affecting the migration cycle of birds, in a bad way. And then the other inspiration was Francis Ford Coppola's Apocalypse Now."

And how, exactly, did Coppola's epic sojourn into the heart of Kurtz-ness influence Birdemic? 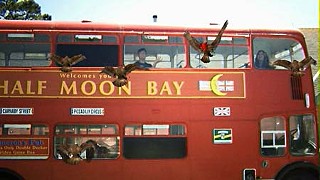 The dark heart and idealistic soul of Birdemic, though, is most assuredly Hitchcock's avian "romantic thriller." Nguyen's passion for the film (and Hitch in general) is plenty evident in everything from his film's languid, Vertigo-esque score, credited to Andrew Seger, to Birdemic's entire first half – all romance, no thriller – which positively reels from cringeworthy moments that accidentally (or perhaps not) strip-mine life's little foibles, not least among them a corporate sales meeting that goes on ... and on ... and on. Oswalt is right. At its most absurd, Birdemic operates with an illogic all its own – David Lynch meets, um, James Nguyen while dangling upside-down from the jungle gym at Bodega Bay PS 1. Eerie. At its best, Birdemic plays like a modern Situationist détournement riff on all things Hitchcock. Surreal.

It's not until 47 minutes in that the actual Birdemic takes flight, as Rod and Nathalie, having recently consummated their semilove, awake to a squawky chorus of what sounds like seagulls on acid just outside the windows of their no-tell motel. A quick peek out the window on Nathalie's part reveals the awful truth: Eagles can hover, but only if they're digitally rendered with a (delicious, meaty) eye socket toward Sega Genesis-era graphics. "What's going on? Can they get in?" quavers Nathalie. "Not for the moment," deadpans a clueless Rod. Awkward, right? Oh, and sometimes they just plummet right out of the sky and splap on the pavement with a wet thud. Try that, Hitchcock – or Mr. Hitchcock, as Nguyen would say.

"The main influence on Birdemic: Shock and Terror was Mr. Alfred Hitchcock's 1963 film, The Birds," says Nguyen, "which was his last great movie, his last masterpiece. It was made in 1962, but it was very prophetic. It was way ahead of its time because it dealt with environmental issues and even global warming. Even in the restaurant scene, where the woman bird expert mentions that birds have been around for millions of years and man has been doing bad things to birds, and so on. It's very prophetic.

So do we. With vultures that have acid for blood. How cool is that? Granted, Nguyen, who actually did shoot a film with Hitchcock's leading lady Tippi Hedren (2003's Julie & Jack), is no Hitchcock. Birdemic is chock-full of bad acting, bad editing, and just plain bad filmmaking, but somehow the whole is greater than the sum of its parts, which results in a "so bad it's actually pretty sublime" counterreality that takes place in a world that accommodates young lovers, winged catastrophe, sex advice from squirrelly co-workers, and roving Centers for Disease Control and Prevention crisis guy Dr. Jones (Rick Camp), who, like Clarissa or grave-robber-from-outer-space Dudley Manlove in Ed Wood's Plan 9 From Outer Space, shows up at the start of Act III to, literally, explain it all:

"What I do know is that global warming is causing viral diseases such as bird flu, West Nile virus, and SARS. ... I'm a scientist, and I can't state any scientific fact without evidence, but there is scientific evidence to show that, because of our burning of fossil fuels and the creating of greenhouse gases – which is causing global warming – it's raising the temperatures of the seas, and, and species like the krill are dying. So many bird species can't find food, so they eventually starve and die and wash up on the shore. ... In fact, in the last few years more than 40 species have become extinct because of global warming. However, there is an interesting research: In prehistoric times, birds did attack cavemen. They used to claw at their eyes and skull and then either leave them for dead or then come back because their injuries were so bad and finally finish off the kill." Science: You can't argue with it, but you can turn it into a mesmerizing, rambling monologue.

Nguyen is (somewhat) aware that the majority of audiences flocking to Birdemic aren'tqueueing up for anything remotely resembling The Birds or, for that matter, An Inconvenient(er) Truth. Like The Room or Troll 2, Birdemic is a slipshod yet painfully sincere celebration of one filmmaker's ceaseless drive to make the film he wanted to make, and then, with luck, to get it out there into the mainstream any way he can. It may take a decade (or nearly two, in the case of Claudio Fragasso's Troll reimagining), or it might happen virtually overnight, after a woefully sparse ad hoc screening on the final night of the 2009 Sundance Film Festival catches the eye of someone with connections.

Such was the case with Birdemic, which was "discovered" by then-Troma Films associate Evan Husney, who caught the film at a decidedly non-sold-out bar screening and ended up falling in love with both film and filmmaker. Husney, who would later take the film to indie film distributor Severin Films, recalls that "James was buying drinks for everybody during the screening, and when he went to cash out his tab, he didn't have enough money. He ended up arguing with the bartender, who was holding this poor man's stuffed bird as collateral until James could pay the bar tab that he ran up buying drinks for the five to seven people that were at the screening. And that's basically how my relationship with James Nguyen started. We paid his bar tab, which was, like, $15."

Love it or hate it, ultimately the key question is whether audience members are laughing with or at Birdemic.

"We've sold out every screening this year," enthuses Nguyen, "from the Hollywood premiere in February, to New York, Austin, and we just got back from the UK – the United Kingdom, England – and so I think the majority of the audience really likes the movie, and they are laughing with the movie, despite all of its imperfections in the animation and other aspects. They really appreciate its sincerity and the very serious, compelling story about man and his machines and what that's doing to other species and the planet Earth. And then with a little bit of humor and good casting you can have a hit!

"Sure, there are some people who are laughing at the movie, but I think that's because they are not willing to ignore or forgive the imperfections of Birdemic: Shock and Terror. They think you have to have James Cameron/Avatar perfection or it's no good. You can't make everybody happy."

Birdemic: Shock and Terror screens Wednesday, July 7, 7pm at the Alamo Drafthouse at the Ritz and again on Wednesday, Aug. 11. For more about Birdemic, visit www.movieheadpictures.com. 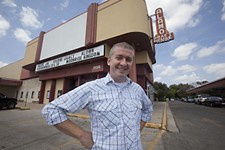