The Cool Keeps On

Fourteen years after AICN woke up the Web, three Austin film sites carry on the tradition

In the beginning, the Geek God rolled an errant dolly loaded with hundreds of pounds of four-color comics, rare cinematic one-sheets, and fanboy ephemera over Harry Knowles' vertebrae. And it was painful. And Harry Knowles was confined to bed for eight score and 10-odd days and was alone but for the Internet. And Harry Knowles did hatch a plan to soothe his aching back and also to ease his sorrows by creating a website to connect with those beyond his infirm world. He dubbed it Ain't It Cool News. And it was cool.

In 1996, when Austin fanboy deluxe Harry Knowles kick-started his already turbocharged imagination and created his film-and-comic book review/scoop/rumor site Ain't It Cool News, there was, literally, nothing else like it in the world. Hollywood.com had been running film news and reviews for a short time previous, but Knowles, whose fortuitous back injury landed him front and center at the birth of the World Wide Web, was a fan unlike any other. His site, with its legions of "spies" reporting in from (eventually) all over the globe, became an underground – and then aboveboard – sensation.

Today, there's still nothing quite like it, and certainly no one exactly like Knowles, Hollywood's redheaded stepchild. But his original idea of a film site that featured input from nonprofessional writers and covered obscure aspects of film and fan issues was fruitful. And it multiplied. Boy, did it multiply. There are uncountable hundreds, possibly thousands of film- and fan-related websites spanning every online region in the world. Most of them are small but passionate little outings with the life expectancy of Arnold Stang in a mosh pit.

But here in Austin – the birthplace of cool, more or less – several of Knowles' direct descendants have made a daring go of it and, against all odds (although odds that grow better by the day, as the line between entertainment and reality continues to blur), have succeeded and, in some cases, prospered. It's now entirely within the realm of possibility to make a decent living simply by being a fan and writing about it online. And that can only be good for film, comics, and imaginations the world over.

"To me, it's just cool, and it makes everything easier for me here in Austin," says Knowles. "It took a while to convince Hollywood to start coming to Austin to do stuff, to team up with me and Tim [League, co-founder of the Alamo Drafthouse]. I think that between the anchor film festivals like South by Southwest, Austin Film Festival, Fantastic Fest, and something like Butt-Numb-a-Thon, plus all the other special screenings that Tim and I do throughout the year has made it easier to create your own film site here in Austin. Because we provide the kind of advance access that the rest of the world is wanting to hear about. Here in Austin people get to see stuff before anyone else, and they want to share their enthusiasm with the rest of the world."

Few post-AICN film websites have been as consistently enthusiastic as Korey Coleman and his gang of rabid film commentators over at Spill.com. They've been so successful at parlaying their original idea (which began as the public access show The Reel Deal back in the mid-Nineties) into a corporate-sponsored but locally run model of How to Do It Right that this coming weekend will see their first-ever Spill Dot Con (see Spill.com for details). Billed as a gathering of the site's far-flung fan-tribe and featuring panels, animation workshops, a site-themed mini film festival, and, of course, afterparties with the legendary likes of Del Tha Funkee Homosapien, De La Soul's Maceo, and Rah Digga, it's a party/confab/meet 'n' greet that serves both to promote the site and spread the love (of film).

"We did The Reel Deal for 10, 11 years," explains Coleman, Spill's top dog and a longtime Austin animator. "It was time to move on. That was right when YouTube was coming up and a bunch of animated online videos started appearing, and I thought that would be something that would be fun to get into and would probably get us a wider audience than what we were doing on public access." 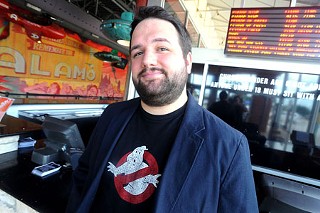 Coleman's stroke of genius – taking the audio from The Reel Deal and coupling it to animated versions of himself and his fellow commentators, who all go by aliases – worked better than even he expected, ultimately resulting in a partnership with media giant Hollywood.com.

Spill.com retains every bit of The Reel Deal's biting, back-and-forth snark-outs, but with some 32,000 members of the "Spill community" regularly dropping in to chat, share info, and view the members' animated (in every sense of the word) gabfests every week, it's left its public access roots in the dust by, well, giving its public even more access.

"My personal goal with Spill Dot Con," says Coleman, "is to have a way for all these people who are already members or fans of the site to gather together and meet each other. And then on top of that they'll be able to learn how the production works, how the site works, and how we all get along with each other. And we're known for interacting with our fans, so it gives us a chance to meet them and take that personal feel that we have on the site even further. It's going to be a laid-back event with a sense of humor, you know? We don't take ourselves too seriously, but at the same time we're pretty serious about what we do."

Like the majority of film sites, Neil Miller's Film School Rejects began as something of a lark, a film-oriented blog with initially minor expectations. This has changed, dramatically, and the site now boasts some 2 million unique hits per month. Pretty good for a band of outsiders, no?

"I started the site in early 2006 in Cleveland, where I was born and raised," says Miller, who serves as the now highly influential site's publisher, executive editor, and head reject. "Some friends and I thought it would, you know, be a nice hobby to put our opinions out there. Over time we figured out we could get some free DVDs out of it, which made us work a little harder on it, and then about a year and a half into it we realized we could actually see movies for free – we thought that was really cool. And then about a year after that, I figured out that I could actually earn a living doing it. And now it's turned into something very real."

Real enough to ally itself with Crave Online film channel, which means that this self-described "pansy when it comes to horror films" is now in charge of a widely read and nationally respected online rag. But don't think that means Miller and Co. have eschewed barbed, back-of-the-classroom rapier wit in favor of preaching to the masses. Far from it. Film School Rejects is at its savvy, savage best when skewering the not-infrequent grandiosity/pomposity of both films and filmmakers. Or screenwriters, in the case of A History of Violence scenarist Josh Olson, who was the subject of a now-infamous post by managing editor/writer Cole Abaius, pointedly titled "Why Josh Olson Is an Asshole." (You can check it out in the Film School Rejects archives.)

So how did a bunch of surly, hyperliterate miscreants from Ohio end up in Austin?

"We were looking for a place that was closer to where movies were being made and where the culture for film was better than Ohio," explains Miller, "and Los Angeles seemed like the next step. But then my managing editor mentioned Austin. I was already in love with the city, having covered South by Southwest a few times, and so we've been here for about a year and a half now." 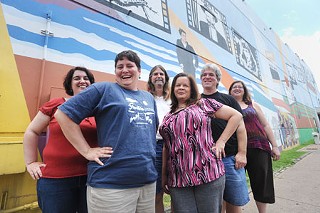 In the intervening time, FSR's staff has grown to include 18 contributing writers and a sizable editorial staff, with four mainstays in Austin and the rest spread out around the country. The site's take-no-prisoners attitude and geographic sprawl make it closer in spirit to Ain't It Cool News than to anything else, but it's still very much its own bestiary.

"The ultimate secret to our success is that we have people who want to write for us in the right places. I look at Film School Rejects as more of a commentary track on what's happening in the world of entertainment. You have a lot of new sites with people who are trying to report what's happening in the world of film, but we really try to bring context to it, to bring spice to it."

Jette Kernion is not a film school reject. Quite the contrary: She has a Master of Arts in screenwriting from the University of Texas and did a postgrad year on a Michener Fellowship (for what was then called the Texas Center for Writers). She knows her movies, sure, but just as important, she knows Austin's movie culture. Her site, the aptly named Slackerwood, mixes local coverage – contributor Jenn Brown's invaluable "2010 Guide to Free (and Cheap) Summer Movies in Austin" is plastered across the front of our refrigerator as we type this – with knowledgeable and spot-on reviews of both major studio releases and local productions. Slackerwood is, for our two bits, the best Austin-based/Austin-specific film site now going, and, as Kernion notes, it's been going for a while.

"I had been writing a column for Cinematical.com, in 2005 and 2006, called 'News from Slackerwood,' and when that was discontinued I thought Slackerwood was such a great name that I bought the domain name. Eventually I cranked up the site and began writing all the Austin film coverage that I normally would have written for Cinematical."

No longer a one-woman show in a million-movie town, Kernion has added writers (and an associate editor) to the site, enabling Slackerwood to expand beyond the local – the site excels at festival coverage such as SXSW and Fantastic Fest – to cover the recent Marfa Film Festival and nearby film shoots such as the Coen brothers' True Grit. And, highest praise of all, Slackerwood just flat-out feels and reads like Austin. It's one of the few locally produced sites that really does help keep Austin weird.

"We really do try to focus on Austin," explains Kernion. "Not everybody does. We're focused on getting people in Austin to see movies and enjoy them, or at least help them avoid the really terrible ones. We also strive to introduce them to films and filmmakers that they may not know about that are here [in Austin]."

Has Richard Linklater ever commented on the site's name?

"Not really. He knows about it, because I've interviewed him. We've had some great comments when we do red carpet interviews, though. We had somebody say 'Y'all sound like a bunch of pot-smokers!' That was Cheryl Hines, who was at Austin Film Festival with her film Serious Moonlight."

Like we said. Slackerwood: Keeping Austin weird and dang proud of it.