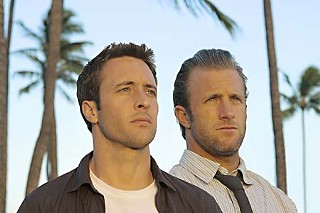 The more things change, the more they stay the same. At least that's the sense I got watching online previews of new series presented at this year's network upfronts. The upfronts are traditionally the time for networks (particularly broadcast networks) to trot out their new series for potential advertisers. It strikes me as curious that with all this social media at our fingertips, the old dog-and-pony show still prevails to curry the favor of advertisers, when in reality, they should be testing the waters with actual viewers – then advertisers would have a better sense of where to sink their ad dollars, wouldn't they? Why not do a week of "first looks" where viewers could either log on or watch clips over the air and voice their reaction, American Idol-style. Or via Twitter. Or – how quaint would this be? – via an old-fashioned paper ballot sent somewhere in exchange for a free sample of XYZ product or a chance for you and your couple of hundred Facebook friends to get a copy of this audio download or that new book or your name in a drawing .... I could go on and on. And my ideas aren't particularly inventive.

As for the actual TV fare being vetted, there are few surprises in the mix: still lots of cops, lawyers, procedurals, and some action and adventure. By far the most interesting move was by CBS, which canceled a whopping eight series from its lineup, making room for remakes (Hawaii Five-O, The Defenders, and a Criminal Minds spin-off) along with comedies to augment its existing youth-oriented series. The buzziest new comedy has to be the William Shatner vehicle, $#*! My Dad Says, based on a Twitter page by Justin Halpern that chronicles his father's often hilarious, always colorful bons mots.

It's dangerous at this point in time to tout anything too seriously – schedules change; titles change. Sometimes, even casts change. But I've already found myself drawn to several new series, including the new J.J. Abrams series, Undercovers (NBC), about a couple redrafted into the espionage business, and No Ordinary Family (ABC), about a family that goes away on vacation and returns with superpowers. I'm not a huge fan of police dramas, but Detroit 1-8-7 (ABC) starring Michael Imperioli (The Sopranos, Life on Mars) looks promising because it appears to tap into the zeitgeist of a city, in the way that the marvelous Treme (HBO) does with New Orleans; I'm curious if the same will be said of the Austin-based My Generation (ABC), the new series with a title from an old the Who song (see "Our Town," May 21, 2010). The most astonishing thing I've gotten a glimpse of will not appear on traditional broadcast TV but on public television. PBS held its annual conference here in Austin in mid-May, and it was at one of the previews that I saw an extended clip of Macbeth starring Patrick Stewart, as part of the Great Performances series. In a word: stunning.

Next time, remarks about Fox and the CW series. In the meantime, here is a list of "bubble" shows that managed renewals and those that got the axe:

Actor and director Clint Eastwood is featured in a 24-hour Memorial Day marathon of some of his career-defining films. The Eastwood Factor, a documentary on Eastwood's life and career, produced, written, and directed by Time Magazine's longtime film critic Richard Schickel, airs twice during the marathon, on Turner Classic Movies. Check listings for films and airtimes.

TCM will also be screening war-themed films all weekend, and an encore of the 12-part series The Pacific will air on HBO May 30 and 31. Check local listings.

TV Eye: Front and Center
Eyeballing what NBC and Fox are serving up in the the fall