Just a few weeks ago, the Chronicle wondered if Austin could become a sustainable center for TV production. The jury's still out – as is Friday Night Lights, currently shooting its fifth season locally – but there's cause for cautious optimism, packaged in an hourlong drama called My Generation (originally titled Generation Y). Austin-based writer Noah Hawley (creator of the gone-too-soon The Unusuals) announced via Twitter last week that his pilot, which was set and shot in Austin, was picked up by ABC for a fall premiere, and at ABC's upfront presentation on Tuesday, May 18, the network revealed a high-profile slot for the show on supercompetitive Thursday nights.

Press materials describe the show thus: "In 2000, a documentary crew follows a disparate group of high schoolers from Greenbelt High School in Austin, TX as they prepare for graduation, then revisits these former classmates ten years later as they return home to rediscover that just because they're not where they planned doesn't mean they're not right where they need to be."

That means Austin will figure prominently in the series. But are we talking Austin-Austin or Austin-by-way-of-a-Burbank-studio-lot? We put the question to Hawley point-blank – will the series stay in Austin? – and he responded with an emphatic, "It absolutely will." 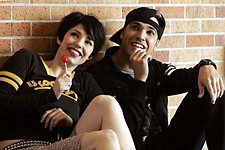