We've reached a tipping point in the history of filmmaking, one where the tools and media of a traditionally cost-prohibitive art form are now within the reach of literally everyone with the hands to grasp and the notion to create. Nowhere is this more apparent than in the avant-garde, which almost by definition seeks to mash up various film and art strategies into a perpetual critique and commentary on culture, pop and otherwise.

One such artist is Caroline Koebel, whose films, not least among them the incensed and incendiary "All the House (Haditha Massacre)," collide wartime reportage and human outrage and create both a searing critique of modern media manipulation and a parallel artistic tack that uses the very instruments of the American media machine against itself. It's a culture-jamming strategy Guy Debord and the Situationists would doubtless applaud, but Koebel, a recent transplant from New York to Austin, has more on her mind and in her sights than simple manipulation of the image, the form, and the tools of wartime media; she's intensely interested in capturing what she calls "unsculpted moments," those times when the mediasphere drops its guard and looks, for a moment, almost spontaneous.

The Austin Chronicle spent an afternoon with Koebel, discussing her influences, her work, and its place in the ever-quickening world of cinematic art, analog, digital, and otherwise.

Caroline Koebel: I was born in 1967, and my family didn't go to the movies too regularly, although I do have some early childhood memories from Columbus, Ohio, where my family moved when I was about 7. I have these memories of going with my parents and my older brother to the drive-in. We had an old Plymouth Valiant, with the kids in back with our sleeping bags. I remember seeing all of those gangster movies and just feeling so afraid and excited and then, inevitably, falling asleep. My elementary school in Cambridge, Massachusetts, also had some sort of community film program, and I recall sitting on these uncomfortable folding chairs and watching Paul Newman in Cool Hand Luke. That made a huge impression on me. I must have been only 5 or 6 years old.

AC: That egg-eating contest sticks with you.

CK: I think maybe that has played a part in my enthusiasm for performance art.

AC: What about other media from your youth, such as television? Was that part of your formative filmic experiences as well?

CK: We only had a small black-and-white television set that you had to hit to get any reception on. It had a rolling picture, all staticky, and you just had to keep hitting it until the picture resolved itself. Finally, that broke, and my parents, not necessarily out of principle but for whatever reason, failed to replace the family television, and so my household ended up being the only one without a TV set. After that, I basically grew up without television.

AC: Can you draw any lines from your younger self beating on that vertical hold-challenged television set to the seemingly chaotic avant-garde filmmaking you've made your life's work?

CK: That's beautiful! I haven't consciously connected the two until now! But I do have clear images in my head of the struggle with the TV between clarity and abstraction, and I suppose it's true that that's what I'm interested in now in terms of my own approach to the medium, and especially the work from the Flicker On Off trilogy and the "All the House (Haditha Massacre)," which I post-produced at the Experimental TV Center in Owego, New York, where I had a residency. They have these amazing resources for both old-school and new-school video processing and image generation, as well as online digital content and resources.

AC: Let's talk about "All the House (Haditha Massacre)."

CK: With that particular one I was the most conscious of the interplay between the old and the new, and I very intentionally went for that tension between clarity and a realistic image and then just utter, beautiful abstraction. So that one is very reminiscent of that early TV set, pounding on it to get the image to become Sesame Street or Zoom.

AC: What defines a Caroline Koebel film or artwork?

CK: I'm not a documentarymaker per se, but at the same time I'm also not so beholden to the avant-garde aesthetic for the sake of the aesthetic. I'm committed to this place between the two that fuses journalism with an exploration of the aesthetic.

AC: So how would you define the avant-garde aesthetic in terms of your own work?

CK: I don't want to essentialize anything or downplay it, because there are filmmakers and artists who harness that aesthetic in order to bring it to a very new place. And that's what I hope to do with my own practice. But, for instance, when a work is formulaic – not necessarily in a commercial way but in an easy, avant-garde, experimental way – for me that's typically when the beauty of the image is the means to an end and the end. Sometimes that works for me. When it's about the awe-inspiringly beautiful vision, it works, but sometimes it seems people commit themselves to the image being processed in a particular way, or the use of color, that then doesn't necessarily lead outside of itself.

AC: People can approach the avant-garde with preconceived notions of what it is, which in turn can become self-limiting for both the audience and the artist.

CK: Right. So many people love the work of Chris Marker, and so do I, but I would say that he's the exact opposite of any kind of trap that one might fall into in terms of endlessly repeating oneself or recalling a tradition without going elsewhere with it. I think that I and all of us in the avant-garde world hold somebody like Chris Marker up as a beacon in filmmaking, art, writing, and the avant-garde.

AC: What filmmakers influenced you when you were first starting out?

CK: I've always looked to somebody from the canon like Maya Deren, who continues to be important to me. I was probably around 18 when I saw her film "Meshes of the Afternoon" that she did with her then-husband Alexander Hammid when they were out in Los Angeles in the Forties. I remember seeing that for the first time right after I had moved from the Midwest to California to go to college. Like with so many other young, impressionable sorts, it meant a lot to me then, and by now even though I'm so familiar with "Meshes of the Afternoon" I continue to be thrilled by it. I will never stop being in love with Kenneth Anger's work from the Fifties. "Fireworks," "Scorpio Rising," "Eaux d'artifice," "Rabbit's Moon" ... those films that he made more than 50 years ago were so groundbreaking for their time, yes, but for me, when I return to them, they still seem totally ....

CK: Absolutely, fresh. And I just think they're so sexy. When I went to Berkeley and became a film studies major in the mid-Eighties, I saw a lot of amazing works in the classroom. And Pacific Film Archive was right there. They were constantly having screenings of obscure filmmakers, world cinemas, and avant-garde histories.

Another filmmaker who I was totally floored by was Werner Schroeter [the German writer/director and Fassbinder contemporary who died last week at the age of 65]. I haven't seen any of his films in a long time, but I keep imagining the day when I will see his work again. He's on my mind because the other day I was clipping some roses in my yard and I thought the rose bush must be very old because I kept pricking my fingers on the thorns. These days roses are grown without thorns or with very small ones, but with this incredibly fragrant bush I literally had blood running down my fingers. And it struck me that this is why so many poems have been written about roses, because you have both the pleasure and the pain embodied in one flowering plant. Which then reminded me of the Schroeter film Der Rosenkonig [The Rose King].

AC: The tools of filmmaking and, really, the entire mediasphere are now going through this riot of change and flux via online and digital tools. In your art, you use both old-school film stock and new-school techniques, but do you have a preference between the two?

CK: That's where I think I'm a true avant-gardist and an experimentalist because I just get excited about the different challenges I have to resolve and tackle. For me, my practice is less contingent on any givens and more situational. There's a problem, and it's your pleasure and frustration to solve it. Sometimes I'm so frustrated I'm incapacitated, but then it's more about figuring out a crack in the edifice and just being delighted to be able to insinuate yourself into that crack.

Caroline Koebel's short films will be screened at the next Avant Cinema on Thursday, April 29, at 7pm at the Austin Studios Screening Room, and a Q&A with Koebel follows the program. For more info, visit www.austinfilm.org. 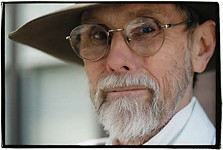