Aligning Body and Mind in an Unlikely Place

'Trinidad' premieres on LOGO and DVD 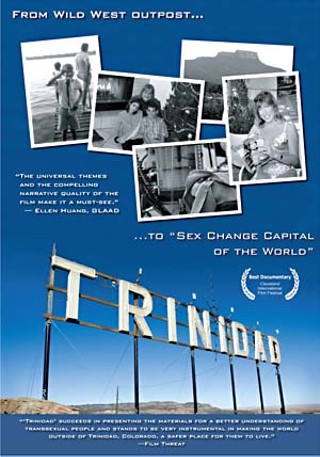 At first glance, Trinidad seems like a town built on contradictions. A former mining community in Colorado with deep conservative and Catholic roots, it became a sex-change mecca when Dr. Stanley Biber set up shop in the late Sixties. (To pile on the improbabilities, Biber himself was – in addition to being a guiding light for transsexuals – a Jewish cattle rancher and father of 10.) But as one character astutely points out in Jay Hodges and PJ Raval's fascinating documentary, the hardscrabble town of Trinidad is still technically frontier land – and what better place for pioneering?

Trinidad follows the stories of three women who have either undergone male-to-female genital reassignment surgery, including Biber's surgical heir, Dr. Marci Bowers, or are transitioning. They grapple with the town, with renegotiating personal relationships (all three were married with children prior to surgery), and with opening a recovery center, and they speak about these struggles with absolute candor, to a camera that captures lively and intimate moments throughout.

After a successful festival run and airings on Showtime, Trinidad premieres on LOGO this Saturday, April 24, at 8pm. The DVD, which includes a conference lecture by Bowers, is available for purchase at www.trinidadthemovie.com.

The City of Angels, Air-Kissing Austin
Dispatch from the Los Angeles Film Festival