Stephanie Rothman directed a spate of exploitation films between 1967 and 1974 and then disappeared from the industry. Unlike other young directors such as Jonathan Demme, Martin Scorsese, Peter Bogdanovich, Jonathan Kaplan, Francis Ford Coppola, and scores more who got their starts in producer Roger Corman's low-budget academy of down-and-dirty filmmaking, Rothman never graduated into the big time. This is not because her films are lacking in quality or interest. In fact, a case could be made for Rothman being the most productive and consistently auteurist filmmaker in the exploitation stable. Her solo films – It's a Bikini World, The Student Nurses, The Velvet Vampire, Group Marriage, Terminal Island, and The Working Girls – are all solidly made and infused with feminist ideas and egalitarian impulses toward the depictions of sex, class, race, and government. Why was Rothman unable to film work outside the exploitation sphere, and why has she surfaced to present two films next Wednesday at the Alamo Drafthouse at the Ritz? We had an e-mail conversation with Rothman to explore these very topics.

Austin Chronicle: What was your background in filmmaking, and how did you first wind up making a movie for AIP [American International Pictures]?

Stephanie Rothman: I studied filmmaking as a graduate student at the University of Southern California's Dept. of Cinema. While there, I was the first woman to be awarded the Directors Guild of America Fellowship. Based on this award, Roger Corman hired me [in 1964] to be his assistant and put me to work on low-budget films he was personally financing, or films that he had bought completed but that still needed work. I did everything: wrote new scenes, scouted locations, cast actors, directed new sequences, and edited final cuts. Within a year, he financed my first feature film, which I co-wrote with my husband Charles Swartz and directed. It was called It's A Bikini World, the last of the beach pictures. AIP distributed it, but I was never employed by AIP, nor did I have any contact with the studio.

AC: What did you learn from working for Roger Corman?

SR: Roger was the only mentor I ever had. He encouraged me and gave me confidence in my work, for which I will always be grateful. He didn't teach me any technical skills, I learned those at USC, but he generously shared his extensive experience with me, and gave me useful criticism and information on how to efficiently organize work on a set so that a film could be shot on schedule. Since it was his money he was using, I had to shoot fast.

AC: Did you consciously seek to subvert the genre constraints of exploitation filmmaking? Some prominent examples: Your female characters are generally independent thinkers who act on their own choices. Your use of nudity is applied to male as well as female characters.

SR: In the beginning, I didn't even know that I was making exploitation films. I first learned the term when it was used in a review of The Student Nurses. I thought I was making low-budget genre films. But whatever I was making was called, it irritated me that many contemporary films, regardless of their budgets, were dishonest about everything from sexual politics to social conflict. Since I didn't know how long I would be able to work making any kind of film, I decided to say what I wanted while I had the chance, instead of playing it safe.

People have noted, as you did, that the women in my films are independent in thought and action. I think this stands out because of the limited, usually subordinate roles, that were written for them in that era. It was indeed my intention to change that in my films. I wanted to create – as in the real world I wanted to see – a more equal and just balance of power between the sexes. That is why in some scenes the men are nude as well as the women, which definitely was not the convention then. But I wanted the women's independence to extend far beyond that issue to a life filled with meaning and purpose beyond marriage. Some women lived such lives in the Seventies, but it was a more novel idea in life and films than it is today.

AC: Was there any struggle for you between the expression of your creative freedom and the constraints of exploitation filmmaking? Did you feel compromised? Did it allow you a certain freedom to do what you wanted as long as you hit your contractually agreed-upon marks?

SR: Working for Roger, and later for Dimension Pictures, the company in which my husband and I had a small ownership, I didn't always get to choose the subjects of the film, but I did have control over the attitude toward and the treatment of the subjects. In this respect, I didn't feel compromised or constrained. Of course there were certain audience expectations that had to be satisfied, in particular for nudity and violence. Since I was making exploitation films with unknown casts, I had to show more nudity than they could ordinarily see in major studio films, but less than in the soft porn that was then in release. Furthermore, I had to show up to the limit of what was allowed in an R-rated film (i.e., no pubic hair, no genitals, no simulated intercourse), which looks quite tame by today's standards, but wasn't at the time. Because of these scenes I also had to cast very attractive people, which meant that sometimes I couldn't cast the best actors, which I considered a very serious constraint then, and which continues to disturb me even now.

AC: Did you ever seek directing work on films that weren't exploitation-based, and what were those results?

SR: Yes, I did. I had good agents and together we tried very hard to get me work, but we repeatedly discovered I was stigmatized by the films I had made. The irony was that I made them in order to prove that I had the skills to make more ambitious films, but no one would give me the chance.

Then there was the other reason, the so-called elephant in the room: I was a woman. No one told me directly, but I often learned indirectly that this was the decisive reason why many producers wouldn't agree to meet me. If that sounds exaggerated, remember that I worked in the American film industry from 1965 to 1974, and some of those years I was the only woman directing feature films.

SR: For the next 10 years, I tried to find work making more ambitious films. My husband and I collaborated on a couple of challenging treatments and scripts that were well received, but never sold. I did sell a few options on scripts and screenplays on my own. I got a few offers to make more exploitation films, but I was never happy making them and I didn't want to repeat myself. After enduring a decade of barely making a living, I gave up.

AC: What have you been doing since then?

SR: For a few years I ran a small proto-union for a group of University of California professors, doing their lobbying and writing a political newsletter about labor issues of concern to them. Then, starting with a small inheritance, I began to invest in commercial real estate.

AC: If you were starting a career as a newcomer at the beginning of the 21st century, would you still choose to go into filmmaking and/or writing?

SR: I love this question! Yes, I definitely would, because the opportunities for getting one's work seen are much greater now. There are so many more festivals at which to show new films. Then there are the new digital technologies that give filmmakers at all budget levels greater control over their images, and finally there is the ever-improving and less costly equipment that is now available to low-budget filmmakers. But – most revolutionary of all – there is the Internet, where you can be your own distributor and seek your own audience directly. Whether you can make a living this way is still unproven, but I think that business models for doing this are evolving. I also think established companies in film and television, and major studio and independent distributors, are again seeking a way to gain some control over this, to become the gatekeepers they have always been. So, ultimately, I think the greatest never-ending challenge, for filmmakers and everyone else, will be how to keep the Internet a democratic forum.

Rothman will attend screenings of The Student Nurses at 9:40pm and Group Marriage at midnight on Wednesday, April 14 at the Alamo Drafthouse at the Ritz. 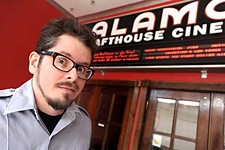 Any Given Wednesday
One man, 10 years, some seriously sublime weirdness