The Surreality of Reality

Sure, America's got talent, but does Dallas have the next chicken plucker?

Tweet
print
write a letter
His handlebar mustache jumped right out of Hee Haw's central casting – a bristly border for a big gap-toothed Texas grin. The crowd behind him roared: "America's got talent!"

Randy Harrison from New Berlin, Texas, flashed that gap and chewed some gum ... or chaw ... or a hayseed. With his starched white shirt, Kentucky Colonel tie, black Stetson, and leather waistcoat, he stood out – even in Dallas. "Whatcha gonna do today, Randy?" I asked, as if I had to. "I'm going to sing country music," he grinned. "I figure if a chicken plucker can do it, I can too, by golly!" cinching his Most Likely to Play Slim Pickens in the Biopic award.

The "chicken plucker" he meant is the winner of season four of NBC's America's Got Talent, Kentucky chicken catcher Kevin Skinner – a young man surely crossing the mind of every potential contestant packed in that Dallas Convention Center for the fifth season's open call this frigid January morn. Despite the gray and cold, thousands upon thousands came.

My friend Lisa Marshall is seriously vying for a slot on the show. She's a full-time musician, recently relocated to Austin from the West Coast. I was shocked but amused that she was trying out for AGT, and she invited me to tag along. We pulled into the parking garage just before 7am and followed the drift of groggy people through the maze of convention hallways. She went to get her armband and official contestant number and I to obtain press credentials. We met at a gigantic center staircase, where hundreds of folks were gathered. The sheer size of the crowd amassed for this cattle call hit us. "It's the California DMV," said Lisa.

The crowd control was to work folks into an early-morning lather, to "get us to hoot and holler 100 times all in a row," according to Lisa, "America's got talent!" for the show's commercial break bumpers and fill. Show host Nick Cannon was deep in the center of the happy throng, mugging and posing for the camera.

At 11am, we followed Harrison into a very large space, where we stood in a Disney World-esque queue for about 20 minutes. This queue, it turns out, was to process folks into the main holding area with about 1,000 other people. When hunger struck, you went to another line at concessions. "We are people waiting in line to be processed – processed people waiting in line for processed food and processed pop." Lisa was getting loopy.

What emerged from this strange pit of humanity was something I would have never anticipated – a Kerrville/Burning Man-y eruption of humans forming strange organic tribes. "People who didn't even know each other were congregating in little clusters," said Lisa, "auditioning for each other – part trying to work through some nerves and part cheering each other on."

Despite the feel-good vibe, by 2:45pm things were beginning to feel cruel and unusual. Only two groups of 150 had been called within the almost four hours we'd been there. After only two hours of sleep, the effect of the cattle call was beginning to moo.

By 3:30pm, Lisa's number was finally called, and we were herded into a smaller room of 500 people. The next call would be for her actual audition. The rest of us supporters would be left to wait. At about 3:45pm, Lisa grabbed her guitar and headed for the acoustics of the ladies room.

While I sat, a convincing and friendly Stevie Wonder impersonator named Jerome Dabney arrived with a small group. The other dude in his group also looked familiar. It was Big Chief Alfred Doucette from New Orleans. Suddenly I thought, "How are they going to stack this guy's years and life experience against folks simply walking in off the street, like every chicken plucker that came before?" They couldn't, and the day's mission of giving everyone their shot at their own personal 15 minutes came clear. I also began to worry for my friend. How was her voice? Her spirit? Had the day taken its toll?

I turned to see Lisa bounding back into the room, a wild fire in her eyes. "It's on!" she said. At 4:15pm her number was called. 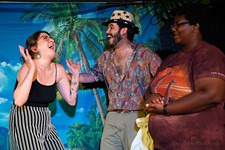 The Rose: Trouble in Paradise at ColdTowne Theatre
This improvised riff on The Bachelor captures the raw, trainwreck appeal of reality TV dating shows