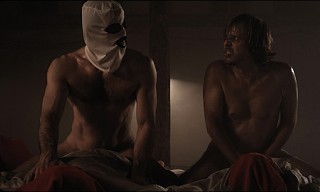 Stripped of its cultural context, this can seem like an sleazy exercise in graphically degrading sex, unconscionable violence, and exploitation for exploitation's stomach-churning sake. But forget Irréversible, forsake Martyrs, and forego Antichrist. A Serbian Film is a horrifying political allegory wrapped up in some of the most perturbing scenes ever caught on camera. Anyone going in expecting a gross-out horror will instead be simply disturbed. Its central themes - that a nation that underwent such war crimes with no real reckoning does not suddenly heal, and that a flawed good man can be remade as an irredeemable monster - are rightly sickening. It is unwatchable, but deliberately so, a cavalcade of human debasement and noxious, perverted violence meant only for those studying what war does to a culture. It is less a film and more a cathartic primal scream from a nation that endured and perpetrated untold atrocities. Self-defeating as it may well be, it is unbearable - but it's supposed to be.