Many attribute the discovery of the drug MDMA to Dr. Alexander "Sasha" Shulgin. But as Etienne Sauret's documentary Dirty Pictures shows, the chemist did not invent Ecstasy – just a use for the previously discarded compound. The film outlines Sasha and his wife Ann's controversial careers synthesizing and ingesting hallucinogens to better understand the nature of the mind. The film also features the work of Dr. David Nichols of Purdue University, perhaps the world's most renowned expert on LSD, as well as Sasha's unlikely friend, fellow chemist and retired DEA agent Robert Sager. The film approaches the subject matter honestly. It highlights why hallucinogens interest Sasha and his colleagues, as well as Sasha's disapproval of the popularization of MDMA as "Ecstasy": a recreational rave drug. Through cataloging the Shulgins' life together, Sauret initiates a conversation about the war on drugs, the potential for life after death, and what it means to be human. 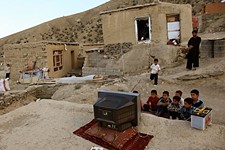