Lovers of Hate, Austin filmmaker Bryan Poyser's third feature film, isn't a comedy any more than his debut film, 2004's Dear Pillow was, but both movies – and indeed all of Poyser's body of work so far – elicit intimate, often cringe-based laughter from audiences. Which is fine with the director. Comedy, as some wag once said, isn't pretty. In Lovers of Hate, it evolves around the borderline creepy edges of obsession, emotional devastation, and the barren, rocky coastline of the human heart.

That's the most challenging kind of humor for a filmmaker to attempt because it relies on the audience to not only recognize a kinship with often desperate, damaged characters living less than laudable lives but also empathize with the worst in people. Poyser's characters more often than not reach for the gold ring only to realize that they've already pawned it. But then, perhaps, if they search their souls hard enough, they'll find that crumpled, dirty claim ticket still there, ready and waiting for redemption.

Shot almost entirely within the confines of Austin Film Society board member Deborah Green's labyrinthine Park City, Utah, mansion – the site of the society's annual Sundance Film Festival parties and the Austin film community's unofficial Utah headquarters – Lovers of Hate follows the sideways spiral of the woeful Rudy (Chris Doubek), a failed writer recently separated from his wife, Diana (Heather Kafka), who's had all the Rudy she can take and ends up falling for Paul (Alex Karpovsky), Rudy's sibling rival, a successful writer of children's books. Extremely awkward quasi-hilarity (and no small amount of self-loathing from virtually the entire, uniformly excellent cast) ensues.

The Austin Chronicle sat down with Poyser to discuss his film's just-announced Sundance sale to the Independent Film Channel and the challenges of exploring the darker reaches of the human heart for the humor inherent in the naked truth.

Austin Chronicle: So what's the story on the IFC sale? Congratulations are in order.

Bryan Poyser: Thanks. Essentially they're going to do the same thing they did at the last South by Southwest with Joe Swanberg's movie Alexander the Last, where it premieres at South by Southwest and then it's released on video on demand day-of or the next day for a limited time. It's definitely exciting. It's the first movie I've ever made that's made a dime, which is wonderful. And although it's not a big sale, we knew we didn't really need a big sale to make our money back. Because we got into Sundance, we're part of that Sundance "brand," and now we're going to be part of the IFC brand, which is also really great. The way most people see independent films these days is at home, anyway, so IFC's VOD strategy makes perfect sense.

AC: Lovers of Hate is – I think – a comedy, but the humor in it is so dark and so spiteful – so human, in other words – that I'm wondering how you describe the film to people who ask you the eternal question: "What's it about?" 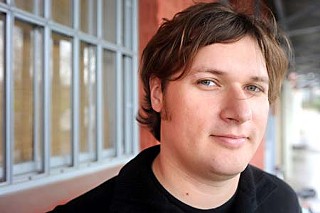 BP: If I were trying to get people to come see it, I would say that it's a comedy, because the first way to not get people to be interested in your movie is to say, "It's a drama!" That immediately elicits snores from most people. So, yes, it's a comedy, but to me it's comedy that is born out of an uncomfortable, rather terrible situation. I think we've all had relationships in the past where things didn't work out the way you wanted them to. In writing the movie, I was thinking, "What if you could witness the love affair that happens right after you with the person that you were in love with?" If you could see what happens, would you?

AC: You can do that now thanks to Facebook.

BP: Yeah, right? It all feeds into this obsessive, almost masochistic need to know. Why doesn't [the character of Rudy] just leave? It's horrible what he's doing to himself, but I think a lot of people, if given that situation, as horrible as it would be, would want to see what would happen and what their ex would say about them.

AC: It's a bit like slowing down to watch your own car crash.

BP: Right. And while that is a horrible concept, it was something that I wanted to explore. And I think it's easier to explore it if comedy is involved. Comedy helps people get on board with the darker stuff.

It was very important to me to make Rudy a character who never does anything too crazy that quite takes him beyond the point of relatability. That might make it more of a genre movie and therefore easier to sell or market, but I just didn't want to do that. I wanted to play with the tension of "Oh my god, what is he going to do next?" and play with it through comedy. But it's a very specific, uncomfortable, squirmy kind of comedy.

AC: Chris Doubek is painfully believable as Rudy. You've worked with him before, but why, specifically, did you cast him here?

BP: For one thing, he's a very gifted physical actor because he's been trained in the theatre, where your whole body is your instrument. He can engage his entire body in the scene, whereas a lot of film actors are unused to that kind of full-body expression. The character of Rudy really doesn't have very many lines, particularly in the last two-thirds of the film, so we're relying on his physical presence for a lot of the comedy and as a means of expressing what's going on in Rudy's head. Chris is kind of heroic to me, because he's figured out a way to make his life be totally about acting. He doesn't accrue anything else that would make that not possible. He doesn't have any responsibilities, he lives in a tiny little apartment that he's lived in for years, he works as a substitute teacher for AISD, he's not married, he doesn't have a kid, and he's barely got a car. He's just there and ready to act.

AC: Which is kind of similar to the character of Rudy.

BP: Yeah, Rudy is in his own way very resourceful. In the movie, we see him at the lowest point in his life. It's abject. But he doesn't just sit around and mope about it, he does something about it. What he does is not necessarily healthy or positive or what he should do, but at the same time he's someone who's not just going to sit around. He's going to exact his twisted revenge and do whatever damage is necessary to make it happen.

AC: The character of Rudy almost comes off as a ghost haunting both his own life and that of his ex-wife, Diana.

BP: Yeah, he's passive in that he's hiding, but he's active in the shadows. And that was definitely intentional in the last third of the film where we, as the audience, don't even know where he is. There's a sense of him being this invisible hand manipulating the events but also second-guessing what Diana and Paul's reactions are going to be and trying to orchestrate his revenge. There's a sense, at the end, of the characters not necessarily achieving redemption but of at least getting to the point where they can reflect on their actions and maybe have a chance to redeem themselves in some way.

AC: Are the characters of Rudy, Diana, and Paul drawn from people you know in real life? Because onscreen they come across as instantly familiar, albeit in a warped sort of way.

BP: They all definitely portray certain aspects of me, although it's not autobiographical, thank God. But parts of it are drawn from things that I've done or things that I've thought about doing and then thought better of doing. In writing the three characters, I definitely wanted them to be relatable to me and therefore relatable to the audience. I wanted them all to push the edge of likability. In movies and television, there's an obsession with trying to make characters likable. For me, likable is not as important as watchable.

AC: Your first feature, Dear Pillow, and Lovers of Hate have a certain intensity of longing for unsullied human connection. Is there a Bryan Poyser aesthetic that's emerging here?

BP: I guess I'm interested in making movies about writers or creative people, but I'm also very wary of that because I never want to make angst-filled movies about unsung creative geniuses. That to me is boring. I'm more interested in what underlies the creative impulse. The movies that I've done are all about characters who either strive for or avoid getting to some kind of truth in their lives.