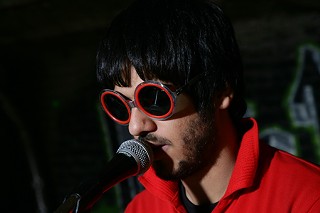 To put it mildly, now is not a good time to be an artist of conscience in Iran. The massive, spontaneous, and deadly street protests that erupted across the country in the bloody wake of the disputed presidential elections of June 12, 2009, continue to echo chaotically across the entire Middle East region. The immediate crackdown on those artists who supported Mir Hossein Mousavi's "green revolution" against incumbent Mahmoud Ahmadinejad has, nine months on, morphed into a more subtle and protracted series of raids, illegal detentions, and worse.

On March 1, legendary Iranian director Jafar Panahi (The Circle, Crimson Gold) was arrested at his home, along with family members who have since been released. Panahi, despite conflicting reports, appears to still be detained, along with fellow filmmaker Mohammad Rasoulof. For celebrated Iranian filmmaker Bahman Ghobadi (A Time for Drunken Horses, Turtles Can Fly), whose narrative feature No One Knows About Persian Cats will screen as part of SXSW Film, the raids are particularly troubling.

Persian Cats explores Tehran's officially banned underground music scene in vivid, cinema verité style, utilizing real musicians (every genre from metal to hip-hop to aching indie-pop is represented) and was clandestinely shot in basements, back-alley dives, and on the tumultuous streets with zero official approval. Which makes Ghobadi, currently in Iraq, something of a filmmaker-refugee. Returning to his country any time soon means almost certain imprisonment. But his film, unsurprisingly, transcends political borders: It follows musical duo Negar and Ashkan (Negar Shaghaghi, Ashkan Koshanejad) as they scheme to leave Tehran behind in hope of making a new home for their band in the UK. But first, there's that one final gig to reckon with.

Reached via e-mail (cell phone and satellite phone service to Iraq proved nonexistent over the recent election weekend), Ghobadi had plenty to say, particularly regarding his occasional run-ins with the state:

"As a filmmaker, my conditions as an artist are more difficult than for a non-artist. Whatever happens, I become very emotional and it bothers me a lot. After the Cannes Festival, in early June, I wanted to go back to Iran, I wanted to go by land. My friends told me not to come by plane. I was jailed, and 2 days before the election, with 'threats and respect,' they brought me back toward the border, from the place I had entered, so that I wouldn't enter again. From 7-8 years ago until now, the Intelligence Ministry summoned me, and in all the meetings, they warned me that it's better I leave Iran if I continue to do media interviews or speak out."

Since the June elections, says Ghobadi, the situation for artists "has become much worse, the restrictions have become much greater. Now the Basij have hired many more people to have even more control [over society]. They have closed most of the underground music studios. A large number of underground artists, not only in music but in many areas of art, have been arrested – their names are seldom known – they have had their houses raided and their works confiscated.

"And also, Jafar Panahi wanted to make a short film in his home, and all of his equipment, scenarios and information about his film that was in his computer were confiscated. Jafar Panahi has an international name, but there are many others whom we unfortunately have no news about. They (the authorities) want to create fear among the people, and it is with this fear that they have been able to rule the country for 31 years.

"I am in Kurdistan, Iraq, today, and my Kurdish friends here speak in a way that I must also be afraid of that government, even though I'm in another country. I don't know, what does this mean?"

As for the continued existence of non-state-supported art – of any kind – in today's Iran and his place within (or without) it, the filmmaker is both philosophical and revolutionary. It's a combo that, at the very least, offers hope for the future.

"I believe the society and geography and the native land of any country gives birth to artists. When I look back on my life, and I think that if I'm to serve humanity as an artist, the places where I must serve more, I must go and serve. When I look, I see Iran and the Kurds are more needy than other places. I don't want to separate myself from them. I want to make films for them. I now go to Kurdistan Iraq a lot, and I see myself as having a responsibility for building the new generation. As many other artists [do], I feel a responsibility toward my society."

Bahman Ghobadi, No One Knows About Persian Cats, Jafar Panahi, Mohammad Rasoulof, A Time for Drunken Horses, Turtles Can Fly