Gilbert Shelton on his iconic comic's long, strange trip to the screen 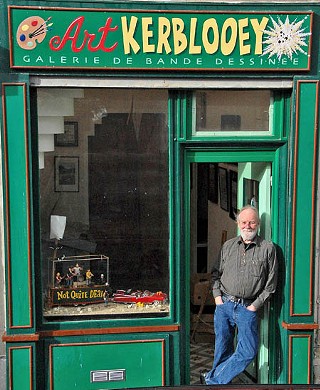 If it's fair to posit that the Austin Music Scene, referred to so reverentially it practically demands capital letters, started first with Kenneth Threadgill, then Austin's artistic underground origin in the Sixties can likewise be attributed to Jack Jackson, Jim Franklin, and Gilbert Shelton. Their pen-and-ink contributions to the comic-and-poster world gave Austin its earliest visual identity in the counterculture. Five decades later, one of Shelton's visions is headed to the big screen.

It was an artistic trifecta for which only Austin could be the Texas setting. The very act of being away from home and attending school at the University of Texas offered creative freedom amid higher education, the same way Threadgill's and later Johnny Holmes' venue, the Victory Grill, encouraged the exchange of musical styles and ideas.

In 1964, Jackson (aka Jaxon) reimagined the comic book with God Nose, the first of the newly christened genre of underground comics. Franklin's sly, more mannered style (as compared to Jaxon's inky panels) featured armadillos as motifs, an odd choice of critter that would one day symbolize to the world Austin's rebellious streak. Then came Shelton and the Fabulous Furry Freak Brothers. 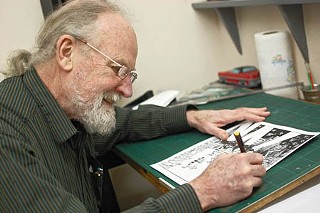 Shelton puts the finishing touches on his illustration for this week's Chronicle cover. (Photo by Taylor Holland)

Actually, first came Shelton and Wonder Wart-Hog, the clumsy, porcine superhero send-up of Superman who first appeared in 1962 in UT publications Bacchanal and The Texas Ranger and whose adventures were later serialized in college and underground newspapers. Shelton also gave Austin's Oat Willie's head shop its bony figurehead in polka-dot shorts. Yet it was the Fabulous Furry Freak Brothers' appearance in 1969 that caught fire in the imagination of America's youth, who now had their own version of comic books to relax and read while toking and rocking out.

Freewheelin' Franklin, Phineas, and Fat Freddy symbolized the pot culture of the Sixties, their free-spirited lifestyle in pursuit of sex, drugs, and rock & roll the model for a generation that broke more molds than any before or since. Their hairy appearances and attitudes were summed up in one philosophy: "Dope will get you through times of no money better than money will get you through times of no dope."

It was a potent anti-establishment mantra that sold about 40 million comic books in 15 languages and is still chanted by the faithful. The Freak Brothers were such a hit that even the appearance of Fat Freddy's Cat attracted fans, and the cat, whose panels started appearing on the bottom of the comic pages, soon got his own comic. But the Freak Brothers were Sixties hippies in the Seventies, anachronistic by the New Wave Eighties, relics by the Gen X Nineties, and ancient history by the Aughties. What was left but for them to become retro cool?

"We never expected them to stay popular," says Gilbert Shelton, the Cheshire grin on his face almost audible as he speaks on the phone from France, where he resides with his wife. "Maybe they were just easy to read. At the time, the daily newspapers wouldn't touch certain subjects, so weeklies sprung up, some leftist. Before the Chronicle, there was The Rag, and I was in sympathy with these weekly newspapers, but they were godawful dull. I thought what they needed was a comic strip to improve readership. So that's the reason I started the Freak Brothers."

"I drew a lot for Shiva's Headband and Conqueroo and other acts at the Vulcan. By the time the Armadillo came along [in 1970], I was gone and Jim Franklin took over the poster scene. Everyone was crazy about Jim.

"The Elevators were coming up just as I was leaving Austin. I think I only heard them one time at the New Orleans Club, but they'd just been busted and had all their hair cut off. They didn't dress like hippies; they dressed like Austin teenagers. They took that look out to San Francisco, and this disappointed the San Francisco audiences who wanted to see flashy hippies or even cowboys like Doug Sahm. And here were these ordinary-looking and -dressing kids. The music was very good, though."

Shelton points out the early setting for the Freak Brothers was identifiably Austin until he moved to New York and then San Francisco. Local lore persists that the three personalities were based on real scenesters of the day. Shelton insists they weren't actually inspired by any one person, though he concedes that the likely candidate for Fat Freddy, Charlie Pritchard of the band Conqueroo, "did have the great hair," and Freewheelin' Franklin model Joe Brown "was in the movie we made, the Texas Hippies March on the Capitol, which was lost. I loaned my copy to Bill Brammer [author of The Gay Place], and he lost it. And Wally Stopher dressed up like Oat Willie once. 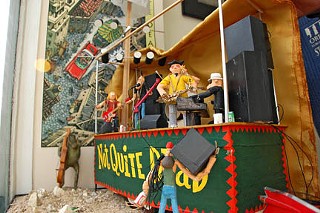 "Not Quite Dead" diorama (Photo by Taylor Holland)

"Last time Wonder Wart-Hog appeared was Zap Comix number 15, a few years ago. I don't do much Wonder Wart-Hog anymore. He's always been a hard character to describe. All fictional characters are biographical at heart, so maybe it's the warthog in myself."

Getting Down to Grass Roots

So what's taken the boys so long to get to Hollywood? Wasn't it ripe for other times, like when Robert Crumb's Fritz the Cat was made into a film in 1972?

"This is actually the seventh or eighth film project," Shelton laughs; clearly, he has long found humor in this topic. "Nothing ever got made before. The first people with the option to make the Freak Brothers were Universal. It sat for six years and nothing happened, so the rights reverted back to me. That happened over and over again."

What was so hard about making a movie about three guys smoking pot? 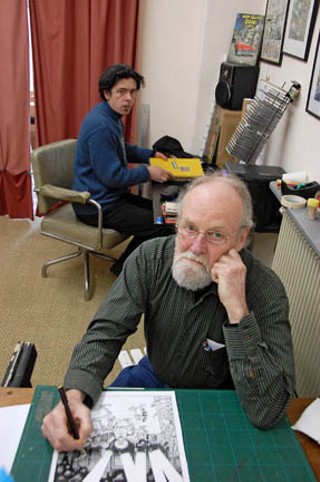 Shelton(front) in his studio with "Not Quite Dead" comix conspirator and all-around Frenchman Denis "Pic" Lelièvre. (Photo by Taylor Holland)

"There might have been some ambivalence in Hollywood. And, as Universal pointed out, only one out of about 20 projects ever gets made. Maybe I was better off selling it over and over again. The people who have it now have confidence they're going to finish it."

The "people" are the British team bolexbrothers, who have had The Fabulous Furry Freak Brothers project titled Grass Roots since 2003. Their feature-length stop-motion animation film is billed as "a cannabis conspiracy comedy caper." So far, so good, judging by the trailer on YouTube, but Freak Brothers fans only want to know one thing.

"No, they haven't cast the voices. They were going to ask Jack Nicholson to do Fat Freddy's Cat, but they want big names who will do it cheap, and they probably can't afford him. That's up to them – I'm not into that end of the business. Still, it's only a couple days' work."

Ain't It Cool News' Harry Knowles, who will interview Shelton about Grass Roots at the South by Southwest Film Conference, is himself a longtime fan. "As a child of hippies, I was reading Shelton at 6, 7, 8, 12. I loved The 40-Year-Old Hippie, and Wonder Wart-Hog was the funniest superhero parody ever made. Potheads had Cheech and Chong, but the funniest drug humor was in the Freak Brothers. They were everyone who ever lit up, and if you weren't one of them, you knew them. 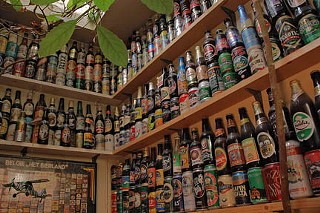 "They have not been updated, thank God – they still have their ratty house! While I would have loved to see Shelton keep coming out with stories of them, they stayed in a certain time period, and that culture is as much a part of the Seventies as anything that Scorsese or Lucas or any of those guys did."

Today, Gilbert Shelton divides his time between Paris and a country place in Burgundy. He's involved with the Grass Roots project and his Not Quite Dead comic, but Shelton cops to being "out of it musically. I like the Fifties rhythm & blues and bebop, country & western from the Forties and Fifties." His upcoming visit to Austin includes a booksigning, an art exhibit at the South Austin Museum of Popular Culture, and the interview with Knowles at SXSW Film.

"What I have collected for the museum exhibit is the Freak Brothers, Wonder Wart-Hog, Fat Freddy's Cat, and my rock music cartoon Not Quite Dead," Shelton paused, musing over the iconic images he's created throughout the years.

The South Austin Museum of Popular Culture will host a Gilbert Shelton exhibit March 13-May 8. Shelton will be present at the opening reception March 13. For more information, visit www.samopc.org.

A Conversation With Gilbert Shelton