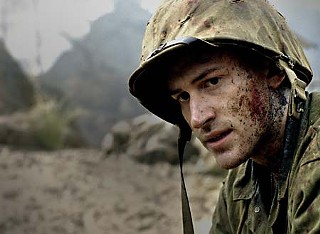 One of the spring's programming highlights is HBO's new miniseries The Pacific, from the same creative team behind Band of Brothers.

I have to admit, the opening sequence of Jay Leno's first night back as host of The Tonight Show was funny. Shot in black and white, Leno was lying on his back in a barn, as in the scene in The Wizard of Oz when Dorothy wakes from her Technicolor dream and declares that there's no place like home. I wasn't surprised by the frenzied response of the studio audience when Leno took the stage, though I was taken aback earlier in the day by a TV critic on NPR urging the end to Leno-hating. Leno's been fielding a lot of potshots, mostly from other late-night TV hosts. If there's anyone to despise, the critic insisted, it's the NBC suits who created this debacle – dropping Leno into prime time and seeding Conan O'Brien as The Tonight Show host, only to unceremoniously dump O'Brien and reposition Leno when his move to prime time proved to be a ratings disaster. Classy.

So, as I was watching Leno, mildly smiling at all the things that make Leno, well, Leno, I couldn't help but think, "Yes – all is right with the world." Now I can go back to what I was always doing from 10 to 11pm: watching The Daily Show With Jon Stewart and The Colbert Report.

Many networks, in addition to NBC, were holding off on premiering or continuing their series to avoid competing with NBC's coverage of the Olympic Games. They finally ended last week. Here's what's been in the holding pen:

The Pacific (March 14, 8pm, HBO): This miniseries based on the true stories of World War II Marines continues through May 16 and has enormous buzz behind it (it's from the same people behind Band of Brothers). I patiently await my review copy.

The Celebrity Apprentice (March 14, 8pm, CBS): Ousted Illinois Gov. Rod Blagojevich is a contestant. More proof that all those bizarre predictions made in Network are coming true. Sigh. Other contestants include Cyndi Lauper (double sigh) and Sinbad.

Justified (March 16, 9pm, FX): Timothy Olyphant (Deadwood) stars as a U.S. marshal with a gloomy past, sent to bring law and order to the one place where he vowed never to return: home. Based on a character created by crime novelist Elmore Leonard.

Breaking Bad (March 21, 9pm, AMC): Tension continues to mount between Walt and Jesse (Bryan Cranston and Aaron Paul), and a newcomer exacerbates the friction. Bob Odenkirk fans will be pleased to learn that he becomes a series regular this season as Saul, a lawyer with questionable practices. The first two seasons of Breaking Bad will be released on DVD and Blu-ray March 16.

V (March 30, 9pm, ABC): After teasing us with a scant four episodes last fall, the series about some very attractive aliens who come to Earth with evil on their agendas finally comes back to pick up where it left off.

Glee (Fox): Sorry, you'll have to wait till April 13 for the return of this breakout hit, and all that's in store should keep fans and the curious on the edge of their seats with anticipation. Look at these highlights: an all-Madonna episode, a Joss Whedon-directed episode, and appearances by Idina Menzel, Kristin Chenoweth, and Neil Patrick Harris. The wait is excruciating.