Time flies. Not counting their one-off, what-the-hell-why-not? gig three years back, it's been a full 13 years since the amicable breakup of pioneering Austin ska outfit Gals Panic. In the interim, guitarist Jerm Pollet formed Mr. Sinus Theater before moving back to his homeborough Brooklyn, while bassist Cardinal Connor, drummer Steve Austin, and manic frontman Lance "Fever" Myers briefly formed Playdoh Squad before heading their separate ways. Austin's ska-pit just hasn't been the same since. That is, until this Saturday, when Gals Panic will once again create havoc and hilarity at Emo's.

"We've got what I call the 'golden years' lineup back together," Myers tells me over coffee and cacophony at Spider House Cafe. And the reason for this second sainted reunion of ska gods? A benefit for Myers, who, as a longtime Austin animator (A Scanner Darkly, SuperDeluxe.com's The Ted Zone, and our all-time favorite, "The Astronomer"), has undertaken the most ambitious, independently produced (read: self-funded), traditional 2-D animated project of his career with "Boxer Story."

"This has some funny, off-the-wall stuff in it," explains Myers of the projected 30-minutes-plus "Boxer Story," "but it's more about creating a work of art that I can be really, really proud of. Ted Zone was a different thing altogether. I had to complete a full five-minute episode from start to finish in eight weeks, which is not a lot of time when you're doing animation. I'm proud of the work I did on that, certainly, but when you're working on deadlines, corners get cut. With 'Boxer Story,' I'm going back to the really grueling, no shortcuts, drawing every frame, real deal. And I'm using some of the best voice talent in Austin and actually doing full read-throughs instead of just handing someone a script and saying, 'Go to it!'"

Myers is understandably reluctant at this point to give out a fully fleshed synopsis of his dream project, but suffice it to say it involves lots of blood, sweat, and fisticuffs. An homage to everything from Rocky to Raging Bull to Ali, "the idea is to play around with the conventions inherent in every boxing film," says the animator.

"It's a dark comedy, but there is the very serious theme of chasing your dream. It's about a young, talented, down-and-out boxer who really wants a shot at the title, with a twist." 'Nuff said. Go get 'em, champ. 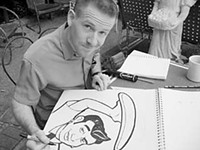 Hurry Up and Animate
A closer look at the Riddlin' Kids look, courtesy of local animator Lance Myers