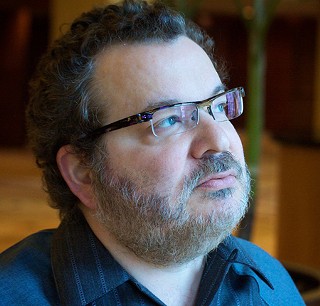 'Z' Is for Zombie

And zombies, as you're very well aware, are a cultural meme whose time came, flourished, and now fades from the zeitgeist's inconstant focus, its multimedia overexposure dispatching the living-dead novelty more surely than a chain saw to the brain. Yes, even a custom-modded, diamond-studded Husqvarna 359 chain saw to the brain.

'P' Is for Publishing

And publishing, as you've heard, is dying as surely as a zombie whose brain has been redefined by a custom-modded, diamond-studded (etc.) chain saw. Its time came, flourished, and is now fading. At least, that's supposed to be true for traditional publishing, what's also technofetishistically derided as dead-tree media: the print-emblazoned hard copies of such artifacts as books, magazines, pamphlets, even – cough, cough – alt-weekly newspapers. Supposed to be true, you see. Looking to the future, and all. But:

'Z' Is Also for Zeldman

And that is Happy Cog Studios' Jeffrey Zeldman, founder of A List Apart (the influential webzine for people who make websites) and co-founder of the Web Standards Project (which promotes the digital architecture that keeps the Web from becoming so many scattered towers of Babel). Zeldman's bread and butter is Web-based, in other words: by the Web, for the Web, through the Web, across the Web. Supply your own preposition – it's all about the ever-lovin' Web. So you might think Zeldman would be a, well, happy cog in whatever chain saw is putatively putting the shambling corpse of print media in the grave. But you'd be wrong.

"The printed word will be around long after many of our digital creations are gone," Zeldman says, "either because books don't require monthly hosting and blogs and websites do ... or because the languages and platforms for which a particular digital creation was published will become obsolete." And that's not even getting sentimental; that's dealing with the stark pragmatics of the situation. So if purely physical reasons will ensure that print's not going to die, the best thing to do – follow the logic – is to make it healthier, right? And the lessons of the Web itself may provide just the medicine required.

"Mandy and I are about to launch a printed book series, called A Book Apart, which derives much of its thinking and some of its formatting from what we've learned about PDFs in the past 10 years," says Zeldman. The Mandy he mentions is Mandy Brown, creative director of Etsy and former creative director at W.W. Norton & Co.; she's also one of the people speaking on the New Publishing and Web Content panel that Zeldman's organizing for this year's Interactive Fest, along with Happy Cog's Erin Kissane, Harper's Magazine editor (and Harper's website creator) Paul Ford, and Lisa Holton, founder of new-media company Fourth Story Media.

"Everyone on the panel is committed to the digital future," Zeldman says. "But we are also all committed to the book." And how will their – how will our – relationships to books change, and how will those relationships remain the same, as the digitization of printed matter proceeds faster than most chain saws can spin? "How," asks Zeldman, "can we be truthful and wise as editors, publishers, writers, journalists, and marketers straddling this scary yet exhilarating new divide?"

The Happy Cog honcho's panel aims to discuss those questions and others. Some of the answers may already be familiar, and some may be found at the crossroads of the physical and the digital, where the printed page and the interactive Web inform each other to the richness of all. And can't the value of books also be enhanced by making their less-easily-duplicated-than-pixels selves a selling point, by making each instance of a text (literary, commemorative, instructional) more distinct – via manipulation of paper texture, variant design, unique packaging? By increasing their basic artifactness? And isn't the tactile heft of a dead-tree tome, the static, immutability of print itself – when not carrying urgent, 24/7 news updates – already sufficient unto the day? Or, for that matter, the night?

"I spent all day in front of a digital screen," Zeldman says, having attended to the various arms of his canny corporate octopus, having updated the blog he's kept fresh since starting it in 1995, "but I'm about to curl up with a book."

ZPZ, maybe that's what old-school print media – not killed, but, instead, enhanced by new technology, made leaner but still very much alive – has after all: Zombie Potential Zero. Because it's not so much about the brains of the culture (which the Web handles more efficiently) as it is about the deeper, sloppier, more ancient beating of the human heart.