Mediamakers consider what happens when traditional media meets its maker 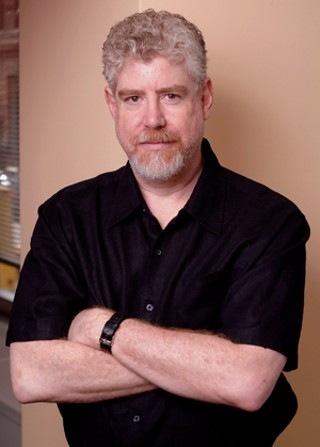 What you're currently reading used to have a few different names –information or journalism, for starters. Now, thanks in part to the infinite boundaries of the Internet splintering attention spans and advertising opportunities into an equally infinite number of niches, segments, and microgroups, a more apt definition is "content" –as evocative and descriptive a term as, say, what's filling your kitty litter box.

Countless amounts of ink, pixels, and broadcast hours have been spent dwelling on the death of traditional media outlets – so much, in fact, that one wonders if these companies spent half as much time innovating as they did blaming declining revenues on Craigslist or Google News or daydreaming in vain about the latest industry-saving proprietary product from Apple, how drastically different their dim futures might be at present. And sure, prophesying about the death of the media has been a favorite pastime of the institution's self-appointed gatekeepers ever since they fretted over Gutenberg's movable type letting in all the rabble. But it really does seem worse. Case in point: this year's Interactive panel positing the death of one of our most storied print institutions, called Media Armageddon: What Happens When The New York Times Dies.

Naturally, that panel organizer is one of the parties responsible for the Gray Lady's demise, a single revenue-generating clickthrough at a time. It's Blogads founder Henry Copeland, who, through his innovative advertising strategies, has enabled the blogosphere to flourish, setting the daily subscription cost at free along the way. "Yes, blogs and Blogads are part of the problem, but we're guilty only in the sense that a single drop of water helped to sink the Titanic," Copeland writes in an e-mail. "When I started Blogads in 2002, I wrote something that I think is still true today. It was hyperbole then, but is just plain fact today: 'As an information processor, the blogosphere superfluizes old media's expensive and carefully constructed infrastructures and franchises. Suddenly, Vivendi, AOL-Time Warner, EMAP and Newscorp are factories whose economies of scale are swamped by infinity, networks that have come unplugged, refrigerator salesmen trudging into the next ice age.' Since then, of course, we've seen Youtube, Ning, Twitter and a hundred other social media volcanoes explode. (Enough metaphors for you?) The amount of content is expanding exponentially and the ad dollars aren't."

But what will the media landscape resemble when institutions like the Times –that, with blogs linking to and expanding upon hard reporting, essentially form the backbone of the blogosphere –fail, and there's nothing there to replace it? Media critic and Advertising Age columnist Bob Garfield has a name for just this occurrence (and a book of the same name, not coincidentally): the chaos scenario. "The chaos scenario is the period falling between the end of mass media and mass marketing, and the ability for the microworld" –the realm of peer-generated and user-generated content –"to replace what we've lost." While this brave new world gives us entertainment in ways "we could never have imagined even 10 years ago," says Garfield, it also takes away "the ability for marketers to market to large numbers of people, and with that, high production value content. They go away."

For all the talk about the death of newspapers, Garfield is equally as bullish on the collapse of television. "For the last 15 years, audiences have been shrinking, but ad rates on a cost-per-thousand basis have been going up, because it's like last-chance gas for the mass audience. Audiences are getting so small, but ironically the networks could charge more and more for less and less, because marketers had no access to mass markets in any other medium. But finally last year, the prices started to go down. And they will continue to go down, because there is an absolute glut of advertising supply across all media worldwide." This, coupled with DVR-enabled ad avoidance and the proliferation of free content online (both user-generated and institution-generated, à la Hulu), forms a perfect storm, says Garfield, who also co-hosts NPR's On the Media. "They're being buffeted by four forces at once, and each on its own could kill them. All together, they're insurmountable, so no, I see no future whatsoever for broadcast television" – and thanks to the same forces, "cable isn't in a much better position," he adds.

"This is why I am just a parasite feeding on the bloated corpse of several industries," Garfield says. "I myself have zero chance of ending my career at Advertising Age, I tell you right now, because we don't have a sustainable business model either. I make a living criticizing TV commercials at a print publication. How fucked am I?"

About as much as the rest of us, it seems – so what can be done? Andrew Huff, editor and publisher of the Chicago-centric website Gapers Block, will be asking these questions in his panel, The Online News of Tomorrow. Gapers Block could be construed as an example of "hyperlocal" journalism –writing and reporting focused on individual cities, or even neighborhoods –but covering all of Chicago and "anywhere accessible by the CTA," they have a lot of ground to cover.

"With newspapers drastically cutting staff, there's a lot of news that goes unreported these days," Huff e-mails us of the rise of local, geographically centered sites. "And really, most of the dailies abandoned neighborhood-level reporting back in the '80s and '90s, so that's not a new problem." And with barriers to entry collapsed, "anyone can become a journalist for whatever beat they'd like to cover, be it the five-block radius around their house or the knitting scene in town or whatever."

But is it feasible to expect "anyone" to become a journalist? Isn't there something to be said for reporting as a full-time profession? As the only full-time staffer, Huff is the only one at Gapers Block drawing a full-time salary; an eight-person editorial staff draws "a small amount," but volunteers round out the rest of the staff. Still, Huff says "I don't think blogs and online news are killing salaried reporting. The mounds of debt media companies took on in recent years, and staff and budget cuts in the pursuit of 20 percent profit margins for shareholders – an outlandishly high margin compared to just about any other industry – are what [is] killing salaried reporting."

So are we any closer to knowing what the media landscape of tomorrow looks like? Copeland isn't exactly sold on the idea of nonprofit journalism. "Newspapers have evolved as part of an economic ecosystem. The drive to thrive – by winning readers, subscribers, advertisers – leads to innovation and constant refinement of the product. Without a bottom line, we may end up with lots of meandering exposés that don't really expose anything."

Huff foresees a more collaborative model: "There's a great line popularized by [journalist] Jeff Jarvis, who is also on my panel: 'Cover what you do best; link to the rest.' If the mainstream media could wean themselves off the notion that they have to do their own version of every story that comes down the line, and instead simply take a note from the blogs and link to the original or the best version, they'd find that not only would they be more able to concentrate on what they can do well, but they'll be more valued by their readers for it."

But where will the money come from to keep the whole enterprise afloat? The forthcoming paywall around The New York Times content is destined to fail if all it does is restrict content, Copeland argued in a recent blog entry on Blogads.com. It could succeed, Copeland says, if instead of a paywall, it was a "velvet rope" where users get to interact with the Times staff, "letting the readership itself become a partner and part of the value-proposition."

"I don't much see a solution," Garfield concludes. "The only way to do it is to get consumers to pony up. And that means creating a vast infrastructure for micropayments" –à la carte purchase of individual media items –"that will not happen in my lifetime. And that's chaos, because it's conceivable that eventually everything you do will be charged against your central media account or whatever, but there's no one stepping up to the plate to build that out."

If South by Southwest is truly where tomorrow happens, then we need it to happen, stat.

The Online News of Tomorrow
Sunday, March 14, 11am, Hilton F