'The Overbrook Brothers' premieres on IFC on Demand 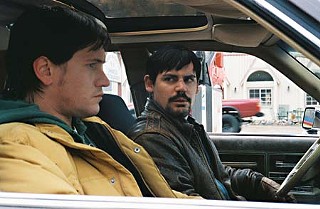 Austin filmmaker John Bryant's first feature, The Overbrook Brothers – about a pair of warring brothers on a road trip – has logged some serious road miles of its own, hitting festivals in Seattle, Woodstock, London, and Minneapolis, to name a few. The Chronicle spoke with Bryant about the origins of The Overbrook Brothers last March, when his well-liked comedy world-premiered at SXSW '09:

"The first seed of it all came from when [co-writer] Jason Foxworth and I were driving through the desert in Palm Springs and talking about our families. We decided we should do a family-type story, and I had an idea that came from something that happened to me when I was 4 years old: My brother had convinced me that I was adopted. I was crying, and I remember my mom was trying to console me, but my dad was across the room laughing. He thought it was funny, but, I mean, I was traumatized by the whole thing. So Jason and I thought, well, what if we took that idea, this dynamic, but made the brothers as being in a state of complete arrested development in their 30s?"

The Overbrook Brothers is now available on IFC on Demand. For more information, visit www.ifcfilms.com/in-theaters-on-demand.