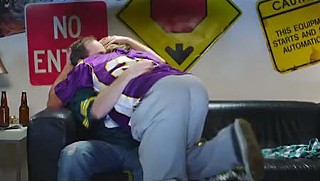 Sending mixed signals about its policy on "advocacy" ads, CBS nixed this commercial for gay dating site ManCrunch.com but OK'd an anti-abortion spot from Christian conservative group Focus on the Family.

When I first heard the grumblings over the Tim Tebow/anti-abortion spots that would run during the Super Bowl this Sunday, my first response was, commercials? Who watches commercials? But of course, this is the Super Bowl. Watching Super Bowl commercials has become a strange rite – an addendum to the main event, like red carpet preshows prior to the awards shows themselves, where a marginally talented interviewer asks inane questions of the assembled celebrities, punctuating the vacant chitchat with the inevitable, "Who are you wearing?"

For those still not in the know about the Tebow hubbub, the story is this: Pam Tebow, mother of University of Florida quarterback Tim Tebow, tells her anti-abortion story in a 30-second spot purchased by Focus on the Family, a conservative Christian organization. Though an illness threatened the life of her unborn son during missionary work in the Philippines, she rejected recommendations to have an abortion. Forget for a moment that during the time Pam Tebow was pregnant, abortion was not legal under any circumstances, Liliana Segura points out in her AlterNet.org piece on the subject. Not only was it illegal, anyone administering the procedure or receiving it was looking at serious jail time. But who needs facts when you're trying to make a point?

The 30-second spot hasn't publicly aired yet, but it's already being talked about – not just because of its anti-abortion stance but because of CBS' hypocrisy in running it. In the past, the Super Bowl ads were limited to such wholesome products as beer, cars, tools, fast food, the Army, and just about anything featuring a scantily clad girl. So-called "issue" ads or advocacy ads are supposedly off limits on CBS and other broadcast networks in general, and especially on Super Bowl Sunday. In the midst of the grumbling, CBS has apparently reconsidered its stance regarding advocacy ads, but that did not stop it from shunning an ad from ManCrunch, an online dating service for gay men. (I saw the ad online. To be fair, the production values are weak, but the commercial itself, about two dudes watching a football game who make a love connection after their hands meet in the chip bowl, made me laugh out loud.) In the past, CBS nixed a Super Bowl ad from the United Church of Christ that promoted its welcoming of gays and lesbians. Last year, NBC rejected an anti-abortion ad that used President Obama in the role of Tim Tebow as the revered "saved" child. PETA and MoveOn.org have also been denied airtime, using the "no advocacy ads" mantra as the reason. So when Focus on the Family broke through the barrier, eyebrows and tempers were raised.

At press time, petitions were circulating online, including one issued by the Feminist Majority Foundation, demanding that CBS not "feed the anger and hatred of anti-abortion extremists." Personally, I wouldn't mind if CBS ran the ad, as long as it also allowed ads from other advocacy organizations to air, not just the conservative ones. I'm not sure if any of these petitions will have any traction or if CBS will respond, but the one thing the company will pay attention to is the bottom line. What if CBS held a Super Bowl party and nobody came? What if viewers stopped watching CBS' series? What if viewers actually demanded that the network respond as a responsible custodian of the airwaves? In a more perfect world, the broadcast airwaves would be used for the public good. Federal Communications Commission regulations aside, that means allowing the public to decide for itself what issues it chooses to support, rather than the network deciding, either by omission or by catering to any particular point of view, left or right. It's not impossible to expect this of our broadcast networks, but it demands caring about issues beyond which is the funniest, slickest, or coolest Super Bowl commercial.

After a Fashion: Top 10s 2011
You know that Your Style Avatar's tops are always bottoms, yes? 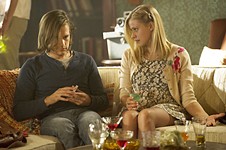 I Like to Watch
Counter-programming for the Big Game