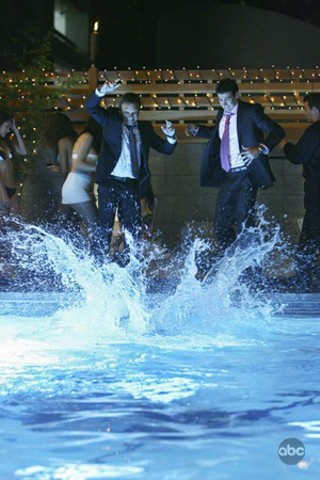 "The first thing we do, let's kill all the lawyers."

Shakespeare's oft-quoted line from Henry VI is usually interpreted as a mockery of lawyers. In the context of the play, it is really high praise for those who uphold the rule of law for all. However, after viewing The Deep End, the newest law firm drama to hit the airwaves, the critical interpretation of the Bard's words may be more appropriate.

At the core of this series is a group of young lawyers, fresh out of law school, ready to start their careers. The newbies have landed their dream jobs at the high-powered Sterling Law Firm. Dylan (Matt Long, last seen in the superb but short-lived Jack & Bobby) is the most wide-eyed. He has a penchant for crying "no fair" to his superiors, but he means well and works hard under the impossible circumstances he's thrust into. Colleague Addy (Tina Majorino, Big Love) is a pushover until she discovers her backbone and earns a small piece of turf. The least likable of the newbies is Beth (Leah Pipes), whose sense of entitlement is galling. And then there's Liam (Ben Lawson), who just can't seem to keep his penis in his pants. Fortunately, Liam and especially Beth make up for their self-absorption by being tortured by ethical dilemmas. And seeking the guidance of their elders, who are thoroughly lacking in humanity, gets them no help. But no one is as awful as the shark tank of senior associates the newbies toil under.

Billy Zane (the baddie from Titanic) has built his career playing foul-hearted cads. Here, he does it again as Cliff Huddle, the associate who's been running the firm in the absence of its namesake, Hart Sterling (Clancy Brown, Carnivàle). While Sterling was tending to his terminally ill wife, Huddle has been molding the firm into a moneymaking machine with the help of his toady, Rowdy (Norbert Leo Butz). Rowdy is the fast-talking associate who lured the young ones to the firm, promising guidance and mentoring, only to cut them off at the knees at every turn. He may have the most complicated relationship at the firm. Brought on by Sterling, a lawyer who still believes in justice for all, Rowdy finds himself swinging between both poles as he tries to placate Sterling while enjoying the spoils that working for the cutthroat Huddle brings.

The other senior member of the firm is the imperious Susan Oppenheim (Nicole Ari Parker). She's married to Huddle and is the only thing keeping her husband and Sterling from tearing each other's eyes out in their burgeoning power struggle. The fifth newbie that will surely become the ball Sterling and Huddle bat between them is Malcolm, played by Austin native Mehcad Brooks (see "He's Not a Lawyer, But He Plays One on TV," p.39). Hired outside the normal process, Malcolm is already out of step with the other newbies and likely to make Huddle go for the invisible mustache he always seems on the verge of twirling sinisterly.

With a few splashes of color and some wilder clothes, this could be the law firm version of Ugly Betty, the big difference being that The Deep End intends to be mostly serious, while Ugly Betty is a caricature of the high fashion world. Yet, in spite of its primary-colored depictions, I actually like The Deep End. It makes me giggle. I'm not sure I'm supposed to be giggling all the times I find myself giggling, but I'm having a good time, nonetheless.

Jan. 17: Human Target. Mark Valley (Fringe) stars in this new drama based on the DC comic. The two-hour, eighth season premiere of 24 follows, both on Fox.

Jan. 25: Damages returns for a third season on FX.

And lastly, the 67th Annual Golden Globe Awards, hosted by Ricky Gervais, will be telecast live on Sunday, Jan. 17, on NBC.

He's Not a Lawyer, But He Plays One on TV
Austin actor Mehcad Brooks on his circuitous path from star athlete to Southern vampires and L.A. law on an Irving soundstage 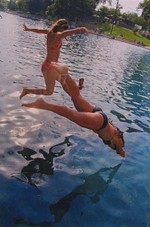 The Deep End
A refreshing, loving look at summer culture from photographer Will van Overbeek and watercolorist Melissa Grimes