The Body as Canvas, Readying for Life in a Kill Zone 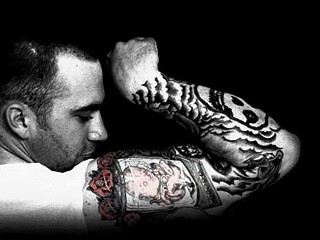 In Tattooed Under Fire, a young soldier shows off his deeply inked body and says to the camera, "This is my storyboard." It's an eloquent and apt summation of the storytelling aspect of tattooing, and the moment is one any filmmaker would know was golden. Nancy Schiesari recalls her reaction: "I thought: 'Wow. A film student would come up with something like that.'"

In fact, the documentarian and University of Texas professor would bring a whole crew of film students with her to weekend shoots in Killeen, Texas – 20-year-old kids hauling equipment, holding boom mics, recording the stories of 20-year-old kids embroidering their bodies with tattoos, steeling their minds for tours of duty in Iraq and Afghanistan.

Tattooed Under Fire profiles Killeen's River City Tattoo shop, its deeply caring staff, and six Fort Hood soldiers who spend time in the chairs before going to war, individuating their bodies in a community that insists on conformity. Schiesari recently sat down with the Chronicle to discuss her award-winning film, which will screen Jan. 20 as part of the Austin Film Society's Documentary Tour series.

Austin Chronicle: The film is about the intersection of two very traditionally tough communities – the military and tattoo culture. How did you break into those worlds?

Nancy Schiesari: I got into it because, first of all, the owner, Roxanne Willis, and her ex-husband, Glen, who's the senior artist in the film, welcomed me to do the film. They thought it was a great idea. These people are incredibly smart. And they've seen this for many years. They've experienced a war, Vietnam, and now these wars. And both of them are very educated. Roxanne has a master's in psychology, and Glenn has a degree in anthropology from UT. So they knew exactly what was going on; they knew exactly what the significance of the tattooing is. I mean, they're sages in their own way. So they opened their doors and made it very easy, no problem at all. Plus, I cast very well when I crew people. I always took with me young people – either my students or ex-students or whoever had a genuine curiosity to know what it's like for another person their age to go to war. So I would stand around with these 20-year-olds who were my crew, and I could tell they weren't there just to do a job. It was something that for them was fascinating. Plus they understand tattooing; I mean, just about everybody [of their generation] has a tattoo.

AC: You teach 16 millimeter film at UT, but you shot Tattooed Under Fire on digital video, right?

NS: On [Sony] PD 150s/170s. The lowest possible technology, 'cause those are the cameras that everybody had. It made it really easy to grab a camera and go up on a weekend and hang out.

This technology has made it possible for women especially to make documentaries. ... I've seen women M.F.A. students, documentary filmmakers, come up with phenomenal stuff early on when the technology got to be much smaller and when the flip-out monitor happened.

When I started shooting, I was shooting on 16 millimeter, shooting documentary on film in places like Africa and Pakistan. And then it went to Beta, which was also a big deal on your shoulder with your eye in the eyepiece. And so with the camcorder and the flip-open monitor, you're sitting there and you're really interacting with [interview subjects] for the first time. You're keeping your eye contact with them. So you look at the frame and then you look up at them. It's a whole different experience, and it's one that women have been able to enter a lot more easily because the technology has made it a lot more unobtrusive. Women tend to be less obtrusive; they tend to traditionally be listeners. All the qualities women have been fighting against having – being "passive" – are the ones that give you the best results in documentary. Because it's about channeling who's in front of you. Being present to their pain, pride, whatever they want to express.

AC: Have you had to change your approach with the switch to video?

NS: Well, I've been shooting documentary for other people for years and years. My first love is cinematography. And I started making [my own] documentaries because nobody else was making a documentary on that subject or because, you know, why not? And they all tended to be films about people using a medium which isn't necessarily considered high art but that has some creative strand to it. In my first film, it was a Republican flute band that learns how to play the fife and drum in Glasgow to go and support the IRA in Belfast because they're of Catholic descent. ... And then the second film was Hansel Mieth: Vagabond Photographer, and that was a woman who was an artist and photographer, but she used it as a means to express what was going on around her. She used art, she used photography, as a means to take part in a cultural/social/political experience and to try to make a difference through her art.

And then tattoo is a form of art practice on the body. It was a way of channeling their feelings about the war and about what was going on in their own lives. It was using art again as a way of talking about things that don't necessarily have a voice but speak a language.

AC: How did you go about deciding which soldiers to profile?

NS: When you walk in a tattoo parlor, there's about five or six people getting tattooed. I would kind of cruise. I would wait. I would establish eye contact with the people in the chair. There was a magnet between the ones that were creative and intelligent and wanted to talk. So I tended to gravitate toward these ones. It was just short, quick eye contact, but I knew that they were the ones that would be the ones that were good to talk to. And they were all really smart, articulate, and talented people.

AC: So you basically got a good feeling.

NS: To be honest, I avoided the macho ones, the scary ones. The heavy-duty guys that looked like Marines. They scared me. [Laughs] But then you get someone like Jonathan in the film, who admits to killing a child [in combat], and he's pretty tough. He's beaten up quite a few people. Killed a few people in his life.

AC: Jonathan, who suffers from post-traumatic stress disorder and has done multiple tours, says in the film, "The more times I go to Iraq, the more of Iraq that comes back with me." When you started the project, did you have any idea PTSD would become such a dominant theme to the film?

AC: As a filmmaker, how do you stay objective in the face of that?

NS: I didn't hold back my feelings; I didn't try and direct [the soldiers] so much as react to what they said. So it was a conversation. I would [ask them], what did it feel like to have to do what they did? Did they ever feel sympathy for the enemy? Things that wouldn't necessarily be patriarchal questions to ask, I would go there with them. And they would answer.

AC: Did you ever feel like you had to pull yourself back?

NS: No. They would ask me: "What's your opinion about the war? Do you think we should be there?" And I would go, "You know what, I'm really not sure." 'Cause you don't know the whole story. I said: "I'm anti-war. I'm against war anyway, because it involves killing people." As Travis [a 23-year-old combat medic] says, "I'm either going to kill a whole bunch of people, or my ass is going to die." It's a no-win situation.

AFS Documentary Tour presents Tattooed Under Fire with filmmaker Nancy Schiesari in attendance Wednesday, Jan. 20, 8:30pm, at the Alamo Drafthouse at the Ritz. Tickets are $4 for AFS members and $6 for the general public. For more info, see www.austinfilm.org.

TV Eye
Cleaning Out the Inbox