Neorealism, Now and Then, in Troubled Lands 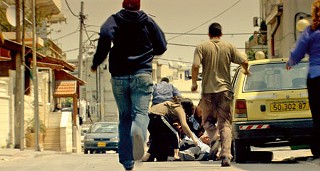 It's hard to believe it's been three years since the Austin Film Society premiered its first Middle Eastern film program, Children of Abraham/Ibrahim, as part of the Essential Cinema series. Yet here we are, three years older, and here AFS is, with a fourth batch of movies to screen, while over there, Jews, Muslims, and Christians are three years deeper into a 1,500-year-old calamity of violence and inherited hatred that's starting to look like it really won't be resolved until Judgment Day.

Thankfully, human beings have a remarkable capacity for turning pain into poetry, and sometimes the upside to great tragedy is great art. Two films from this year's slate – the once-banned 1958 film Cairo Station and Ajami, which was released last year and promptly swept the Ophir Awards, the Israeli equivalent to the Academy Awards – are proof of that truism. Both are masterpieces that, like all great social art, speak to and transcend their eras. In Cairo Station, the setting is 1950s Egypt, a time when an ancient religious society was struggling to adapt to a rapidly changing world of commerce, opportunity, and social mobility. Ajami, meanwhile, takes place in present-day Jaffa, a crime-ridden, drug-infested, multicultural section of Tel Aviv that harbors both age-old grudges and all the mayhem of a modern major metropolis; imagine Detroit transplanted to Rwanda.

At the heart of these two movies, and at the heart of the region they come from, lie intractable dualities. Tradition vs. modernity. Society vs. the individual. Religion vs. compromise. In Cairo Station, about Egypt's marginalized urban poor, an ancient caste system is under attack by the forces of commercialism, capitalism, and a new rock & roll youth mentality. An impoverished, crippled newspaper peddler named Kenaoui (played by the director, Youssef Chahine) falls in love with a voluptuous but cruel lemonade seller named Hanouma (Hind Rostom) who works at the same train station he does. Overcome by his obsession, Kenaoui grows more and more desperate, until his scorned desires turn murderous. Meanwhile, Hanouma's handsome fiancé fights to unionize his fellow train porters, provoking the ire of those who refuse to accommodate the demands of a changing, secularizing world.

I don't know if Israeli writer/directors Scandar Copti and Yaron Shani have seen Cairo Station or, if they have, whether it affected the way they shot Ajami, but there's no doubting that their movie owes Chahine's an enormous debt. If Cairo Station opened the door to socially conscious neorealist film in the Middle East, then Ajami has shot it off its hinges.

Like City of God, Amores Perros, and Gomorrah, Ajami is the story of a violent ecosystem where seemingly unrelated characters collide in unexpected and often tragic ways. The film revolves around the lives of three beautifully drawn but irredeemably damaged characters: the first, an Arab Israeli who resorts to criminal means to come up with the money to pay off the gangsters threatening his family; the second, a Palestinian who works illegally in Israel while trying to find a way to pay for his mother's bone marrow operation; the third, a Jewish Israeli policeman coming to grips with the murder of his brother and that realization that the streets he patrols are being lost to the casual violence of the drug trade. Watching their separate collapses dovetail is like watching the whole sordid, inevitable, pathetic story of modern Israel play out writ small.

In Ajami's interlocking, Balzac-like world where family, tradition, tribalism, revenge, and history weigh like a thousand-pound stone on the backs of the living, the possibility for redemption is slim, nearly nonexistent. But the film doesn't succumb to despair, even when its characters do. On the contrary, it is so full of life as to almost transcend the boundaries of its historical context. I say "almost" because when you're trying to find redemption in Israel, that's the most you can reasonably hope for. More than that and you're dooming yourself to 1,500 more years of disappointment.

The series runs Tuesdays at 7pm at the Alamo Drafthouse South Lamar. Admission is free for AFS members and $6 for nonmembers. For more info, visit www.austinfilm.org.