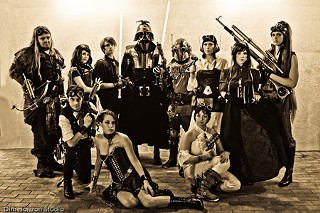 The first weekend in January, Austin embraces its inner otaku again as the IkkiCon Japanese Animation & Pop-Culture Convention returns for its fourth annual celebration of all things manga, animé, and culturally Nipponese. But don't go thinking it's just three days of Hello Kitty: As convention founder and Chair Michael Loredo puts it: "Animé shouldn't be classified as its own genre. It has action, drama, comedy, the whole nine yards."

Even though Japanese animation (animé) and graphic fiction (manga) have penetrated American culture, it's still hard for some outside of fandom to understand the appeal. When he tells people he runs an animé convention, Loredo says: "I get one of two responses: 'Oh, you're doing cartoons for kids?' or 'Oh, you're doing porn.'" Even among the more culturally literate, he adds, "people try to compare animé and comic books. But it's really just this decade that comic books have hit the entertainment industry, as opposed to just being on paper. Animé has always existed in comic books and TV and in media, movies, music. It's the pop culture of a country."

So how did that culture reach from Japan to Central Texas? Loredo recalls, "Everything for me started as a fan, like it does for most people." Growing up in Bastrop, he started an animé club in high school and parlayed that into a fan-friendly merchandise store. After three years, he shut up shop ("I got tired of trying to compete with Wal-Mart," he says), and in 2007 he decided to attempt a convention. IkkiCon (the name is a play on hit high school martial arts franchise Ikki Tousen) started as a near-accidental replacement for Austin's previous major animé gathering, Ushicon. Loredo says: "I announced that I was going to do some form of convention. The very next week they announced that they weren't coming back."

With local animé fans looking for a new gathering, the first year of IkkiCon, Loredo admits, was a skin-of-the-teeth affair with a steep learning curve. He says: "Most companies start with some form of capital. I started with my first paycheck from Little Caesars." The organizers estimated they might sell 500 tickets and dreamed of 1,200 attendees. Instead, 2,500 fans came, and now IkkiCon is entering its fourth year. Even in that short time, Loredo has seen a continuing change in the animé fan base. It used to be men in their late teens to mid-20s, but, he says, "the main demographic now, which makes up to about 65 to 70 percent of the [audience], is 12- to 16-year-old girls."

It hasn't always been so easy to get good animé in America. Back in the Seventies and Eighties, viewers had to make do with imports like Battle of the Planets, a kid-friendly but bastardized and poorly dubbed remix of sci-fi epic Kagaku ninja tai Gatchaman. Hardcore animé aficionados depended on tape trading, the odd arthouse cinematic release, and sporadic manga reprints by U.S. publishers. Now there are multiple dedicated publishers and DVD distributors, and both Adult Swim and the SyFy channel give over whole nights of cable broadcasting to imported Japanese shows. The animé influence is also ubiquitous in American animation (the superdeformed comedy Nicktoon's Kappa Mikey, Samuel L. Jackson's blood-splattered Afro Samurai, the martial-arts mystic Avatar: The Last Airbender). What's less obvious is how much attention the Japanese studios pay to the U.S. market. It was American viewers, Loredo explains, that saved Samurai 7 – a steampunk riff on Akira Kurosawa's classic: "It got to the third episode in Japan, lost funding, and was about to be canceled. [U.S. distributor] Funimation bought the licensing to it. That allowed them to finish the series."

The convention is not just an excuse to watch animé or buy manga. Celebrity guests this year include a double bill of Mighty Morphin Power Rangers, with Green Ranger and karate black belt Jason David Frank in attendance, plus Black Ranger Johnny Yong Bosch bringing his band Eyeshine. There are also celebrity cosplayers. To some Occidental eyes, that's just people dressing as animé and pop-culture characters, but in Japan, it's regarded as performance art. Meredith Placko, better known on the convention circuit as Ana Aesthetic, is back for her second year at IkkiCon, but her fascination with animé goes back to middle school, when the Florida native fell in love with Spanish-dubbed broadcasts of shows like Galaxy Express 999.

Since attending her first animé convention (Anime Weekend Atlanta in 1999), she has become a regular on the ever-expanding convention circuit, famous for her elaborate costumes, such as Suigintou from animé series Rozen Maiden and Zero Suit Samus from Nintendo's Super Smash Bros. Brawl. A broadcast journalist and voiceover actress by trade, Placko says producing her own outfits is a handy outlet for her college background in costume design. When she and her friends started, "we just thought it would be fun to dress up as our favorite characters," she explains. "But then there was this whole entire world of people who dress up in these bright and colorful costumes from video games and comics. It was so much fun, being silly nerds and having our pictures taken."

This year Placko and her fellow cosplayers from Outland Armour will don their steampunk/Star Wars mash-up costumes. It's a fan favorite, but she admits that, like much of her hobby, it still baffles one person – her mother. Placko says: "She's just like: 'Have fun. At least you get to travel and do things that most other people don't.'"