The Season for Nominating

It's the end of an old year, so you know what that means – a new awards season is near. The Writers Guild, the Golden Globes, and the Screen Actors Guild recently announced the nominees for their respective soirees, which provided some holiday cheer to the recipients and started deliberations on who might win what and why.

As always, let me start with the writing noms.

Glee is somewhat of a surprise here, only because of its unconventional pilot launch, followed by a long summer hiatus, and then a fall return to the air (where it has built a faithful following). Of the two newcomers, my favorite is the consistently strong, funny, and often touching Modern Family. They nail it week after week.

The Writers Guild Awards will be presented Feb. 20.

A couple of things that make the Screen Actors Guild awards different from the rest is that a lifetime achievement award is the centerpiece of the ceremony, which also includes ensemble acting awards in addition to awards for individual performances. This year's Life Achievement Award goes to the delightful Betty White (The Golden Girls). Nominated drama ensembles include The Closer (TNT), Dexter, The Good Wife (CBS), Mad Men, and True Blood (HBO). Nominated comedy ensembles include 30 Rock, Curb Your Enthusiasm, Glee, Modern Family, and The Office.

Breaking Bad fans will be displeased that the show, along with lead actor Bryan Cranston, has been excluded from the Golden Globes' nominees. Big Love (HBO) (and its star Bill Paxton) did make the list, alongside House (Fox), Dexter, Mad Men, and True Blood. Newcomers Glee and Modern Family show up on the Globes' Best Comedy list, along with Entourage (HBO) and NBC series The Office and 30 Rock.

Golden Globe nominees for lead actors include all the leads of the aforementioned dramas, with the addition of The Mentalist's Simon Baker; no one from True Blood made the cut. For lead actresses in a drama, January Jones (Mad Men) and Anna Paquin (True Blood) join Close, Margulies, and Sedgwick. The Globes part ways from the norm in the lead actor in a comedy category. Thomas Jane of Hung (HBO) and Glee's Matthew Morrison join Californication's (Showtime) David Duchovny, Carell, and Baldwin. Glee's Lea Michele shows up on the best actress in a comedy roster, along with Cougar Town's Courteney Cox. Collette, Fey, and Falco complete the list.

The 67th Annual Golden Globes will be awarded Jan. 17. The live telecast of the show begins at 7pm on NBC. 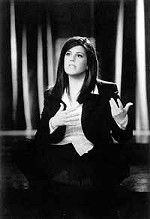 TV Eye
To Tell the Truth