Diane Keaton takes her life to the stage

Diane Keaton will appear on the stage of Austin's Paramount Theatre this Friday, offering what the venue's program listing describes as "first-hand insight into the life of a Hollywood actress, director, and conservation and restoration enthusiast." With curiosity duly piqued, the Chronicle spoke with the screen legend by phone to better understand what was in store for the evening.

"I'm going to have a little chat about my life," Keaton offers by way of explanation. "It's me with many clips, really the story of my relationship with my mother and my life. That's all. It's like a spoken memoir." When asked for more hints, Keaton replies: "Well, I lost my mother last year, and she really was, of course, the most significant person in my life. So I'm talking about women's relationships to their mothers, which I think is underexamined."

In some ways, I gleaned more from our conversation about what Keaton's show will not be: no gloves (the famed fashion icon is "off the glove thing now; they're too dense"), no singing ("I will not have accompaniment, it's not really a concert," says the Oscar-winning actress who counts singing, photography, film directing, and producing among her artistic accomplishments), and no stripping (the performer who took off all her clothes in the 2003 film Something's Gotta Give is still the same actress who, in her first stage job on the original set of Hair, chose to not get naked along with other cast members in the counterculture show's exuberant finale).

If talking about herself does not seem to be her favorite thing, Keaton turns animated when discussing her involvement in architectural restoration and preservation. (She is on the board of the National Trust for Historic Preservation and "can't wait" to see the Paramount.) "I live in Southern California, and here, we have a lot of Spanish-style homes that were built in the Twenties by great architects, and they're absolutely spectacular. Of course, many of them have been taken down for the wrong reasons, and so what I've done is basically restore about four of these Spanish houses. I'm also on the board of the L.A. Conservancy, in an effort to save significant landmarks and also in an effort to create a survey so that people know what is historic and what isn't. We can't keep tearing down these structures randomly. I feel very protective of Los Angeles and, specifically in regard to personal dwellings, homes. This is an important part of my life."

Diane Keaton will appear Nov. 6 at 8pm at the Paramount Theatre. For more information, see www.austintheatre.org. 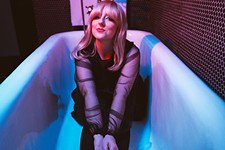