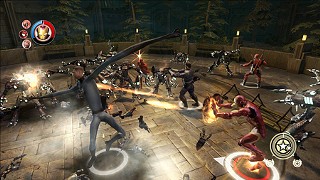 When did the party die for gamers? When did video games begin to forgo two-player options for online play? How come I can't play a top-of-the-line racing game on a split screen anymore? I know some of the reasons – computing power being the main culprit with the graphics-laden games of today – but a racing game without a same-system two-player option is intrinsically broken in my mind.

Picking up the slack, of course, are the Wii and music games like Rock Band that use a more natural controller system to suck in the nongaming community. As an experiment, I gathered a panel of friends ranging from experienced gamers to a deprived man who had never played a video game outside of an arcade ever. The goal was to see what recent multiplayer games have to offer gamers and the ungaming masses.

First up was the Olympic-themed Deca Sports 2 (Konami, $30) for the Wii. The Wiimote, as usual, became the great equalizer. The imprecision of the controller made speed-skating and road-racing neck and neck almost every time, regardless of previous experience. We never got the hang of the controls for mogul skiing or dodgeball (a painful disappointment), but ice hockey and synchronized swimming simplified the gameplay just enough to make them accessible and entertaining. Overall, the 10 games were spotty at best, but we found the games' limitations to be the most fun. Failing garnered as many laughs as winning did cheers.

The promisingly titled Game Party 3 (Warner Bros., $30) offered simple games that took us from the lounge (darts, billiards) to the country club (minigolf, racquetball) and out to the sports zone (quarterback challenge, hoop shoot). You would think that what makes carnival games or beer pong fun is the proximity to a carnival or beer or, for a double whammy, a Dave and Buster's. In fact, these games (and Wii simulations thereof) can be fun on their own – especially when your friends are the opponents. We started with the hoop shoot that involved shooting baskets repeatedly, resulting in sore arms if played more than twice in a row. After much name-calling and less-than-family-friendly trash-talking (inappropriate for any game rated "E"), there were often calls for a rematch. However, there were 18 other games to be played. Darts and minigolf stood above the rest in that they rewarded practice without an undue amount of frustration, adding to an uncomplicated and enjoyable Wii title.

Switching over to the PlayStation3, we four grabbed our controllers and took control of comic-book heroes in Marvel Ultimate Alliance 2 (Activision, $60). This more immersive experience made quick fans of us for its chaotic play and the inescapable geek-out factor. MUA2 rewards communication and teamwork with passage to more powerful enemies. The action gets bogged down in plot-driven cut-scenes occasionally, but they are helpful as bathroom breaks or team strategy sessions. Marvel became the biggest hit of the night – for the gamers and the n00bs – with more shouting and a greater sense of victory than the Wii titles. The only thing that slightly spoiled this game night with friends were arguments over who got to play as Wolverine.